The power of one: Milton Friedman won all debates except one

???It is incredible the quantity of good that may be done in a country by a single man who will make a business out of it??????
–Ben Franklin (1783)

On Tuesday evening, July 31, over 300 people met in the ballroom of the Drake Hotel in Chicago to celebrate Milton Friedman???s 100th birthday.  The dinner was sponsored by the Friedman Foundation for Educational Choice.

I decided to join in the celebration since Milton meant so much to me over the 20 years that I knew him.  I was in fact perhaps the last person to have lunch with him in 2006, a few weeks before he died.  He admired my book ???The Making of Modern Economics.???  He once said, ???All histories of [economic] thought are BS — Before Skousen.???  Not bad! 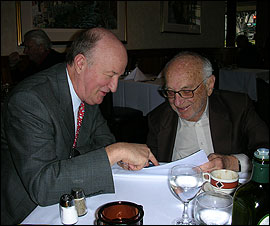 Mark Skousen having lunch with an unshaven Milton Friedman at his favorite restaurant in San Francisco in 2006. (Photo credit:  Van Simmons)

I had a lot of fun at the dinner circulating this photo of Milton Friedman along with George Stigler, his academic sidekick at University of Chicago, and John Kenneth Galbraith.

It???s not often that we celebrate famous people after they die, but Milton Friedman was a role model for how to get things done and change the world.  The Economist called him the most influential economist of the second half of the 20th century, and certainly the most serious opponent to Keynes and big government.  His major work, ???A Monetary History of the United States,??? co-authored with Anna Schwartz (who died a few months ago), changed the way economists and historians view the Great Depression.  Because of Friedman???s meticulous research, the biggest economic catastrophe in American history is now viewed as a failure of government policy, not free enterprise. 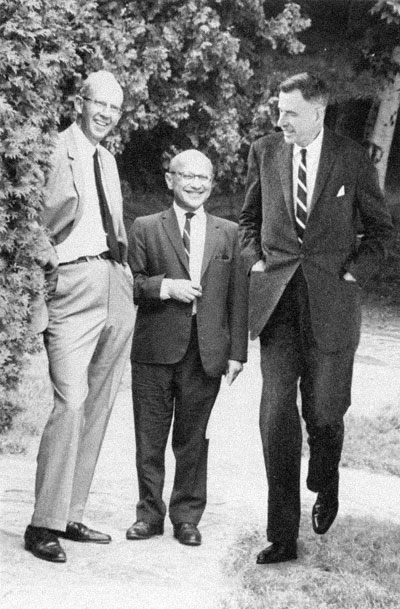 Friedman wasn???t a Quixotic academic tilting at windmills but actually changed policy.  He was a practical political economist.  Patrick Byrne, the chairman of the Friedman Foundation, sponsor of the event, credited Friedman for creating the all-volunteer army and ending the draft.  He referred to this famous story, retold here from Milton and Rose Friedman???s memoirs, ???Two Lucky People.???

???In the course of his [General Westmoreland’s] testimony, he made the statement that he did not want to command an army of mercenaries. I [Milton Friedman] stopped him and said, ‘General, would you rather command an army of slaves?’ He drew himself up and said, ‘I don’t like to hear our patriotic draftees referred to as slaves.’ I replied, ‘I don’t like to hear our patriotic volunteers referred to as mercenaries.’ But I went on to say, ‘If they are mercenaries, then I, sir, am a mercenary professor, and you, sir, are a mercenary general; we are served by mercenary physicians, we use a mercenary lawyer, and we get our meat from a mercenary butcher.’ That was the last that we heard from the general about mercenaries.”

Robert Enlow, president of the Friedman Institute, demonstrated how Friedman???s influence continues to this day.  The Friedmans decided in the late 1990s to focus in on school choice (vouchers), a winnable line of action compared to, say, privatizing all the schools, going back to the gold standard, or abolishing the income tax.  Friedman was famous for advocating ???second best??? solutions, such as the flat tax, privatizing Social Security, and the negative income tax as an alternative to the welfare system.

Enlow recounted the remarkable advances being made in state after state in school choice.  He pointed out that 18 states now offer some form of school choice.  In the audience were quite a few people who were spearheading the school choice program in various states, many of them black Americans.  For more information, go to http://www.edchoice.org/

The keynote speaker for the evening was Condolezza Rice, former Secretary of State under President George W. Bush.  She praised Friedman for helping to ???change the course of history??? and boldly declared, ???School choice is a civil rights issue.???  She said she was inspired by Milton and Rose Friedman and their ???simple idea that free markets and free people will rule the world.???  She recalled the history of the post-World War II era, from the deep pessimism of the cold war to the optimism coming out of the collapse of the Soviet Union.  But she wisely avoided discussing the more recent contentious times of the Bush Doctrine (Iraq and Afghanistan wars), the huge deficits, and ???No Child Left Behind??? legislation, all of which the Friedmans opposed.

Secretary Rice recalled a conversation she had with Friedman in 1991.  He asked her, ???Did you ever think that the Soviet Union would fall????

Milton was known as a fierce debater without peer.  Yet I thought I bested him once in the mid-1980s when the two of us went out to lunch at a conference in Laguna Beach, California.  We talked about economic and political issues of the day, and had a great time.  At the end, I paid the restaurant bill for both of us and said triumphantly: “See, Milton, you are wrong. There is such a thing as a free lunch because I???m paying for yours!”  But quick as a flash, Friedman replied: “Oh no, it was not a free lunch. I had to listen to you for two hours.”

I tell this story and several others, including the time I tore up Milton Friedman???s $20 bill, in this tribute:  http://www.mskousen.com/2007/09/my-friendly-fights-with-dr-friedman/