Or the Sun gun was apparently a plan by a late war group of German scientists to place a space station equipped with a 100-meter-wide mirror in orbit that could then be targeted to reflect a concentrated ray of sunlight onto the Earth, presumably destroying anything in its path. The idea didn???t get much further past the fantasies of the scientists who thought it up. Nonetheless, according to a 1945 Time magazine article, the plan was taken seriously enough by the Allied forces that the scientists were rounded up and questioned about the project. However, the scientists theorized the project could have been completed if they had only had 50 to 100 more years.

“I hereby voluntarily apply to be enrolled in the suicide group as part of a human glider-bomb. I fully understand that employment in this capacity will entail my own death.” All volunteers were made to sign this oath before joining the Fi 103R Reichenberg program. Nothing more than a piloted V-1 flying bomb, the Fi 103R Reichenberg was (although pilots were issued parachutes) a suicide bomb. The project was scrapped before it could be taken into combat as the V-1 was unsurprisingly found to be rather uncontrollable and all test flights ended in crashes.

The Landkreuzer Monster was, as its name suggests, a monster of a design. The largest of a few similar designs, essentially, the plan was to make the 800mm Schwerer Gustav railway gun into a tank. The 1,500 ton, 138ft long, 59ft wide and 23ft high Landkreuzer Monster was to crew over a hundred men and possess a sizable armament beyond the 800mm main gun of a further two smaller howitzers and dozens of anti-aircraft canons and machine guns. It was to be powered by four diesel engines used in U-boats and travel at a ???land cruising??? speed of a little over nine mph. However, as the Schwerer Gustav already cost the German war machine 7 million Reichsmarks, it is plain to see why the project never got further than the drawing board.

Not much is known about the luftkanon, however, it was said to have been conceived of as an anti-aircraft weapon that used a concentrated blast of air to destroy or at least force enemy aircraft off course. One functioning weapon may have been built, however, the luftkanon is said to have proved largely ineffective at the ranges necessary for anti-aircraft defense. Although, the design was not all in vain as its smaller descendant of a similar name at least provides hours of enjoyment for children. 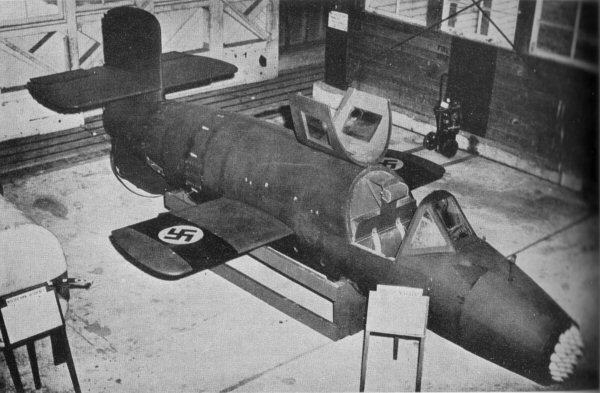 The Bachem Ba 349 Natter was another attempt at a rocket-powered interceptor. However, unlike the other designs it was built to intercept enemy aircraft more like a surface-to-air-missile. The rocket was guided to the target via autopilot where the pilot would then be responsible for lining his rocket up with the target bomber and fire his payload of smaller rockets, located in the nosecone. At least in theory, the pilot was meant to survive by jettisoning himself and the fuselage after the attack, however, the only test flight resulted in the pilot???s death, ending the project.

The German military has always had in affinity for “superguns.” In World War I it was the Big Bertha and the Paris Gun and in World War II, it was the Gustva and Dora railway guns. However, towards the end of World War II, the Germans set out to build an even larger gun, the Vergeltungswaffe 3. The V3 was to be the third in the vengeance weapon series and was designed to hurl a 5.9ft long shell a little over 102 miles. Although several were constructed, the V3s never reached their promised rate of fire of 300 shells per hour and were quickly bypassed, proving largely ineffective in the modern wars of maneuver. 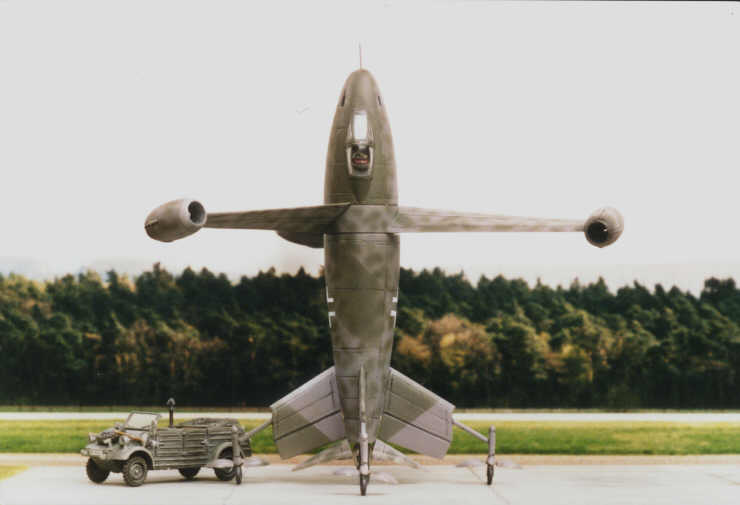 The Focke-Wulf Triebflügel was one of the more unusual designs to come out the end of days Nazi Germany. Possessing no wings, the planned interceptor used three rotor blades, each attached to a ramjet to achieve flight. It was meant to take off vertically and land the same way, however, landing would have proved a dangerous feat as the pilot, facing upward, would have been incapable of seeing the ground below him. 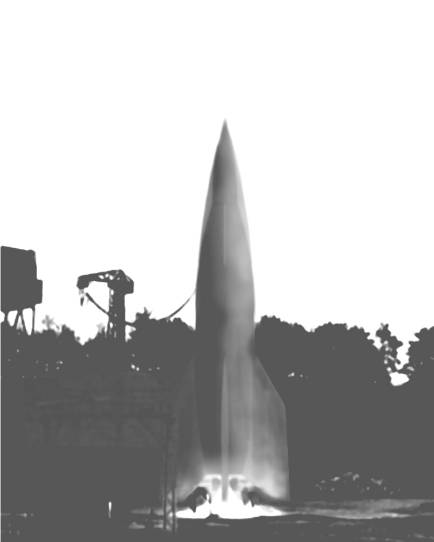 Another attempt at striking New York City came out of the Aggregate rocket family of V2 fame. The A9/A10 ???Amerika Rakete??? was an innovative marvel, conceived to be the first missile capable of intercontinental flight. But, while German missile technology was moving forward at leaps and bounds, its guidance systems were not. It was decided that for the Amerika Rakete to succeed in its goal before war???s end that it would have to be piloted. Luckily for those would-be pilots, the rocket never got past the test stages.

Towards the end of the war, Hitler became obsessed with bombing New York City. It was under this guise that project Silbervogel or ???Silver bird,??? previously passed over by the RLM was looked into with renewed interest. The proposal called for the construction of a rocket-powered aircraft capable of climbing 90 miles into sub-orbital flight where it would travel at over 3,000 mph, and carry an over 8,000lb bomb upwards  of 15,000 miles. But, the price tag and technical experience necessary for such an endeavor proved too costly for the cash-strapped late-war German Reich and the plane never left the drawing board, although, some of its concepts later provided the basis for post-war space travel.

The Me 163 ???Komet??? was essentially a glider attached to a rocket and at that, the only one of its kind to have ever seen combat. While not a particularly bad aircraft, in fact, outperforming any of the aircraft brought against it with its maximum speed of 596 mph, the Reich Air Ministry (Reichsluftfahrtministerium, RLM) placed ???wunder??? over practicality. The Komet???s awesome speed turned out to be a determent to its combat effectiveness as it would close on and overtake its targets in mere seconds leaving even fewer precious seconds for the attack.

The Declaration of Independence