George Washington is justifiably called the “Father of America” for his military and civilian leadership during the American Revolution and his two terms as America’s first president, however, in the new book, George Washington???s Military Genius, General David Palmer persuasively argues that Washington’s strategic military talent was key to his success.

Gen. Palmer, who is a former superintendent of West Point, attempts to bust the myths surrounding Washington???s American Revolutionary War experience and to put the accomplishments on the battlefield in perspective.

Some historians view Washington as an incompetent bungler who merely got lucky in a few engagements with the British, and basically won by surviving. Some biographers simply overlook Washington???s wartime experience and simply recognize his political leadership.

The editor-in-chief of the Papers of George Washington, Edward G. Lendel, described Washington as ???not a great tactician??? and ???not a creative military thinker.??? Lengel said of Washington as a soldier was ???erratic but competent.???

On the other side of the coin, some have claimed that Washington was lax and unaggressive, using a Fabian strategy of non-engagement to wear down and tire out his British foes.

In George Washington???s Military Genius, Gen. Palmer claims that Washington was a masterful strategist who brilliantly adapted to the changing circumstances of the war.

The truth is that George Washington sent three very able British generals back to England, one of which, Gen. Charles Cornwallis, who went on to achieve great success commanding British armies in India.

First, Washington used his army aggressively, taking the fight to the British. In the first phases of the war, Washington had no reason to be cautious. The British had a fairly sparse number of troops and the ranks of the Continental Army were growing fast. Washington was able to win a stunning victory in the Siege of Boston, taking the city back from the British occupiers through encirclement of the city and the placement of artillery, which were hastily brought down from Fort Ticonderoga by Col. Henry Knox.

The next step of the war came when massive British and mercenary Hessian reinforcements showed up and Washington had to act cautiously to preserve his small army. During this time he employed a number of European advisers and professional military men, like Prussian drill instructor, Baron Friedrich Wilhelm von Steuben. Keeping the small American army intact was the key to sustaining the Revolution for both military and civilian morale reasons.

When French reinforcements arrived on the North American continent, Washington again turned to aggression, making his fateful siege of Yorktown, which drove the British military from the southern colonies.

Finally, when the British had been larger beaten and driven from the American colonies, Washington had perhaps his most difficult task of all in that he had to keep the American military from breaking apart and keeping them prepared for renewed British aggression. Perhaps more importantly, Washington had to prevent the military from violation the right of Congress to govern preserving the civilian control of the military.

Ultimately, Washington???s performance in the war was masterful and fox-like according to Gen. Palmer, and he is one of history???s most overlooked military geniuses.

The following is the Guns and Patriots interview with the author of George Washington’s Military Genius, Gen. David Palmer: 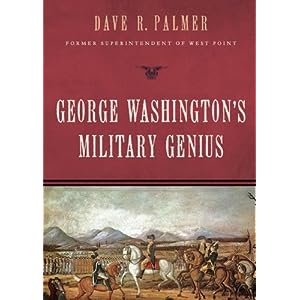 1.) Why did you decide to write George Washington???s Military Genius and what applicability does it have to Americans today?

I wrote the book to solve a mystery:  Why have respected historians reached such differing assessments of Washington???s ability as a general?  And why do they differ so on what the American strategy actually was?

The lessons of the book do have applicability to us today.  Notably, we should have a clearer understanding of how the nation was founded.  That is, we ought to be better versed in our own history.  Moreover, the example of military leadership provided by George Washington should help in the education of current and future military leaders.

2.)  Where do you believe Washington developed this gift for strategy? Was it during his days as a young Colonel fighting against the French? Did he have an able instructor in the art of war? Did he read specific books? Was Washington just born with innate strategic ability?

–As a very young officer, he observed and participated in two British campaigns into the wilderness of western Virginia against French and Indian forces.  He would have learned how to support a force away from its source of supplies and the necessity of security.  He would have learned the relationship of time and space factors in military movement.  Then, for years he was the commander of Virginia???s militia, charged with protecting the western frontier.  He would have learned lessons then that stood him in good stead in the Revolution.  For a while, he aspired to become a regular in the British army???so he studied and read.  Sort of the way lawyers once ???read the law??? to prepare for practicing it later.  Finally, he learned in the crucible of war itself from the British as he clashed with them, especially in 1776.  By 1777 he had a strategic grasp better than that of his opponents.

3.) Washington???s greatest defeat was perhaps the at the Battle of New York/Brooklyn where he has been criticized for attempting to defend the ???indefensible??? Brooklyn Heights, which was assumed to be vulnerable to British naval landings on the East River. You claim that Washington ???s strategy was sound and the retreat orderly. Was there really anything else that Washington could have done to save New York ? Should he have burned the city, which had a high number of Tories, to the ground?

Defending New York was a mistake, but understandable.  Until the British arrived with their expeditionary force in July 1776, Americans had no idea they would be facing so overwhelming a force.  The plans for defense were established by Charles Lee, a former British officer who was considered to be the most brilliant professional the Americans had.  He was not.  Washington learned from that experience.  Actually, Washington wanted to burn the city after he was forced to leave it, but Congress would not let him.  Most of it did in fact burned shortly after the British entered, but no one has ever figured out if it was done on purpose or not.  Washington was happy that it had happened.

4.) In comparison to other great commanders of his era and history in general, where does Washington place? How would you compare him to Napoleon Bonaparte?

This is impossible to do.  Changes in technology over the centuries, as well as differences in geography and resources, make comparisons seem apples and oranges.  However, it is feasible to measure how well a general did with what he had to work with and considering the opponents he faced.  In that regard, Washington was an absolutely superb strategist, the best the United States has produced, ever.  Interestingly, not long ago British scholars convened to list the best opponents their nation had faced over the centuries.  Such luminaries as Napoleon and Rommel (WW II) were on the list, but, at the top was???.George Washington.

5.) What is the single greatest lesson that can be learned from George Washington ???s military career?

Beyond a doubt, the single greatest lesson to be learned from Washington???s career is the decisive impact a great leader can have in war???and peace.  Without Washington in the equation, the United States almost surely would not have won the Revolution, and it surely would not have avoided a military dictatorship, or at least a serious threat of one, had he not been there at the end of the fighting to shape the peace establishment.