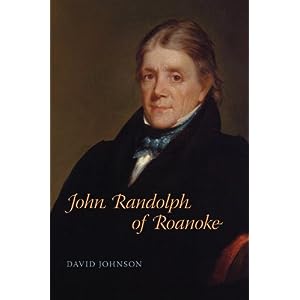 To understand America, one must have knowledge about the men and ideas that shaped it. A few individuals have proven to be bulwarks of liberty, unpopular for their contrarian ideas, but necessary in holding the American people to the cherished values of the American Revolution.

One such man was John Randolph of Roanoke, an early 19th century statesman who proved to be more Jeffersonian than his cousin Thomas Jefferson, and in genius rivaled men like the fabled British statesman, Edmund Burke.

David Johnson, who is the Deputy Attorney General of the Commonwealth of Virginia, has brought this eccentric character back from obscurity in the biography, John Randolph of Roanoke, which is part of the Southern Biography Series and is published by the Louisiana State University Press.

Although comparisons can be made between Randolph and some conservative and libertarian statesmen, Randolph was a one of a kind personality.

Even though Randolph suffered throughout his life with what Johnson believes was Klinefelter’s Syndrome, which is caused by the presence of an extra X chromosome and produces many physical abnormalities, Randolph became one of the most educated and rhetorically gifted men in America.

Randolph was active in Virginia and national level politics from 1799 until his death in 1833. During that time Randolph became one of the most influential men in Congress, and was the gadfly of nearly every presidential administration during that time. Originally a Jeffersonian Republican, Randolph would come to blows with both the dying Federalist Party and his old Jeffersonian allies. He would eventually become a man alone, and was called a “Tertium Quid” or “third thing”.

The following is author David Johnson’s exclusive interview with Guns and Patriots.

1.) Why did you choose to write about John Randolph?

We live in an era in which history is distorted by sound-byte summaries and political correctness. As such, many significant individuals are being consigned to historical twilight.  I thought John Randolph was too relevant to important issues to be forgotten.

What is it about Randolph’s life and political career that attracted you to writing a biography of him?

His life and career defy indifference.  He was the most fantastic character in a fantastic era. All who saw him felt compelled to describe him – not just his physical appearance, but his elegant language, lively mind, and remarkable philosophical consistency.  I came to view him as liberty’s greatest advocate and that is what prompted me to write his story.

2.) What kind of influence did John Randolph and other “Tertium Quids” have on national politics in the early 19th century?

It depends on how one defines “influence.”  If one means passing bills, appropriating money, and funding pet-projects, Randolph’s contemporary influence faded during Jefferson’s first term. If one means long-range impact on philosophy, Randolph’s influence as the architect of southern conservatism and true “republicanism” exists to this day.  In his own time, he lost more than he won, but these loses often slowed the trajectory toward centralized government and loss of liberty.

Why did Randolph split off from the rest of the Jeffersonian Republicans, and how did his politics fit in with the emerging Democratic Republicans and National Republicans?

A series of events – the Yazoo land fraud, the impeachment of Justice Chase, the attempt to purchase Florida – led Randolph to question Jefferson’s dedication to republican principles.  This suspicion was confirmed by actions of congressional leadership in promoting war with Great Britain, appropriating funds for internal improvements, and creating the Bank of the United States.  Randolph remained a republican purist, consigning himself to a party of one – the Tertium Quid.  His politics did not fit the Jeffersonian Republicans or National Republicans.

Is it true that Randolph’s ideas had a great impact on John C. Calhoun, the nullifiers and the later secessionists?

Randolph had little use for Calhoun; he dubbed him a “thrice double ass.”  The two men disagreed over internal improvements, the War of 1812, and the Bank of the United States.  Calhoun began to change, however, as he listened to Randolph speak through the years about liberty and equality. So, yes, Randolph did influence Calhoun’s philosophy.  Randolph’s views on nullification were nuanced. He believed that the states had a right to defy unconstitutional measures, such as Virginia and Kentucky did by resolutions addressing the Alien and Sedition Acts. He did not believe a state could nullify a properly executed measure, such as the tariff rates which set off the Nullification Crisis.  Randolph – along with his fellow Virginians Patrick Henry and George Mason – believed in the right of secession.

3.) Randolph was a master at insulting his colleagues. He called professional American soldiers “mercenary,” “loungers” and “ragamuffins” and compared Senator Henry Clay to the evil character Black George from the book, Tom Jones, which instigated a duel between the Randolph and Clay. Were there different standards for “civility” during the time that Randolph was in Congress compared to our own? Did the potential for a dangerous and possibly deadly duel keep tongues in check?

Frankly, I think the statesmen of Randolph’s era were more civil than ones today.  They were certainly better read, more intelligent, and far more honest.  I would not say Randolph insulted his colleagues – although he occasionally crossed the line of good taste – but rather used all the weapons in the rhetorician’s arsenal:  taunting wit, pungent sarcasm, and debilitating derision.  Randolph’s conduct was best captured by an observer who wrote that his foes were “at least abused in good English.”

Randolph was involved in many duel challenges and negotiations, but took the field only twice.  Randolph’s check on his tongue was the truth. He always believed his attacks were based in fact.

4.) Are there modern day comparisons to John Randolph and the Tertium Quids?

Can the philosophies that Randolph held be compared to any modern day statesman?

The philosophy that Randolph held is supposedly the philosophy that animates the conservative movement; namely, support for limited government, low taxation, individual freedom, states’ rights, and strict constitutional interpretation.  The difference is Randolph really believed these things and attempted to turn principles into policies.  I am hard pressed to think of any modern day politician who truly wants to implement these principles.

Russell Kirk compares Randolph to Edmund Burke and seemed to draw a connection to modern conservatism; do you also believe that is the case?

There are many instances in which Randolph and Burke are philosophically compatible. Burke, like Randolph, was an eloquent defender of ordered liberty, property rights, and tradition. I agree with Kirk that modern conservatism is largely based on ideas propounded by both men.  I differ with Kirk’s assertion that Burke was a significant influence on Randolph. Randolph’s principles were long established by the time he read Burke.

5.) If there is one lesson that modern Americans can learn from Randolph’s life or ideas, what would that lesson be?

I will let Randolph speak for himself:  “There are certain great principles which if they be not held inviolate at all seasons, our liberty is gone.”