The House Committee on Oversight and Government Reform today launched hearings into the culture of waste and abuse at the General Services Administration, which threw a now-legendary million-dollar party for itself in Las Vegas in 2010.  One voice that won’t be heard at these hearings is Jeffrey Neely, the regional commissioner at the heart of the scandal.

Neely, you see, has decided to invoke his Fifth Amendment rights against self-incrimination.  He refused the invitation to testify voluntarily at the hearings, so they slapped him with a subpoena.  Monday’s hearing was actually adjourned early because of Neely’s refusal to testify, as House Oversight Chairman Darrell Issa (R-CA) indicated a side door and asked Neely to “join us” for a private conversation.  The major achievement of Day One was getting GSA deputy commissioner David Foley to apologize for mocking the representatives charged with oversight of his agency.

Mindful that a picture is worth a thousand words, Jake Tapper of ABC News ran some photos from the Google+ page of Neely’s wife, showcasing their fabulous taxpayer-funded Las Vegas suite.  The U.S. taxpayer has been taking a figurative bath, but Neely enjoyed a literal one at his luxurious $600 per night suite in the M Resort: 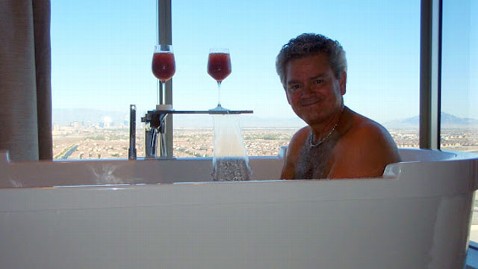 But wait, it gets better.  This isn’t Neely’s suite from the actual Western Regional Conference, with its clown acts, karaoke contests, four-dollar shrimp, and commemorative Obama Stimulus medallions.  No, this is from one of the eight planning trips taken by GSA officials to scout out and organize the big bash.  They spent over a hundred thousand dollars just planning this party.  Tapper sums up the damage:

The pictures show the Neelys enjoying their stay at the hotel, with Neely primping in the bathroom mirror, enjoying the delicious room service wares, and taking in a soak in the “spa tub.” The Inspector General’s report states that “GSA spending on conference planning was excessive,  wasteful, and in some cases impermissible.  To select a venue and plan the conference, GSA employees conducted two ‘scouting trips,’ five off-site planning meetings, and a “dry run.”  Six  of these planning events  took place at the M Resort (the conference venue)  itself.   Travel expenses for conference planning totaled $100,405.37, and catering costs totaled  over $30,000.  GSA spent money on refreshment breaks during the planning meetings, which it had no authority to do, and the cost of catered meals at those meetings exceeded per diem limits.”

In the course of previewing the House Oversight hearings, CNN bizarrely decided to attack Issa, for failing to catch the GSA abuses before the Inspector General did.  “Were you asleep at the switch?” they asked.

Issa might have replied that he’s a bit overstretched these days, since tracking down the Obama Administration’s gun-running adventures in Mexico is a lot of work, but he was considerably more polite:

He also called this an “unusual situation in which we weren’t given a heads-up 11 months ago by the IG,” he said.

“We have 120 people between the majority and minority on this committee. The IG is 12,000 people; by definition we rely on the vast majority of information to come from the inspectors general and from the 3,000 people at the GAO. That’s part of our processes,” said Issa.

He argued that a big problem at the GSA is the way it reports its budgets, which he says makes them murky and hard to decipher.

“For example, there were 10 trips costing $172,000 from that $800,000 that were just people going out and basically having party weekends in the planning process, and if you look into where the excesses were that are not being reported, it’s not just the clown, it’s also the people that had vacation weekends with their family again and again and again in the name of this conference. It is hard to find that in a top line figure. It’s what the IG helped us find,” said Issa.

Issa also revealed that in addition to the now-infamous Obama Stimulus commemorative coins, minted at a cost of $6,300, the GSA Western Regional Conference also published a souvenir book at a cost of $8,000.

Rep. Mike Kelly (R-PA) appeared on CNN Monday morning to discuss the upcoming hearings, and talk about “a culture of spending that just seems to be way out of control.”

Update: Enjoy a little video of Neely taking the Fifth before Rep. Issa’s committee.  He even invoked the Fifth Amendment to avoid identifying himself.