D.C. gun transport laws are not nearly as stringent as city officials tell the public. But the Washington Metropolitan Police Department has refused for two weeks to remove false information about the laws from its forms and website.

gunWhile D.C.’s transport laws turn out to be similar to the standard state law and the federal law, its neighbor Maryland has many more restrictions.

I grew up in Baltimore and all my oldest and closest friends still live there. My girlfriends have grown interested in shooting from watching me go through the process and buying a gun and training with it. Recently I offered to take a couple of them to a shooting range for their first time.

I wasn’t familiar with Maryland’s laws or ranges. Except for one time shooting at On Target in Severn as part of D.C.’s required ownership gun class, I’d so far done all my target practice in Virginia at Sharpshooters in Lorton and the NRA range.

Knowing all the state firearm rules are different, I Googled Maryland’s laws and chose the only link that took me to a government agency. The office that handles guns within the Maryland State Police is oddly called “Firearms Registration”, even though the state does not require guns to be registered. The only places in the country where the government  tracks guns through registration are D.C. and Hawaii.

The website does not have a breakdown of the laws, but rather a link to frequently asked questions. There I found the very narrow question:  “Can I legally transport my regulated firearm to the range?”  The answers was yes, “provided the handgun is unloaded and carried in an enclosed case or an enclosed holster, and you are transporting the handgun to or from the places listed in section 4-203 of the Criminal Law Article of the Annotated Code of Maryland.” 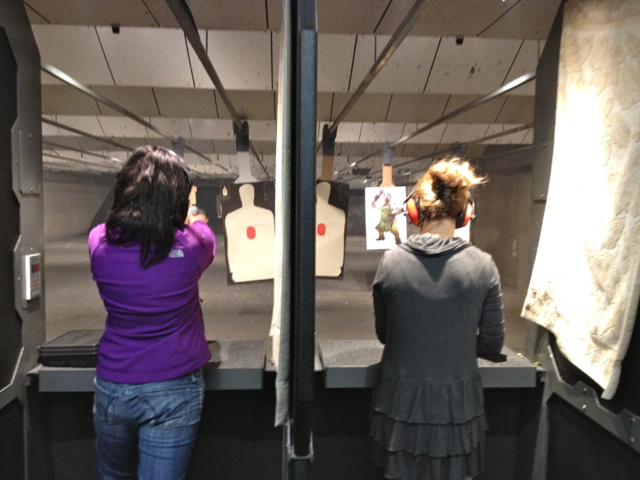 So what are the places listed in the law? Maryland officials don’t make it easy for people to know. I tried to click through every link on the site to find “section 4-203” , but there was no direction for further information.
I called the number for the state police office on the website to make sure I was taking my gun legally in Maryland.

One positive thing about the D.C. firearm registry office — and there is only  one — is that if you call from 9am-5pm on weekdays, someone always answers the phone and gives out information on gun laws and registration procedures. Unfortunately, the information given out is often wrong and the registration procedures are always frustrating. But at least they answer questions by phone, unlike the neighbors in Maryland.

When you call the Maryland state police firearm office, you get put into a voice mail system which very slowly offers seven options. None were related to transport laws, so I chose the one for handguns. I then got eight more options, none were what I needed. I selected one option, only to find out that no matter what number you choose, it’s an automated voice giving information.

I hung up and called back to the main system and listened to all the prompts again. Finally, after a long pause, the automated voice added that, “for all other inquiries or to speak to a command administrator, press seven.” I pushed the button and the phone rang.

Good, no more voice mail, I thought. The phone rang some more. And rang. And rang. No one ever picked up the phone. And there was no option for going back to the main menu.

I figured the only way to know what was in mystery Section 4-203 was to Google. I don’t like using random website to find firearms law because they are not dependable enough to avoid inadvertently committing a crime that carries a heavy penalty. Also, if the police give out the wrong laws, like in Washington, at least if you are arrested for it, your attorney might have a good case.

The criminal law section says that no one can wear, carry or transport a gun in Maryland – concealed or open- in a car or on their person except in certain circumstances. The only time a gun can be taken out of the home is if you are law enforcement, military, police, or have a concealed carry permit.

The only exceptions for the rest of us is if you are going to “a target shoot, formal or informal target practice, sport shooting event, hunting, a Department of Natural Resources-sponsored firearms and hunter safety class, trapping, or a dog obedience training class or show.”

A dog show? I wonder if the ASPCA knows about that exception.

Read the rest of the article at The Washington Times online.