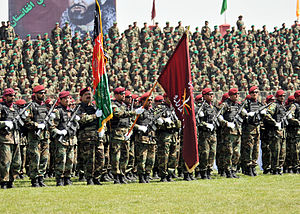 How many American lives is a worn copy of a Quran worth? If a Muslim writes in a Quran and tears out its pages its fine. If an American burns that same Koran it’s a crime punishable by death in Afghanistan.

Is the burning of a book really equivalent to the killing of an American officer? I don’t think so and neither does the officer’s family and friends. Can we assume that President Obama and Secretary Hillary Clinton will phone the American families and apologize to them too? Why not? Aren’t American lives more important than Afghan books?

Isn’t it time we started treating Prime Minister Karzai of Afghanistan like an adult? He should either get his people under control, or the United States should pull all of its troops out of there, now.

You can buy more Korans but you can’t buy more senior military officers.

Why not have Amazon.com send Karzai a box of books and let him keep the extras? Shouldn’t that handle his concerns?

One day at Fort Bragg, North Carolina, while I was attending a Special Forces Operations Officers School, my class was lectured by an elderly, silver-haired Polish military patriot of World War II fame. He was of medium height and stood ramrod erect in the center of the stage instead of hiding behind the podium as most speakers did.

The Polish WWII veteran’s lecture that day was on how to successfully organize for, fight and win guerilla wars.

During the question and answer session one of my classmates asked him, “How do you save a nation that his no history of freedom or self-rule and where the citizens refuse to fight for themselves?”

“You don’t,” he replied. “You let them go on being enslaved. If a people are unwilling to fight to secure freedom and liberty for themselves, you have two options. You can occupy their country and take over their government and armed forces, including exercising promotion authority. And if your nation is willing to make that extreme of an investment for the next 20 to 30 years, perhaps you can bring up a generation of young people who will share your values and be willing to fight for them. I doubt it. The alternative is to write them off as a free nation.”

At the time his comments seemed unduly harsh and cynical, but later I began to appreciate the opinions he had expressed more and more. No matter how badly we want to see all the peoples of the world enjoy the liberty and freedom that our Founders successfully fought for and bequeathed to us, we cannot do for other nations what they are unwilling to do for themselves.

During the Vietnam War some Viet Cong engaged the South Vietnamese regiment I was advising in a running firefight. When we finally cornered them for the kill, they fled into a Buddhist pagoda and hid. I turned to my South Vietnamese counter-part, shrugged my shoulders and said, “You know the rules of engagement, we must observe the sanctity of all South Vietnamese religious buildings. If they don’t come out voluntarily, we are forbidden to go in and get them.”

He nodded his head, called over his operations officer, spoke a few words, and then announced a lunch break. Later, after tea, several soldiers came up to him carrying shoulder fired rocket launchers. He nodded and they commenced blowing a huge hole in the wall of the pagoda. Then they threw in a few hand grenades, killed or captured the Viet Cong who were hiding inside, and we continued on with the mission.

In war, adopting a hearts and minds strategy sometimes makes sense, but it can be just as dangerous and difficult to carry out today as it has been in previous wars. The bottom line should always be that our soldiers should be allowed to use whatever force is necessary to win a fight and to preserve their fellow soldier’s lives.

Without the aid of the U.S. and its NATO Allies, it would have been nearly impossible for Afghanistan to have overthrown the Taliban and introduce their country to the form of democracy they now enjoy.