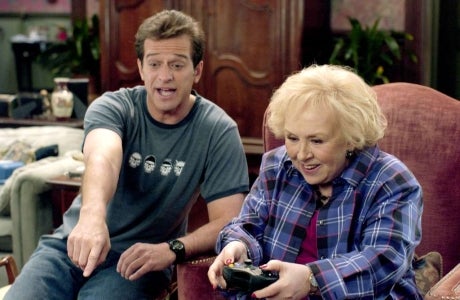 Allen Covert, the star of the laugh-out-loud comedy Grandma’s Boy, is out with a new venture. But this one doesn’t involve a movie about a middle-age “gamer” forced to live with his grandmother because his roommate blew the rent money on Filipino hookers.

Covert’s latest project includes an eBook called Tex the T. Rex, a story about a dinosaur who is born on the Fourth of July and travels the country to understand why America is an exceptional nation.

“I was taught that in this country if you work hard you can do anything, and I don’t see a lot of those principles in children’s books today,” Covert told HUMAN EVENTS. “So we put together stories about hard work and what it takes to get ahead, the American ideals we were all raised with.”

Covert is working in concert with Cherry Tree, a digital media company based out of Hollywood whose goal is to produce “morally instructive children’s entertainment.”

“Unfortunately, many talented people in Hollywood find their values and politics do not reflect the content they create, and many movie themes are in direct contrast with over half of today’s American families,” said Covert. “This is especially reflected in children’s entertainment where no brand currently promotes a strong patriotic, pro-family or American values message.”

Besides Tex the T. Rex, parents can choose to purchase Special Hops, the story about Commander Jack Rabbit who is charged with ensuring that the private property of his fellow farm animals are protected; or Our Town, USA, a story about work ethic and personal responsibility; and The Eagles, an account of a father and mother eagle who “pass down American traditions and family values” to their offspring.

The eBooks are available through the free Cherry Tree App on all Apple smart devices, including the iPad and iPhone. This undertaking by Cherry Tree is part of an emerging field of patriotic books that are targeted to toddlers. Newt Gingrich’s wife, Callista, for instance, recently authored the New York Times bestseller Sweet Land of Liberty, a creative way to tell the history of America using the cartoon character Ellis the Elephant.

Covert understands what the Left has always gotten intuitively, but conservatives are just starting to appreciate: Ideas are passed down through culture, not laws emanating out of Washington, D.C., which is why the long-time actor didn’t hesitate to partner on this children’s project.

“These are fun books,” said Covert. “If you have liberal brothers and sisters with children, please, give them these books,” he added.

Covert acknowledges that he makes a lot of movies that he hopes his three kids will never see, but that he collaborated with Cherry Tree in order to say to his young girls, “you can read all these books and daddy helped produce them.”

For more than two decades, Covert has been a staple part of Adam Sandler’s movies, helping to write, produce, and even star in such cult comedy classics as Happy Gilmore, The Wedding Singer, and The Waterboy, to name a few.

Covert says that most of his movies contain adult humor. “That’s why there’s an ‘R’ on it. Parents can look at it and say it’s not for children.”  The material associated with Cherry Tree is different, however. It’s not only safe for kids, he says, but it is geared directly to them. Covert says that parents rightfully get upset when films are promoted to kids but yet contain language and situations that aren’t appropriate for them.

Covert told HUMAN EVENTS that he first met Adam Sandler at New York University, as the both of them were taking a “History of Comedy” class. “We all moved out to California to try to make it in the business, and we did well,” he said humbly.

As with his movies, Covert is happy to promote the patriotic eBooks to any audience who wants to hear about the literature.

“I don’t feel love of your country isn’t political and shouldn’t be controversial. If the ‘Occupiers’ want me to come speak, I will gladly do so because I know they all have iPads,” he quipped.

We should learn right-to-work lessons from Hoosiers