Remember this episode from 2008? 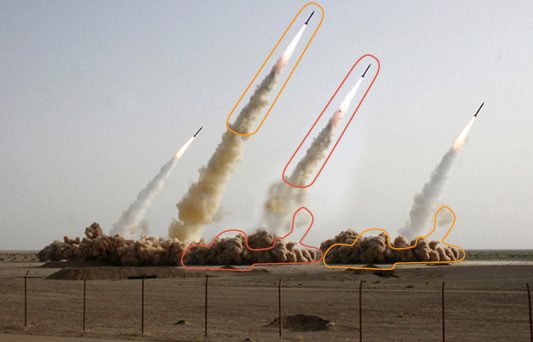 As the above illustration shows, the second missile from the right appears to be the sum of two other missiles in the image. The contours of the billowing smoke match perfectly near the ground, as well in the immediate wake of the missile. Only a small black dot in the reddish area of exhaust seems to differ from the missile to its left, though there are also some slight variations in the color of the smoke and the sky.

Does Iran’s state media use Photoshop? The charge has been leveled before. So far, though, it can’t be said with any certainty whether there is any official Iranian involvement in this instance. Sepah apparently published the three-missile version of the image today without further explanation.

It turned out the missiles weren’t that long range after all.

The Qhader missile, introduced in September, has a range of just 124 miles. The U.S. Navy’s fifth fleet in Bahrain is 150 miles from Iran. Israel is four times farther.

“We’ve seen that they’ve photoshopped, for example, photographs of missile tests before to make it look more impressive than it actually is, so I would take all this with a grain of salt. I think this is mainly posturing. It’s gamesmanship. And it’s again meant to send a message that the Iranians aren’t simply going to sit back while their oil is sanctioned,” said Michael Singh, Washington Institute for Near East Policy.

Undaunted and apparently incapable of being humiliated enough on the world stage, they’re still talking trash.

Iran warned the United States Tuesday not to return a U.S. aircraft carrier “to the Persian Gulf region.”

“The Islamic Republic of Iran will not repeat its warning,” said Maj. Gen. Ataollah Salehi, commander of Iran’s Army, according to the state-run news agency IRNA.

Salehi “said the country will not adopt any irrational move but it is ready to severely react against any threat,” the report added.

Meanwhile, sanctions against the regime may actually be working.

The pressure on the riyal has become the latest economic blow to the country’s economy, which is under several rounds of U.S., United Nations and European Union sanctions because of its controversial nuclear program.

Critics have argued that President Mahmoud Ahmadinejad’s stewardship of the economy has brought few gains.

Unfortunately, the more unstable they are the more reckless they will become, especially if they  want to meddle with American presidential politics.

Gingrich: I Will Not Go Negative, Unlike That Liar Mitt Romney

JWF is a guest blogger for Human Events and the proprietor of Jammie Wearing Fools.