Connect with us
At the same time as I trudge through the Washington, D.C. bureaucracy in my attempt to get a legal handgun for self defense, I need to learn how to safely operate and shoot a gun. 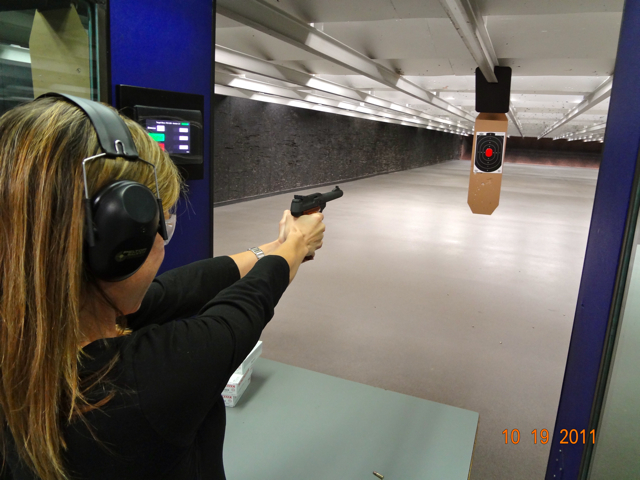 At the same time as I trudge through the Washington, D.C. bureaucracy in my attempt to get a legal handgun for self defense, I need to learn how to safely operate and shoot a gun.

I have no experience with guns. Although my father had a handgun while I was growing up — Baltimore is less safe than D.C. — he hid it from us and never talked about it. I only know that he had it because as a kid, I found a revolver under the driver’s car seat. He told me never to touch it, and that was the end of the discussion.

In contrast, my editor’s father taught the rules of gun safety and took him to a shooting range at 10 years old. So my editor offered to teach me the basic safety rules and skills and then shoot his guns at the range. Since he can’t legally bring his guns to our office in Washington, I went to his house in Virginia for the lesson. It’s remarkable how different the gun laws are once you step over the Potomac River.

He started by handing me a Kahr K40 in 40 caliber by the handle and telling me to “always check to see if the gun is loaded, even if someone tells you it is.” He then showed me how to take out the magazine and then pull back the slide to check if any bullets were in the chamber. I had to pull hard to move the heavy steel slide. “Know what is behind where you are aiming,” he said. I pointed the gun a pile of phone books on the floor.

He scolded me: “Finger off the trigger. Never touch the trigger until you are ready to shoot.” He then handed me a bunch of red bullets, explaining that they were fakes called snap caps, and made me fumble around with the magazine until I could figure out how to correctly fit them into it.

My editor then taught me how to aim by aligning the front and back sights. Then he had me practice pulling the trigger with the fake bullets. Finally, he showed me some variations for stance and grip.  Now, it was time to do this for real. 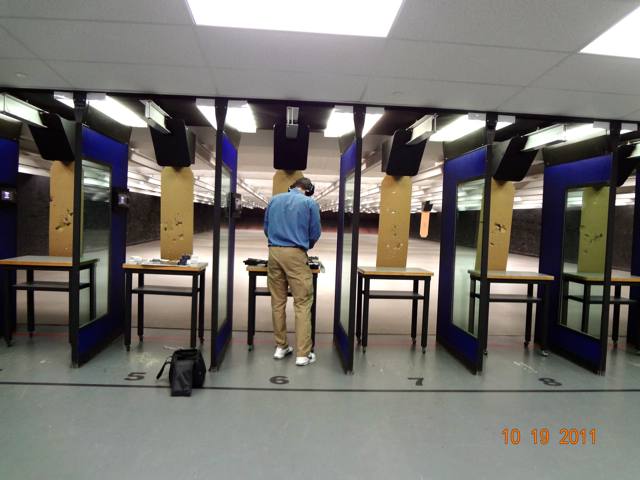 We packed up three guns, boxes of bullets and protective gear and drove to the headquarters of the National Rifle Association (NRA) to use their shooting range. The folks at the NRA have been very supportive of my gun series. We met up with the media staff and went to their state-of-the-art new shooting range which is under a parking garage.

The NRA shooting range is so sleek and modern, you’d expect Jack Bauer on “24” would be in there. Each booth had a touch pad to control the target. The 150-yard range ended on a special slope designed to slow down the bullets and then hold them to be recycled. The climate-controlled air unit took out the gun powder smell.