The NYPD arrested 70 protesters as they moved in on Zuccotti Park early this morning and began clearing out the thousands of Occupy Wall Street protesters who had taken over the space for nearly two months.

More than 1,000 cops marched on the lower Manhattan encampment shortly before 1 a.m. and handed out fliers ordering demonstrators to get out and remove their personal property.

The cops were followed by Sanitation workers, one of whom was overheard saying, “We’re gonna disinfect the hell out of this place.”

The fliers read, “The city has determined that the continued occupation of Zuccotti Park poses an increasing health and fire safety hazard to those camped in the park, the city’s first responders, and to the surrounding community.

“You are required to immediately remove all property, including tents, sleeping bags and tarps.”

That touched off a chaotic scene within the park, as many of the protesters were roused from their slumber and began shouting to others, “Wake up!”

The chaos was continuing this morning, as cops and protesters battled on Pine Street and Broadway at 5 a.m., with police pushing crowds out of the street and on to the sidewalk. Cops charged into the mob after a protester threw an object into a group of police.

At least one police officer was injured; he was seen being taken out of Zuccotti Park on a stretcher, his eyes closed and with several lacerations on his face.

“If they think this is the end of it, they’re crazy,” Steve Iskovitz, 51, a mental health counselor from Pittsburgh, said. “People will strike back.”

Strike back? Why, that doesn’t sound very peaceful.

“They took oaths to protect and serve,” Jason Lee, 36 of Brooklyn, said. “They broke that oath tonight. They destroyed what we built. That’s tyranny by any definition.”

Just in – Labor reps from SEIU have met with OWS leaders. They are asking everyone to meet at Foley Square at 8:15. They will match to 6th Avenue and Canal at 9am. “We will have thousands to join you,” the labor rep said. TW Local 100 will also be joining. 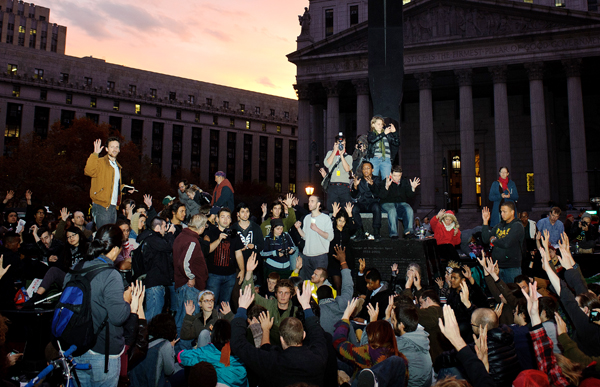