The advance report of GDP growth for the third quarter of 2011 was released by the Bureau of Economic Analysis on Thursday, and forecast 2.5% growth for the third quarter of 2011.  That’s a big improvement over the anemic 1.3% growth in Q2, and the horrible 0.4% in Q1… assuming it doesn’t get revised downward when the BEA releases its final report in a couple of months.

That happens quite a bit, although not all of the time.  GDP growth gets revised upwards sometimes in the final reports.  There have been major revisions conducted many months after the “final” reports were released.  It’s a complicated statistic that relies on huge amounts of data.  It has, however, been a year since the final numbers were better than the advance report.

2.5% GDP growth is not very good.  Our average for the year is only 1.4%, whereas President Obama’s first attempt at a budget predicted it would be more like 5%.  Those are Reagan numbers, as a comparison prepared by economist John Lott shows: 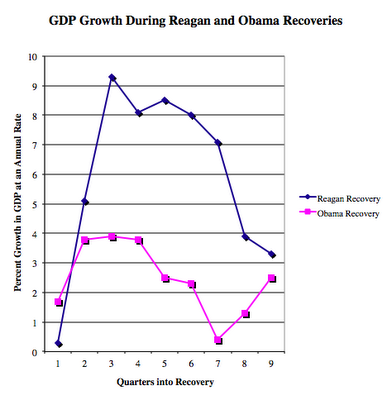 It would take something north of 5% GDP growth to begin repairing the damage to the U.S. job market.  2.5% is not very far head of population growth, so it’s not likely to reduce unemployment.  Bloomberg Businessweek notes that we might not even be able to keep 2.5% growth going for very long:

The biggest drop in incomes in two years, along with declines in home prices and consumer confidence, cast doubt on whether the increase in spending can be sustained. Federal Reserve policy makers, who meet next week, and the Obama administration are considering additional measures to reduce an unemployment rate that has been stuck around 9 percent or higher for 30 months.

“There is some gain in momentum after a very weak first half,” said Robert Dye, chief economist at Comerica Inc. in Dallas, who correctly forecast the rise in GDP. “We need to get the jobs machine going and get the housing market moving in the right direction. The economy remains in a low-to-moderate growth mode, and that keeps us vulnerable.”

One of the problems with using GDP as a method of charting a path to economic recovery is that it counts so many disparate factors, some of which are difficult to assign a precise dollar value to.  Not all of the work product included in GDP is really “productive.”  For example, as John Tamny of RealClearMarkets notes, the labor invested in compliance with government regulations is included in our Gross Domestic Product, as those folks are punching time cards and getting paid:

Banks and investment banks on their own have growing compliance staffs in place to deal with all of the rules foisted on them. Abolishment of what won’t work in the form of Dodd-Frank, not to mention the stabilization of the dollar such that it becomes the proverbial foot would release countless agile minds from facilitator roles, some who will cure cancer, some who will create the next Microsoft, and some who will render the hell that his commercial air travel to the dustbin of history through making private travel as common as cellphones.

But to achieve the above, there would have to be a “recession” that would drive down GDP early on, but boost it in staggering ways long-term. In a nation brimming with talent, too many of our best and brightest are serving as facilitators to the detriment of real economic growth.

Government spending is also part of GDP, which is nonsensical if you’re trying to use it as a measure of private sector growth, and tends to make stagnant statist economies look less anemic than they actually are:

[…] A powerful reduction in government spending would surely bring down GDP substantially. Governments can only create jobs and economic activity to the extent that they take from the private sector, so major spending cuts at first would bring great pain to sectors of the economy in and out of government, but wholly reliant on government largesse.

All of the above is true, but then it’s also true that government spending is almost tautologically about capital destruction, as opposed to wealth creation. If this is doubted, ask yourself if any company in the private sector could ever remain in business if it had lost money for decades, with decades more of losses ahead?

So our goal should be not only to improve GDP, but improve it in the right ways, through measures that reduce the size of the unproductive public sector, which feeds itself by taking rather than earning.  The government is a necessary expense that should be minimized, not an “investment” that returns “wealth.”

We’re in danger of allowing Big Government to metastasize into a tumor that can never be removed, because trimming it would “reduce GDP” and “increase unemployment,” even as its weight inexorably crushes the life out of the national economy.  That might already be a grimly accurate diagnosis of our current condition.  You’ll notice the people who want to increase the size of government never seem to worry about the negative effect their noble tax and spending programs will have on economic growth, or how many jobs they’ll destroy… but the same people will shake the heavens howling about those very issues when it’s time to oppose a dramatic plan to cut government spending.

The need to improve GDP and fuel job creation also makes hash of the “trickle up” theory of economic growth, evident in the Democrats’ contention that benefits like unemployment insurance or refinanced student loans will put money in the hands of the “little people,” who will spend it and create a growth surge.  That never works, even though President Obama has been talking about it for years.  The reason, once again, is the powerful difference between earning and giving.  What people do to earn their wages is, in the grand scheme of things, as important as the money they receive.  Handing out little piles of money and expecting a growth surge is like building a car with half an engine.

A car with half an engine won’t run very far, and neither will phony growth produced with temporary “stimulus” plans.  A health economy creates and fulfills its own demands.  The economy has been falling into a death spiral, in which the government demands a greater percentage of a shrinking pie, and pours much of that appropriated funding into overriding the judgment of the marketplace through bailouts.  It can grow in a spiral too, as entrepreneurs in pursuit of opportunity hire people whose growing demand for goods and services produces more opportunities.

The one thing we can’t do for very long is stand still… which is pretty much what happened in the third quarter of 2011.