Barack Obama made yet another West Coast fundraising blitz this week as he tours the nation campaigning on your dime. Magically, another baby appeared for a touching photo op. It appears his 15-month campaign for re-election will involve moments like this each days. Look at him: He cares about the children. Awww. 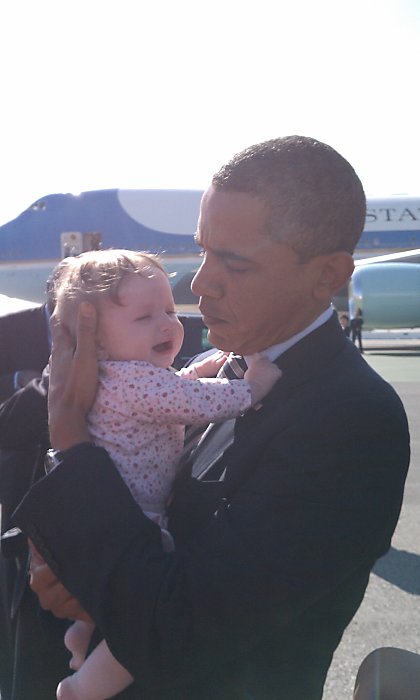 Naturally, a reporter and photgrapher were on hand for this carefully choreographed moment.

President Obama spent only a few hours in San Francisco on Tuesday, but he took just seconds to prove once again why he’s the baby whisperer.

Moments after landing at San Francisco International Airport on Air Force One, Obama greeted San Francisco Mayor Ed Lee before making a beeline to a crowd of well-wishers on the tarmac.

Obama spotted 6-month-old Josie Knight, who was crying while being held by her mother, Gina Odom, 37, of Oakland. Odom, a real estate agent who had received an invitation to meet Obama, had dressed her daughter in her prettiest pink outfit for the occasion.

“It’s OK,” the president said repeatedly, taking the squalling infant into his arms.

The baby didn’t seem to know what was going on and cried for a moment longer before calming.