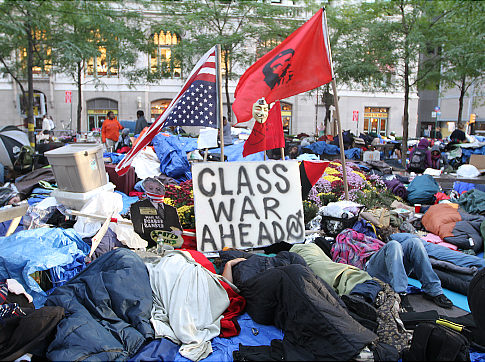 That famous Labor Day diatribe from Jimmy Hoffa keeps making more sense. It’s interesting how the media hasn’t picked up on that in the wake of this staged, Astroturfed, well-funded so-called “Occupy Wall Street” sham. They’ve been basking in endorsements from elitist snobs like Nancy Pelosi, thug clowns like Kanye West, human parade floats in Michael Moore and dictators such as Hugo Chavez. Now we see a common thread behind all this.

This is an exciting time! Thousands of mainly young people have been occupying Wall Street for three weeks already, and the “Occupy Movement” has spread to more than 200 other cities. On Oct. 6 the actions spread to our nation’s capital.

The Communist Party USA (CPUSA) will hold a national teleconference to discuss it:

Arturo Cambron
The Communist Party and the Occupy L.A. Movement

This movement, also known as the “99% movement,” is being hailed across the country. Movements and organizations are reaching out in solidarity. The AFL-CIO is opening union halls and offering other material assistance. Ordinary people are donating food, money and materials.

This alleged 99%, which appears more like 0.99% at best, is quite a clever distraction for Obama’s media sycophants. Rather than cover pesky stories like Fast and Furious or Solyndra, actual scandals that have cost hundreds of Mexicans lives and billions of American dollars, instead we’re treated to daily temper tantrums, mass arrests, threats against other Americans (more here on another convenient distraction) and general chaos. Witness the nonsense that went on in the Hart Senate Building today.

How is it anyone can call these morons 99% of anything? I understand we’ve got 9.1% unemployment due to Obama’s disastrous economic calamity, but that still means the overwhelming majority of Americans have jobs and these people don’t, unless they’re on someone’s payroll.

Then you have scenes like the one in Boston early this morning, where these spoiled brats overstayed their welcome. At least Boston’s mayor had the guts to clear these people out, unlike the pusillanimous pipsqueak that calls himself the Mayor of New York, Michael Bloomberg, who’s bascially telling these whiny twits they can stay as long as they’d like (no coincidence his girlfriend sits on the board of Zuccotti Park’s management company).

So think back to Hoffa imploring his thugs to get out there and wage war. His mobs are now out there howling at the “evil” rich, including at the door of former Obama supporter Jamie Dimon.

That’ll teach Dimon to turn on The One.

It’s all so well coordinated and orchestrated at the highest levels. Just don’t expect the media to point any of this out.

More on Lerner here. The lamestream media would rather you not know who he is.

Americans need to know that ACORN is restructuring in time to help re-elect President Obama in 2012. Obama used to work for ACORN and represented the group in court as its lawyer. These radical leftists who use the brutal, in-your-face, pressure tactics of Saul Alinsky want to destroy America as we know it and will use any means to do it.

Re-electing Obama. By any means necessary. If Obama cared the slightest bit he’d call off his attack dogs.

There’s something in the air, and it’s the stench of a manufactured protest.