The Occupy Wall Street group has a Tumblr account called “We Are the 99 Percent” (a reference to their claim to speak for 99% of Americans, who have been screwed by the evil rich 1%.)  Here they have taken to posting photos of themselves holding up signs to express their grievances.  For example: So, your home is being “over-appraised” (who does the appraising?) so you’re being gouged by taxes (who collects them?) and you can’t sell it because the housing market was first over-inflated, and then violently de-flated, by politicians horsing around with the mortgage industry.  Solution: Occupy Wall Street!  Brilliant! This one’s hard to follow, but I think she’s saying the evil banks shouldn’t expect her to repay her student loans, because her education isn’t worth what she paid for it.  Why is a college education so over-priced?  Didn’t ObamaCare launch a federal takeover of student loans?  Doesn’t compelling others to provide a service for “free” amount to slavery?  Was this person a willing and conscious participant in taking out her student loans?  Never mind all that!  Occupy Wall Street! I wonder if this kid thinks he’s “equal” to George Kaiser in Barack Obama’s eyes. I’ve got to agree with this one.  It shouldn’t be against the law to try finding a job that pays better than the minimum wage!  Somebody ought to conjure some jobs like that out of thin air.  Or maybe the minimum wage ought to be $20 per hour!  And businesses should be forced to provide everything for a lower price!  Then everyone could buy houses, children, and pets!

Those are just the first five images I stumbled across.  Why any of these people think their grievances have more to do with private industry than government is anyone’s guess.  But of course, the very notion of embarrassing yourself by holding up a list of whiny demands for distribution on a web site suggests that an even bigger government, which really cares about its “children,” is the answer they crave.  Personal initiative and economic opportunity are such glib alternatives to trillion-dollar spending programs and coercive government agencies!

Some fun signs from the site of the protests:

Think she’s got a clue how much money was spent on the “War On Poverty?”  Say, to within the nearest hundred billion dollars?

Wonder if he knows what his share of the national debt is – say, to within the nearest ten thousand dollars.

Too big to forbid too big to fail is too big to allow.  Maybe we should just try letting stuff fail instead. 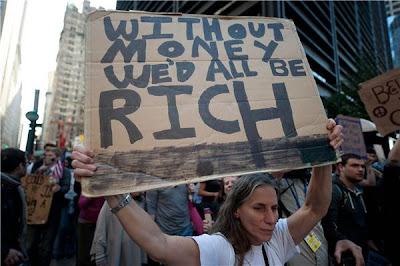 If by “rich” you mean “primitive, impoverished, and easily dominated,” well, yeah.

You’ve just got to love the hilarious defiance of the Chicago Board of Trade’s response to the “We Are the 99%” mob.  They hung a sign in their windows that said “We Are the 1%“: