Coming on the heels of the Washington Post hit piece on Rick Perry, we’re wondering whether the Post and the rest of the Washington press corps will be mentioning Barack Obama’s association with the notorious racists from the New Black Panther Party.

You may remember some of these charming fellows from this video back on Election Day in 2008.

Following that the Obama Justice Department squashed an investigation, leading to the resignation of J. Christian Adams (detailed here), who now has a book coming out this week.

Leading up the the release, Andrew Breitbart today exposed some of the ties between Obama and the New Black Panthers, including the vicious racist Malik Zulu Shabazz.

New photographs obtained exclusively by BigGovernment.com reveal that Barack Obama appeared and marched with members of the New Black Panther Party as he campaigned for president in Selma, Alabama in March 2007.

The photographs, captured from a Flickr photo-sharing account before it was scrubbed, are the latest evidence of the mainstream media’s failure to examine Obama’s extremist ties and radical roots.

In addition, the new images raise questions about the possible motives of the Obama administration in its infamous decision to drop the prosecution of the Panthers for voter intimidation.

Now do you suppose the media will be touting this story far and wide as they have with this Perry non-story? You know, if they’re going to pimp that story, they should at least note Perry was a Democrat back in the 1980s but has since come to his senses. Don’t you think if a Republican presidential candidate appeared and marched with a group of virulent racists it would be front page news?

Of course it would be, but we live with a double standard. Anything portraying Obama in a unfair light is ignored and the motives of those noting it is impugned.

Heck, back in 2008 the NBPP even had their own page at Obama’s own website, as seen here: 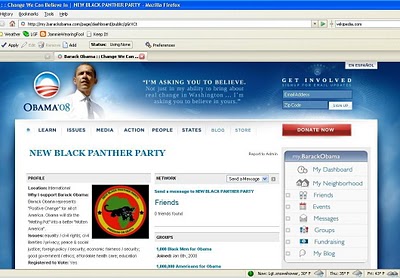 Of course in March 2008 it was pointed out these lowlifes were on Obama’s website and their page quickly went down the memory hole.

Today’s revelations by Brietbart and the forthcoming book by Adams likely won’t be going down any media memory holes.

Iran On Condemned Pastor: No, Wait, He's a Rapist, Not an Apostate