A few months ago, House Minority Leader Nancy Pelosi’s office cooked up a fraudulent chart that purported to show Barack Obama increased the national debt less than any previous President.  It looked like this: 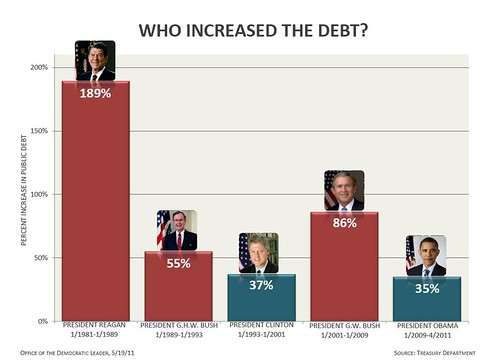 The chart has proved enduringly popular with the “reality-based community,” no matter how often it gets debunked.  It even earned the “Pants On Fire” lie rating from PolitiFact, complete with a lovely animated graphic of a flaming B.S. detector.  The first and most widely-circulated incarnation of the chart even had Obama taking office in the wrong year.

An exasperated Glenn Kessler at the Washington Post repeated his own concise debunking one more time for the logic-impaired:

The chart has some basic conceptual flaws. For instance, as the debt keeps getting higher, the possible percentage increases will keep getting smaller. Under the mixed-up logic of this chart, a person can go from 10 to 20, and that would be a 100 percent increase. If the next person goes from 20 to 30, that’s only a 50 percent increase, even though the numerical increase (10) is the same.

The chart also cherry-picks the data that portray Obama in the best light by claiming to show “public debt” but in actuality using the statistics for gross debt.

Gross debt includes intergovernmental transactions such as bonds held by Social Security and Medicare, but public debt is the more commonly used figure of national indebtedness, at least among economists.

If the chart actually used public debt rather than gross debt, it would have put Obama and George W. Bush virtually in the same league — 60 percent increase (as of September 2011) for Obama versus 70 percent for Bush — even though Bush served as president much longer.

Kessler goes on to note that debt is more properly measured as a percentage of Gross Domestic Product – in other words, measured against our ability to actually repay it.  Under this measurement, Obama delivered by far the largest increase in debt of the five most recent Presidents at +24.6%, while George Bush had the smallest increase at +5.6%, and the GDP surge in the 90s helped Clinton to reduce it by -13.4%.

Kyle Wingfield of the Atlanta Journal-Constitution took the opportunity presented by the revival of Pelosi’s fraudulent chart to ask an impertinent question:

It didn’t take long for the chart to be slapped down again when it resurfaced last week. But its brief revival did make me wonder how such a chart would look if it were drawn to assign responsibility for the debt to speakers of the House. There’s good reason to look at it from a congressional perspective, since Congress must pass budget legislation before the president can sign it. And it’s simpler to look at it from the House perspective, because the balance between Republicans and Democrats in the Senate changed mid-session a few times during the early 2000s.

What would such a chart look like?  Wingfield went ahead and prepared one:

Wingfield even took the extra step of splitting Pelosi’s tenure in January 2009, to factor out the “Great Recession” that just happens to have settled in along with the entirely unrelated ascension of Barack Obama to the Oval Office.  Looking at debt on an annual basis, he discovered that the first half of Pelosi’s speakership still brought the worst debt increases since… the previous Democrat Speaker of the House, Tom Foley.

On the bright side, look which Speaker had the best annualized reduction in debt.  Maybe that guy should think about running for President!