In the course of an interview broadcast Thursday on WESH, the Orlando NBC affiliate, President Obama remarked that the United States had “gotten a little soft” before he came along:

When this video went viral, the President’s shrinking band of hard-core defenders began shrieking that he had been taken “out of context.”  Let us take a look at the “context.”

Here is how USA Today transcribes the “lead-in” to the “soft America” comment:

“Even before the financial crisis hit, one of the reasons that I ran for president was that wages, incomes, had flat-lined at the same time that costs were going up,” Obama said. “I think people felt that opportunities were becoming more constricted for the next generation.”

“There are a lot of things we can do,” Obama then said. “The way I think about it is, this is a great, great country that had gotten a little soft and we didn’t have that same competitive edge that we needed over the last couple of decades. We need to get back on track.”

So the President who has shoved a record-breaking number of people below the poverty line says that before he arrived on the scene, wages and incomes were flat, and the next generation was running out of opportunity.  He “fixed” that problem by implementing policies that resulted in endless double-digit unemployment, and eventually achieved net zero job growth in August 2011.

The current unemployment rate for people aged 16 to 19 years is 25.4%.  For those aged 20 to 24 years, it’s 14.8%.  And those are the cooked statistics – the widely-reported U3 numbers that exclude discouraged job seekers, producing a current general unemployment rate of 9.1%.  That’s a good 7% lower than the true U6 unemployment rate of 16.2%.  The real rate for young people must be approaching 30%.

As for income growth, well, it might have been a bit flat before Obama took office.. but it fell under his wise stewardship.  The New York Times even provided a helpful graph.  See that little kink near the end, where median income suddenly begins to plunge off a cliff?  That’s Obama. 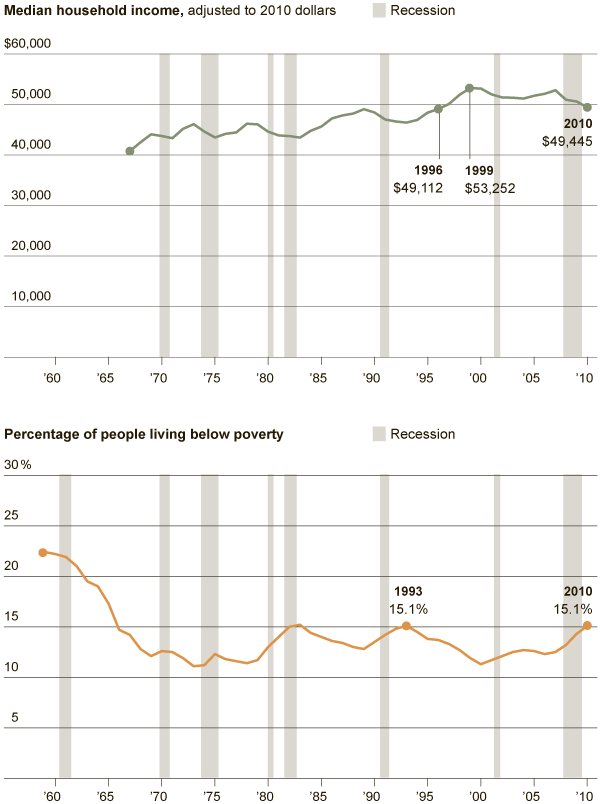 The next generation should be thankful Obama came along to help them!  Oh, and by the way, the President has decided to build some muscle on you plump little Generation Whatever cream puffs by dropping an extra $16,000 of national debt apiece on your shoulders since he took office.

According to the President, America prior to his ascension was also “soft” because of our poor education system and infrastructure, both of which he has already poured insane amounts of money into… but now he says we need even more.  A January 2011 Wall Street Journal article from Stephen Moore notes that education funding rose 116% between 2008 and 2010.

Obama currently spends millions of taxpayer dollars to give photo ops in front of bridges that somehow didn’t get rebuilt during his first trillion-dollar infrastructure-rebuilding “stimulus” plan… and won’t be touched by the new big-spending bill he insists we pass immediately.  Why, you’d almost think his predecessor, the notoriously conservative George W. Bush, hadn’t signed the biggest highway bill in history!  But he did.  It was worth $284 billion.  And yet, we were still left with an infrastructure so soft that Obama constantly demands billions more to firm it up.

Sounds like maybe it’s the federal government and teachers’ unions that have gotten a little “soft.”  When will they be asked to get in shape?

Obama says his national fitness plan involved “investing in basic science and research and technology.”  What he really means is “giving billions of dollars to my cronies in green energy.”  That particular sector has grown so “soft” that its flabby couch potatoes are dropping dead from bankruptcy heart attacks.

How has “investment” in scientific research and development been coming along under Obama?  It’s a complex topic to measure, because there are so many different programs involved.  The Center for Strategic & International Studies studied the matter last year, and found Bush spent more in some ways, Obama in others.  On balance, they concluded: “In comparing Obama and Bush R&D policy, we find that their policies share more similarities than differences.”  (Emphasis mine.)

As for the loss of manufacturing jobs, we’ve lost over 800,000 of them since Obama took office.  2.7 million of them were lost during Bush’s eight years.  That’s roughly the same overall rate of job loss in the manufacturing sector.  There are factors beyond the control of any president involved in this slide, which has stretched across at least half a dozen presidencies.  There are also some factors they can control.  Virtually everything Barack Obama has done since taking office gives companies a good reason to ship jobs overseas, and some of his closed cronies, including G.E.’s Jeffrey Immelt, have done so.

If Obama really thinks this “great, great country” had “gotten a little soft” before he reached the Oval Office, then he must be trying to whip us into shape on the Nietzsche plan: that which does not kill us makes us stronger.  Maybe liberals would be better off letting his inane comments continue percolating through the Internet without the “context” that makes him look even worse.