The centerpiece of President Obama’s new demand for a $1.5 trillion tax hike is the so-called “Buffett Rule,” named after the living person Obama most often cites when promoting tax-and-spend liberalism, billionaire Warren Buffett.  Actually, the rule should be named the “Buffett’s Secretary Rule,” since the president is seriously proposing a tax increase larger than the entire federal budget prior to 1995, on the basis of Buffett’s tax rate supposedly being lower than his secretary’s.

When did American democracy degenerate to the point where massive seizures of property were justified because of individual people?  It’s bad enough that President If-You-Love-Me-Pass-This-Bill has been making a deliberate three-year effort to build a cult of personality, and now gives policy speeches entirely in the voice of a dictator: “I will not allow this, I will insist on that,” etc.  Now Americans are being told they’ll have to suffer a massive tax increase because one guy, who isn’t even an elected politician, took a lot of deductions on his taxes.

As with most other Obama policy initiatives, the Buffett Rule is based on a lie.  The Wall Street Journal demonstrates today that the rich do indeed pay high tax rates:

There’s one small problem: The entire Buffett Rule premise is false, as the nearby table shows. In 2008, the last year for which such data are available, the IRS reports that those who made more than $1 million in adjusted gross income paid an average income tax rate of 23.3%.

That’s slightly lower than the 24.1% rate paid by those making between $500,000 and $1 million, probably because the richest are like Mr. Buffett and earn more from capital gains and dividends. The rate for a relative handful of the rich—400 people—fell to 18%, the modern equivalent of Barr’s Gang of 21. But nearly all millionaires still paid a rate that is more than twice the 8.9% average rate paid by those earning between $50,000 and $100,000, and more than three times the 7.2% average rate paid by those earning less than $50,000. The larger point is that the claim that CEOs are routinely paying lower tax rates than their secretaries is Omaha hokum.

This is the table referred to by the Journal editors: 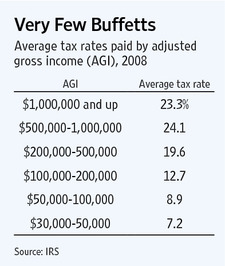 Of course, this obsession with tax rates also ignores the reality of the enormous amounts paid by high income earners.  5%, or even 1%, of Warren Buffett’s income represents far more money than 8.9% of his secretary’s no doubt generous salary.  One of the most important feeding mechanisms for Big Government is the way taxes are always discussed as percentages of income, rather than absolute amounts.  Even the most aggressive Flat Tax and Fair Tax reformers speak of percentages.

Well, an Evil Millionaire who manages to pay a mere 2% of his million-dollar annual income is still forking over $20,000 per year, compared to $4,450 for an average worker with a $50k income paying 8.9%.  Maybe it’s a lot to ask any but the most libertarian government to charge everybody the same amount for government services, and the Left would howl that those who make more are benefiting more from the wondrous government colossus they have constructed, but why don’t we ever get to talk about the actual amount of money seized from peoples’ incomes?

At any rate, alternative minimum taxes, such as the “Buffett Rule” or the current AMT, are a lie.  Only a Big Government liberal could look at such a concept and consider it “fair.”  That’s because liberals only take the government’s view of these matters.  You’re a millionaire and you somehow managed to shelter a lot of your income?  Uncle Sam expected more tribute from you, so he’s going to take it.

Look at the situation from the taxpayer’s point of view.  (Liberals reading this may want to chug some aspirin first, because this will be a painful mental exercise for them.)  Low-income taxpayers have very limited deductions.  The standard deduction many take on 1040EZ forms is enough to largely wipe out their income tax liability – hence the tax rebates that convince so many suckers to celebrate Tax Day, when the government returns the money it borrowed from them during the year, without paying a penny of interest.

Higher income earners face a maze of deductions placed before them by the government, largely for the purpose of controlling their behavior.  Engaging in certain activities the State finds desirable or noble, from taking out a mortgage to making charitable donations, reduces tax liability.

High income earners don’t discover these deductions as a wonderful surprise when they’re filling out their tax returns at the end of the year, the way lower income earners regard their tax rebate check.  Many of these people are filing quarterly returns for small businesses, so nothing comes as a delightful annual surprise.  More to the point, accounting professionals make them aware of personal, and especially business, deductions.  They adjust their personal and professional behavior in order to take advantage of these deductions.  Common sense suggests that the higher their tax rate is, the more effort they invest in minimizing their tax liability.  If tax rates were very low, it might not even make sense to hire expensive accountants to find the deductions, but we are generations removed from a day when that was true.

But when the time comes for these higher income earners to file their taxes – BOOM!  The Alternative Minimum Tax kicks in.  The deductions they were chasing are suddenly taken away from them.  Not only did the AMT victim do nothing “wrong” or illegal when reducing his tax liability – he did exactly what the government wanted him to do.  He responded to an incentive designed to produce certain behavior, but the government snatches away his reward.  The Buffett Rule, which is the AMT on steroids, would only increase the severity of this betrayal.  It’s fraud, pure and simple.  A private business that behaved in this way would be prosecuted.

Now, let me ask a question about Obama’s total package of massive tax increases and huge government spending through his “Stimulus II” bill.  One of the prime features of Stimulus II is a set of targeted tax incentives designed to encourage job growth.  Hire someone who has been unemployed for over six months, or a veteran, and you get a tax credit.

A lot of this hiring is done by small businesses.  Small business profit is frequently counted as personal income, which is why so many small businessmen run into the Alternative Minimum Tax – it had four million victims last year.

Wouldn’t some of the businessmen who tried to collect Obama’s tax credits for hiring the “right” people find themselves running into the Buffett Rule, or the existing AMT… and lose some, or all, of the tax benefits dangled before them by the very same President who postures as an economic genius?

No North Slope Drilling? Are we nuts?