Labor Secretary Hilda Solis: Not My Job to Second-Guess NLRB 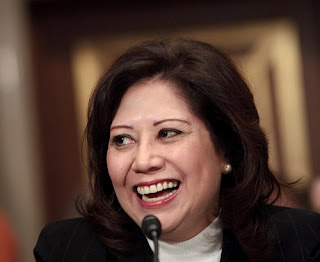 Although she insisted, “I can’t tell the NLRB what to do,” Secretary of Labor Hilda Solis nonetheless addressed some of the controversy that has surrounded the National Labor Relations Board recently.  At a breakfast hosted by the Christian Science Monitor in Washington, D.C., yesterday, Solis specifically addressed recent calls by conservatives for the lone Republican appointee, Brian Hayes, to resign from the NLRB and thus deprive the regulatory panel of the three-member quorum it needs to issue decisions.

“I think the American public is pretty upset right now at the Congress,” Solis, a former five-term House member from California, replied to HUMAN EVENTS, “because of their inability to get together on issues and really focus on jobs.  And I think using those kinds of tactics is not what the public wants to see.

“So I would strongly encourage people to stick to their jobs—do what they know best.” (With the expiration of Chairwoman Wilma Liebman’s term and one seat vacant on the five-member board, the remaining members are Hayes and Obama appointees Mark Pearce and Craig Becker, both of whom have close ties to organized labor.)

Solis was also asked about the NLRB’s lawsuit that seeks to bar The Boeing Company from operating a plant in right-to-work state South Carolina, and other recent rulings, that have been defended by organized labor and harshly criticized by conservatives such as House Education and Workforce Committee Chairman John Kline (R.-Minn.).

“It’s an independent agency, and those appointees that were made are presidential,” she replied, “and are based on the President’s idea and support for these individuals that he thinks will bring a variety of different aspects and information that will help level the playing field in the workplace.  My thought on that is, I can’t tell NLRB what to do.”

She went on, “My opinion is, with respect to collective bargaining, I think people have choices.  My role isn’t to say you’ve got to belong to a union or not.  It’s what people decide, if they make that decision.  So that’s not where I see my role right now.  Mine is to enforce laws, to make sure people have opportunities for good employment, and that they’re safe on the job.  And that people who go to work on a shift can come home after that shift knowing that they’re going to be kept safe there because we have some good laws there, and regulations that help to provide that support.  So that’s basically where I come from.”

Pressed as to whether it was safe to say there had not been an overreach on NLRB’s part, Solis said:  “I think there’s been criticism of just about everything.  So, I mean, things that I do I think help are criticized.

“I think that typically when you see us entering into some tough economic times, you see people having differences and opinions.  But I would say, overall, my role is to focus in on my department.”