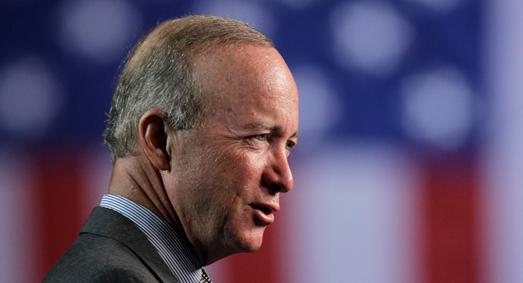 When Mitch Daniels came to office as governor of Indiana in 2005, his state was broke, with a seven-year string of unbalanced budgets and unpaid bills $700 million in excess of its cash.  Within one year, its budget was balanced.  Within three, its debts were paid.  After four years, the state enjoyed a large surplus and was enacting the largest tax cut in state history.


Today, Indiana has an AAA credit rating and a surplus of well over $1 billion to protect a $14 billion budget.  The state has advanced 11 places to the third-lowest in per-capita state spending in the country.  It stood alone in never raising any tax through the recent recession without the benefit of any energy-related revenue.  For six years, state spending has increased at less than half the rate of inflation.

Indiana has the fewest state employees per capita in the U.S., fewer than it had in 1976.  Gov. Daniels won reelection in 2008 with the most votes ever cast for any candidate in the state’s history, and today enjoys one of the highest approval ratings of any governor.  HUMAN EVENTS asked Daniels how aggressive action to downsize government and make it more businesslike was compatible with electoral success.  Here is his very instructive explanation.

Tom Winter is hardly the first person to ask me how we’ve been able to make transformative change in the size and cost of Indiana state government and live to tell about it politically.  Looking back these days, I find myself humming the lyrics to an old standard [from the Broadway classic “Damn Yankees”].

If our Indiana experience tells us anything, it’s that many in our political class overestimate the degree of difficulty in diving into the excess government we have stacked up in America these last few decades.  It could be that they mistake the angry self-interest of the middlemen—the “service providers,” the grantsmen, those who profit from helping government redistribute money—for representing a wider swath of opinion than they really do.  When you scrutinize it closely, many of these interests are making up in decibels what they lack in numbers.

Again and again, we enacted reductions in the face of prefab protests and media hyperventilation, only to find in the aftermath that the general public was at least as interested in economy in government, low taxation and attracting private-sector jobs as in collecting (or seeing others collect) money trickling down through the coarse filter of government.  I say to audiences with confidence these days, “You’d be surprised how much government you’ll never miss.”

“You’ve gotta have hope
Mustn’t sit around and mope
Nothin’s half as bad as it may appear
Wait’ll next year and hope.”

Another clear lesson for would-be cost-cutters is to make every minute count.  It helps if a governor, as most do, has the authority to reduce spending himself, without legislative permission for every cut or reform.  The criticism becomes even more centered on one person, but the trade-off in the ability to move quickly and decisively is well worth it.

We went to work on right-sizing Indiana government literally from the first day.  The sooner you get started, the more time for savings to aggregate and for citizens to see that the sky does not fall when government is reined in.  Hoosiers, even many who said they were alarmed initially at the size of the changes we intended, proved willing to judge us on results, and even to change their minds based on new information.  So I have counseled those of the nation’s great new crop of governors not to hesitate, but to jump right in.  The inevitable noise isn’t half as bad as it may appear.  Act now, and by next year, your hopes will probably be fulfilled.

“When the odds are sayin’ you’ll never win
That’s when the grin should start.”

Too many friends of limited government arrive in public office assuming that their new co-workers are hopelessly part of the problem, not potentially part of the solution.  I encourage assuming the best and giving public employees a chance to be partners in better government.  So smile—the odds aren’t as long as you may think.

We have worked excess out of Indiana government, not just through lower legislated spending levels, but by making tax dollars stretch a part of every state worker’s assignment and reward system.  Just as in any great business, maximum effectiveness happens only when everyone in the enterprise is aligned with its central purpose and working in ways large and small to achieve it.

We give spot bonuses for efficiency innovations and large prizes annually for the individuals or teams who create the most dramatic service improvements or dollar savings.  Indiana state employees are now evaluated once a year, and pay raises awarded on a bell curve in which the best workers receive significant increases and the weakest performers receive none, just one last chance to improve.  After a spectacular success this year in reducing spending an incremental $150 million even below the stretch targets we had set, I declared an “efficiency dividend” of about 10% of that unexpected savings back to the workers who had produced it.

In other words, we are out to reverse the traditional governmental mindset (“use it or lose it,” success is how much money we get to spend next year) and provide real incentives that encourage the new, pro-taxpayer behavior.  And we want our fellow citizens to see that their employees, starting with me, are not out to take unfair advantage of public jobs, but rather to guard and spend the taxpayers’ dollars as though they were their own.

“When your luck is battin’ zero
Get your chin up off the floor
Mister you can be a hero
You can open any door, there’s nothin’ to it but to do it.”

The door to lower-cost government is likely to be more open than an officeholder thinks from reading one-sided media accounts and constituent mail ginned up by middleman interest groups.  Besides, as conservatives understand best, there are worse things than losing an election.  Frequently, when warned that saying no to some demand will entail political risk, I answer, “What are they threatening, to give me my life back?”  Saying “not now” or “not quite so much” or just plain “no” usually involves a degree of risk, but often far less than both friend and foe would have you believe.

So have a heart for taxpayers, and remember: There’s nothin’ to it but to do it!

[This editorial was originally published in the August 29th issue of HUMAN EVENTS newspaper.]

Pension Funds Should Get Real on Rate of Return