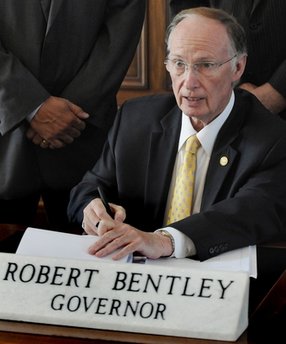 The law, which goes into effect Sept. 1, also penalizes businesses for hiring illegal aliens by revoking their licenses and penalizes anyone who provides housing or transportation to immigrants without proper documentation.

“We have a real problem with illegal immigration in this country,” Alabama Gov. Robert Bentley said after signing the bill into law.

“I campaigned for the toughest immigration laws, and I’m proud of the legislature for working tirelessly to create the strongest immigration bill in the country.”

The Justice Department and the Alabama ACLU are challenging the law in the U.S. District Court for the Northern District of Alabama, charging that it is unconstitutional and impedes on illegal aliens right to free speech and travel.

“Not only is Alabama’s law blatantly unconstitutional, it flies in the face of American values by authorizing racial profiling, deterring children from going to school, and criminalizing those who lend a hand to individuals deemed by the state of Alabama to be illegal,” said Andre Segura, staff attorney with the ACLU Immigrants’ Rights Project.

Opponents of the law say it will “chill children’s access to public schools” by requiring proof of citizenship, and that it interferes with federal authority over immigration.

“This law is wrong.  It takes my dream of becoming a physician or a nurse and throws the dream away,” Jose Perez, 15, a sophomore at Pelham High School, told the wire service.

But signaling how she might rule in the case, Chief Justice Sharon Blackburn said education was not a civil right.

Traveling Back to the Future on Intercity Buses