Conservatives, You Won on the Debt-Limit--Own the Victory Proudly 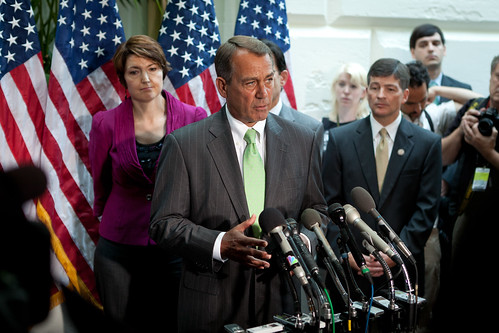 Usually the hardest part is attaining victory.  For some on the Right, it’s declaring it.  Having just won the biggest budget battle in years, you would think they instead had just lost it.

Certainly there is more to be done, but to do it, conservatives need to admit that something very significant was accomplished here … and because of them.

The recently concluded debt-limit debate ended with at least $2.1 trillion in deficit reduction over the next decade.  Yet some conservatives are having a hard time embracing it—even though the alternative could have been a huge shock to the financial system and no deficit reduction at all.  If you doubt, recall the markets’ plunge and then Congress’ reaction to the first failed attempt to pass the Troubled Asset Relief Program (TARP) legislation.

This time conservatives laid a high-stakes wager and won.  Yet some seem upset that they didn’t walk away owning the casino.

What did they not gain that they conceivably could have?

They got enormous deficit reduction out of what is usually a perfunctory vote to pay for past spending.  Exchanging greater future frugality for past profligacy is a good trade.

They also established a mechanism to enforce it.  It will come through either a bipartisan congressional committee or across-the-board spending cuts.  Either way they win:  Deficit reduction gets a bipartisan blessing or mechanical muscle.

And there should be no mistake about the form that deficit reduction will take: spending cuts.  Certainly liberals dispute this, saying spending cuts alone are not expressly designated.  However, why would Republicans, who just won in keeping tax hikes out, now agree to them—especially when the alternative is enforced across-the-board spending cuts?

Keeping tax cuts off this deficit-reduction table is more than just a symbolic conservative victory.  It retains repeal-worthy tax provisions as offsetting payments for fundamental tax reform—conservatives’ next objective.

If there was a symbolic victory, that too was theirs.  They got guaranteed votes in both bodies of Congress on the balanced budget constitutional amendment.  While it will not pass, it will drive moderates to join with conservatives in supporting it—further isolating liberals in the fiscal debate.

If conservatives can’t see all they won, they should at least be able to recognize what liberals lost.

Deficit reduction has reached the same level of importance in Washington that it holds in America.  This is not the debate the administration wanted, any more than it was the outcome they wanted from it.  It was no accident that Obama was immediately before the press after Senate passage—talking about jobs and the economy, not the legislation before him.

Deficit reduction now equals spending cuts.  Liberals were unable to force ending tax cuts into the mix.  Those spending cuts are going to be real.  This is not a short-term deal, but one that will extend through 2021.

Sure laws can be changed, but it will take nothing less to stop these cuts.  And if this exercise proved anything, it’s how hard passing legislation is.  Altering these spending cuts is inconceivable under current circumstances.

Of course, conservatives lamenting the deal will counter.  Didn’t liberals win by getting defense spending to be included in the cuts?  Not necessarily.  The overall spending levels only cap defense spending levels in two of the 10 years.  Yes, defense will absorb half the cuts if across-the-board cuts are needed, but defense accounts for more than half of potentially targeted spending.

Didn’t Obama get his one-time debt-limit increase through 2012?  Not without votes that he had hoped to avoid.  Yes, the votes just disallowed (rather than allowed, as they normally would have) a debt limit that would otherwise have taken place, but they were still votes—attention-focusing events that have again raised the profile of deficits.

Aren’t the Bush tax cuts still set to expire at the end of next year?  Yes, but they were anyway.  That’s hardly a loss, and because they expire at next year’s end, wouldn’t conservatives really rather have that debate in, say … the fall of 2012, right in time for the election?

And between now and next November, conservatives can continue the fight over spending.  The legislation only affects total spending levels—not the division of spending among programs.  That fight begins now.  And anti-spending advocates will hold the high ground in those battles because of this legislation’s looming across-the-board spending cuts if agreement can’t be reached.

Sure, much must still be done.  This isn’t a game of chance, it’s a war of attrition.  The war wasn’t going to be won in just one battle.  But conservatives did just win a pivotal one.  And in so doing, they should see it the way Churchill once put it:  “Now this is not the end.  It is not even the beginning of the end.  But it is perhaps, the end of the beginning.”