Connect with us
The President's had a revelation: America needs more jobs. And he's off on a tour of the Midwest to get feedback on this problem. Add your gems to our list of names for his upcoming bust, er, bus excursion. 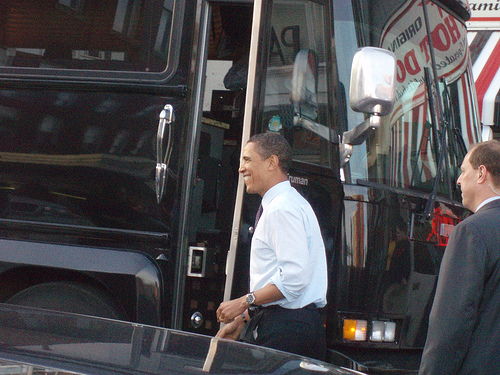 While the country’s wealth evaporates by obscene proportions each day, President Obama has now set his scope on what’s ailing the economy.  No jobs!

“The President looks very much forward to getting out in the country—he’s obviously spent a lot of time here in Washington and in the White House of late—and to hearing from Americans, in the Midwest … about what’s going on in their local economies, what they think Washington can and should do to enhance economic growth, enhance job creation in their parts of the country,” White House Press Secretary Jay Carney told Politico.

Yes, yes — what a revelation.  Nearly three years into his term, Obama is promising to redouble his efforts on getting people back to work.  We’re told that Obama will parachute into the Midwest on a three-day bus tour to “reconnect” with Americans, after we’ve learned, by the way, that more people exited the labor force than there were jobs created in the month of July.

Forget for a moment that even the lefty rag Huffington Post is now deriding the number of times Obama has promised to make job growth his No. 1 priority (more on that).  And never mind that Obama’s call to action to a nation in turmoil is to pour even more borrowed money into infrastructure projects and unemployment insurance, as though his spending blowout the last two years never took place.  What’s really important is the branding of Obama’s bus.  There’s Air Force One and Marine One, so, naturally, the smartest President who has ever graced our shores should go ahead and name the gas-guzzling bus that will bulldoze through key swing states on your dime.

But the thing is that Obama is too busy obsessing over Michelle’s organic farm as well as those money-hungry, greedy oil companies.  Then there’s updating his iPod list with the latest Jay-Z track, and the planning involved for his next booty-shaking bash at Club White House.  And the golf, don’t forget the golf.  A third of his day is gone just with hitting the links alone.

The President doesn’t have time to brainstorm myriad nicknames for his bus.  Not to worry, though, as the Twitter universe came through for their man in the Oval Office, offering him a wide variety of suggestions that are laser-focused and appropriate.

In no particular order, they are:

*Asleep at the Wheel

*The Redistributionist:  You make it, we’ll take it! (Wrecking lives since 2009.)  The license plate reads: UGtScrwd

*WTF Express (not winning the future)

*The Spirit of Chicago

*I Will Throw You Under This Eventually

On and on they could go …

I’m sure you’ve got some good ones to add.  If so, that’s what the comments section is for.  Go ahead, and if it’s really good, I’ll add it to the list above.

While Obama’s still blaming the Standard and Poor’s downgrade, our nation’s ever-expanding credit card and the stagnant economy on the policies of George W. Bush, just remember this:

When Republicans controlled the presidency and both chambers of Congress, unemployment stood at 4.6%, the deficit was a meager $160 billion, the economy was growing by 4% a year, and the Treasury’s coffers were raking in revenues in historic amounts.

Don’t expect the lapdogs in the press to highlight those numbers.  They won’t.  But even they are growing exceedingly impatient with Obama’s abysmal performance.  To wit, Huffington Post—yes, the site run by the Left’s unintelligible dahhhhhling, Arianna Huffington—put together a montage of Team Obama stressing back in 2009 until the present that their focus is that four-letter word (or three letters if you’re Joe Biden) … jobs.

Can you say, déjà vu, Barack:

The Redistributionist.  Ha!  That’s my favorite one thus far.  The sad part is how true that name really is.