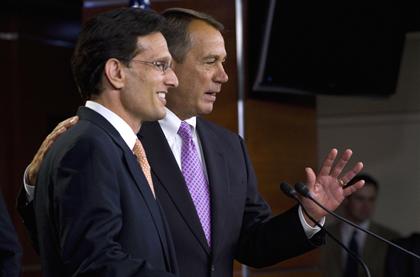 The House on Monday passed a compromise agreement to raise the debt limit $2.4 trillion and usher in stricter spending rules, wrapping up months of negotiations and partisan fighting.

The legislation passed the House by 269 to 161, and is expected to pass the Senate on Tuesday, then quickly be signed into law by President Obama to beat the midnight deadline for the country to default on its mounting $14 trillion of debt.

“If we had been operating under a balanced budget amendment, we wouldn’t have found ourselves in the mess we are in,” said House Speaker John Boehner (R.-Ohio).

Amending the Constitution to require Congress to operate under a balanced budget was one of the sticking points in the negotiations held fast to by Tea Party and many conservative Republicans.  Under the agreed proposal, both the House and Senate are required to vote on such a measure this year—the Senate last week refused to even debate the issue.

Democrats and Republicans were divided over who won and who lost the battle.  Obama didn’t want to revisit the issue before his reelection next year—under the agreement, he won’t have to.  Democrats wanted tax increases, which Republicans fought against.  There are no new taxes in the agreement.

The Budget Control Act also establishes a procedure to initially increase the debt limit by $400 billion and again in two additional steps for up to $2.4 trillion through 2012, according to the Congressional Budget Office.  It creates a Congressional Joint Select Committee on Deficit Reduction to propose further spending cuts, with a stated goal of achieving at least $1.5 trillion in budgetary savings over 10 years.

“Although its’ not perfect, we’re beginning to change the culture in Washington,” said House Majority Leader Eric Cantor (R.-Va.)

Paul Ryan (R.-Wis.), chairman of the House Budget Committee, said the agreement creates a cultural change in how business as usual is conducted in Washington.

Previously, such resolutions to increase the debt limit—which has happened 75 times since 1962, were hidden in budget resolutions and not debated on the floor.

“Now it’s out here in plain sight,” Ryan said.  “That signifies that this is a big step in the right direction.”

“This is a huge cultural change to this institution.  Both parties got us into this mess, both parties are going to have to work together to get us out of this mess,” Ryan said.

Although 95 Democrats voted in favor of the agreement, they argued that Congress should take a more balanced approach by raising taxes to protect entitlement spending.

“I would like to say the bill solves our problem, but it doesn’t.  Nobody on our side of the aisle wants to increase the debt ceiling, it’s not in our DNA,” Hensarling said.

Vice President Joe Biden met with Capitol Hill Democrats prior to the vote to rally them in favor of the deal that Obama struck with Republican leaders over the weekend.

Biden described the Democratic caucus as “frustrated” by the agreement.  “I didn’t go to convince, I went to explain,” Biden told reporters afterward.  “I’d be frustrated if I were sitting there, as well,” Biden said.