[The following was originally published as the editorial in the July 25 issue of Human Events newspaper.] 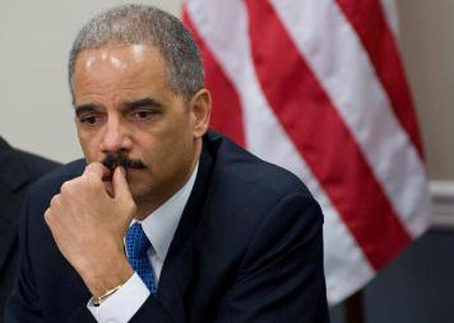 It has been strange to watch the mainstream media ignore the most incredible scandal of the modern era—the “Gunwalker” program used by the Bureau of Alcohol, Tobacco, Firearms and Explosives to pump American guns into Mexico—while lavishing obsessive coverage on the News of the World phone-hacking debacle in England.

Of course, the motivations of the media are not difficult to understand.  There has been absolutely no evidence that News Corp. owner Rupert Murdoch had anything to do with the invasions of privacy carried out by certain employees at one of his many newspapers.  But because he also owns influential conservative American media properties such as the Wall Street Journal, and especially, Fox News, media liberals find themselves looking at a very large domino and praying for it to fall.

Meanwhile, more than 150 Mexicans and at least one U.S. government agent, are dead because of Gunwalker.  The Bureau of Alcohol, Tobacco, Firearms and Explosives (ATF) videotaped the sale of the gun that killed Border Patrol agent and military veteran Brian Terry.  Weapons waltzed into Mexico under its “Operation Fast and Furious” have begun turning up in American cities.  A second program called “Operation Castaway” has been discovered, walking guns into Honduras.  MS-13, the most dangerous gang in the world, has strong ties to Honduras.

Operation Fast and Furious was run out of Phoenix.  Operation Castaway bubbled forth from the Tampa office of the ATF.  Some of the ostensible gunrunning “targets” of these operations turned out to be paid FBI informants.  The programs enjoyed funding from the Obama “stimulus” package.  These factors combine to make regional ATF supervisors, or acting ATF Director Ken Melson, unsuitable as fall guys.

Ken Melson doesn’t want to be a fall guy.  He’s cooperating with congressional investigators, but their requests for information have been stonewalled by Attorney General Eric Holder at every turn.

House Oversight Committee Chairman Darrell Issa (R.-Calif.) and Sen. Chuck Grassley (R.-Iowa) of the Judiciary Committee have sent an increasingly testy series of letters to Holder, most recently demanding he move the Justice Department “from spin mode to disclosure mode” and stop treating the Gunwalker scandal as “merely a public relations problem.”  Nevertheless, Holder continues to pump out billowing clouds of blue smoke, fill committee chambers with fun house mirrors and wipe out 80% of the documents he hands over with the dreaded black marker of redaction.

Everywhere the Obama administration encounters legal controversy Eric Holder can be found, and rarely in a good way.  He’s been criticized by Congress for dragging his feet on terrorism investigations, and became famous for insisting on the lunatic idea of trying top terror masters in civilian courts—a notion even the White House has backed away from.  His big shot at civilian prosecution of a terrorist ended with bomber Ahmed Ghailani’s beating 224 murder counts, only to be convicted for what amounts to aggravated vandalism.

Holder has been hammered by Sen. John Cornyn (R.-Tex.) for doing a “grossly inadequate” job of protecting military voting rights, which just happen to produce a lot of Republican votes.  Like many prominent Democrats, he’s a tax cheat, who somehow forgot to pay property taxes on a $400,000 town house in Queens.

Holder has been instrumental in Obama’s plan to ignore the Defense of Marriage Act.  Attorneys general are supposed to enforce laws, not choose which ones to disregard out of personal distaste.  That’s one of the differences between a republic and a dictatorship.

Strongly worded letters from Congress don’t seem to get Eric Holder’s attention.  Perhaps impeachment proceedings will.  The New York Times emphasized that “Article II of the Constitution gives Congress the power to impeach the President, the vice president, and all civil officers of the United States,” which they stressed would include cabinet members.

The Times declared that “the right of Congress to demand explanations imposes on the President, and on inferior executive officers who speak for him, the obligation to be truthful,” and said that an attorney general who elects to testify “has no right to lie, either by affirmatively misrepresenting facts or by falsely claiming not to remember events.  Lying to Congress is a felony—actually three felonies: perjury, false statements and obstruction of justice.”  The newspaper recommended impeachment as the ultimate remedy, cautioning Congress to “recognize that the issue here goes deeper than the misbehavior of one man.”

Of course, the New York Times said all this with respect to a Republican Attorney General, Alberto Gonzalez, in a May 2007 op-ed titled, “He’s Impeachable, You Know,” by Frank Bowman.  Surely its passionate and principled position hasn’t changed any.  It’s time for Eric Holder to go.

Think it’s time for Holder to go?  Take the survey and let us know!

Boehner to Republican Lawmakers: "GOP Must Protect Country From What President Is Trying to Orchestrate"