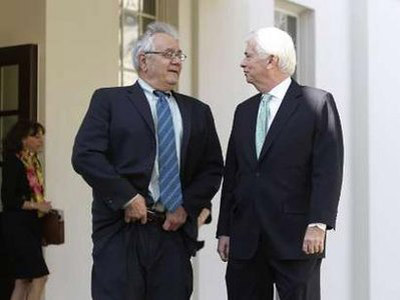 Dodd-Frank, the 2,300-page financial “reform” monstrosity spearheaded by Capitol Hill corruptocrats, turned 1 this week. It made too-big banks bigger. It made too-risky incentives riskier. It made a lousy economy lousier. Billed as a “consumer protection” act, Dodd-Frank has succeeded phenomenally — in protecting and stimulating the business-stifling business of government.

Dodd-Frank is a tyrannical triumph of rule-makers, lobbyists and other non-elected spongers over taxpayers. If you don’t want an unseemly glimpse into the self-serving, sausage-making process that feeds the insatiable Beltway industry, read no further. The law’s implementation process is so far-reaching and Byzantine that every member of Congress should be suffering migraines from it.

Quite expectedly, the feds have met a scant 12 percent of rule-making requirements dictated by the grandstanding Dodd-Frank law as of July 1. According to legal and regulatory watchdogs Davis Polk and Wardwell, regulators missed 131 deadlines over the past year. Moreover, the Securities and Exchange Commission and the U.S. Commodities and Futures Trading Commission have been granting “temporary relief” deferrals (de facto waivers a la Obamacare) left and right to targets in the swaps industry.

Here is just a brief sample of “upcoming activity” on Dodd-Frank (with many rule-making deadlines still to be determined) published on the Securities and Exchange Commission website:

Section 919: Issue rules, as the Commission deems appropriate, designating documents or information that must be provided by a broker or dealer to a retail investor before the purchase of an investment product or service

Section 921: Issue rules, as the Commission deems appropriate, addressing agreements that require customers or clients of any broker, dealer or investment adviser to arbitrate disputes arising under the Federal securities laws

Section 967: Report to Congress describing actions to implement the regulatory and administrative recommendations contained in the independent consultant’s report on the SEC’s organization.

Now multiply that language by more than 400 rules total and tens of thousands of pages, scores of lobbying firms and legions of lawyers.

While disastrous bailout behemoths Fannie Mae and Freddie Mac get off scot-free, small businesses, small community banks and small broker-dealers have been hit hard by the vagueness, uncertainty and cost burdens created by the Dodd-Frank-enstein monster. Meanwhile, the Government Accountability Office estimates that the feds will need $1.25 billion for 11 different agencies to fund the rule-making racket by 2012 — including $481 million for the newly created Consumer Financial Protection Bureau.

Co-father Barney Frank bragged that his freakishly ineffective creation is “holding up well” in public opinion on its first birthday. But that’s because public opinion is shaped by vague, Wall Street-bashing sound bites instead of hard-nosed assessments of the law’s impotence-by-design.

In its analysis of the few rules that have been finalized, law firm Morrison and Foerster LLP — quoted in the financial adviser publication Investment News — concluded that Dodd-Frank regulations “do not address or resolve the core systemic risk issues in the act.” Moreover, “with elections coming up, and with international reform measures dragging along, one cannot help but wonder how, when or even if many of the act’s reforms will be put in place.”

As they say in the software industry, the government budget-lining bureaucratic delays are not bugs. They’re features of yet another Beltway Industry Full-Time Employment Act.

Guess What? The Majority of Americans DO Want A “Balancedâ?ť Approach to the Deficit

Mrs. Malkin is author of Unhinged (Regnery) and "Culture of Corruption: Obama and his Team of Tax Cheats, Crooks & Cronies" (Regnery 2009).