Connect with us
The GOP is willing to compromise, insists the senator, author of "The Freedom Agenda," his timely endorsement of a balanced budget amendment. 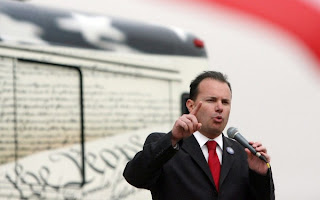 Harry Reid and his party’s decision to block the Cut, Cap and Balance bill from coming to the Senate floor has Utah’s freshman Sen. Mike Lee fuming.

Many Republicans have signaled that they wouldn’t vote to increase the debt ceiling unless there were permanent and structural changes attached to the legislation, including a balanced budget amendment to the Constitution that, as its stated goal, would statutorily control government spending.

“The notion that Republicans are somehow unreasonable and unwilling to compromise is a matter of complete fiction,” continued Lee.  We were ready to have Cut, Cap and Balance debated, discussed, and if the votes were there, amended on the Senate floor.”

Lee’s ire was also reserved for the media who, he argues, have been peddling dishonest narratives about the GOP’s involvement in the debt talks.

“For the media to paint people like me, who want constitutionally limited government, in a negative light and to simply conclude that, because we’re not interested in rolling over and doing whatever our Democrat overseers want us to do, that somehow reflects unwillingness to compromise—that is complete, utter nonsense.  It reflects a reckless, cavalier disregard for the truth.  And it is utterly disingenuous.”

Mike Lee is the author of the newly released book The Freedom Agenda: Why a Balanced Budget Amendment Is Necessary to Restore Constitutional Government, and it couldn’t have come out with better timing.  Whether or not America should adopt a balanced budget amendment hasn’t been polled, debated and discussed with such a level of intensity for more than a decade.

It’s an amendment, mind you, that Harry Reid blasted as bordering on the “worst legislation in the history of this country,” which prompted Lee to call the majority leader’s accusation “appalling” and “beneath the dignity of the United States Senate.”

“I highly doubt he even read it,” Lee told us, adding that Reid’s remarks were “a cowardly response to the one and only solution [Cut, Cap and Balance] that’s been proposed that’s actually gained momentum.”

Democrats have now gone more than 800 days without passing a budget, while unanimously rejecting the President’s budget back in May.  Democrats, including the President, have yet to unveil a comprehensive plan to reduce government spending to its traditional relationship with the nation’s economic output, says Mike Lee.  And if nothing is done, America is in big trouble.

“We’re on a course that will lead us to insolvency in a short period of time, and that’s why I wrote the The Freedom Agenda, to give people hope on how we get out of this mess.”

In the book, Lee chronicles how the Supreme Court in 1937 caved to President Franklin D. Roosevelt (after he threatened to stack the court with new, sympathetic justices), and gave him authority to expand the interpretation of the Commerce Clause in the Constitution, which Roosevelt used to justify his unprecedented expansion of government activism.

The Utah Senator says that while America’s road to fiscal sanity and economic freedom may be a long one, he’s confident that it will in fact be achieved.

“The sooner we do it, the better off we’ll be, the less painful the cuts will be.  But the longer we wait, the cuts that we will have to make—from defense, to entitlements, to federal regulatory programs—will be more abrupt, not because we choose them to be, but because we’ll be forced into it.”

Guess What? The Majority of Americans DO Want A “Balanced??? Approach to the Deficit