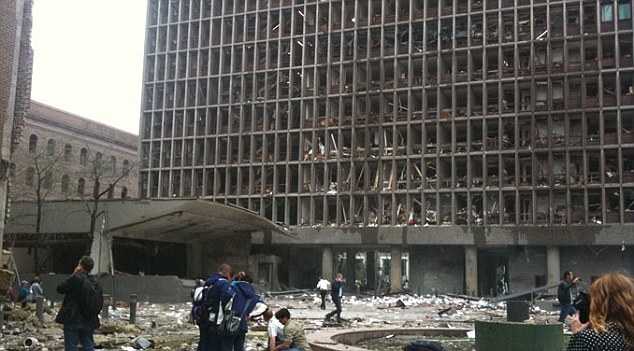 A huge explosion ripped through the government office building containing the Norwegian Prime Minister’s office in Oslo, at around 9:30 AM Eastern time this morning (3:30 PM local time.)  Prime Minister Jens Stollenberg is reportedly safe, but the UK Daily Mail spotted at least two corpses in early photographs of the blast site, and the Norwegian media confirms at least one fatality.

The bomb was powerful enough to blow out every window in the 17-story building, as well as damaging several nearby structures.  Injuries from flying glass have been reported.  Several news sources believe the weapon was a car or truck bomb.  Some speculate that more than one bomb was detonated.

The death toll was lessened because, according to the Daily Mail, today was a public holiday in Norway.  Nevertheless, Bloomberg News reports that police “have told people in the Norwegian capital to stay away from the city centre and limit the use of mobile phones.”  They’re clearly worried about the possibility of further attacks.

No one has claimed responsibility for the bombing yet, but Reuters offers some thoughts on the possible motives:

NATO member Norway has sometimes in the past been threatened by leaders of al Qaeda for its involvement in Afghanistan. It has also taken part the NATO bombing of Libya, where Muammar Gaddafi has threatened to strike back in Europe.

However, political violence is virtually unknown in the country.

David Lea, Western Europe analyst, at Control Risks said: “It’s very difficult to tell what has happened. There certainly aren’t any domestic Norwegian terrorist groups although there have been some al Qaeda-linked arrests from time to time.

“They are in Afghanistan and were involved in Libya, but it’s far too soon to draw any conclusions.”

ABC News says “a senior U.S. diplomat in Oslo said they believe all U.S. personnel in the country are safe and accounted for.”

Update: Norway is under attack.  New reports are coming in that a children’s camp has been hit by a gunman who identified himself as a police officer.  Three gunshot injuries have been confirmed.  No word on fatalities yet.  The Prime Minister described it as a “critical situation.”

At the same time, a similar attack was carried out against a nearby Labour party conference attended by the Prime Minister.  The perpetrator was another gunman disguised as a police officer.

There are unconfirmed reports of more “supicious packages” discovered in Oslo.

Michelle Malkin speculates this might be the execution of a death threat made by Mullah Krekar, founder of the Kurdish group Ansar al-Islam, who had a recent encounter with the Norwegian government.

Update: reports of at least four young people murdered at the summer camp are coming in.  I’ve heard that people were jumping into the water at the island camp to escape from the shooter.

Update: Up to 7 dead from the bomb blast.  The youth camp shooter is in custody, and said to be a blonde Norwegian male, but I’ve also heard reports that al-Qaeda is taking responsibility for the attack.  The Norwegian police are sweeping the youth camp for explosives.

Update: The Right Scoop has an English translation of the alleged claim of responsibility, posted on an Arabic jihadi web site:

Praise be to God Nasser slaves combined and humiliating the people of shirk and kufr companions, prayer and peace upon our Prophet Muhammad, the Seal of the Prophets, his family and companions and after

The Almighty said: (then fight for God but do not cost yourself and rouse the believers may be that Allah keeps those who disbelieve and Allah is more powerful and in punishment) [women: 84]

Today has been targeting Norway to be a lesson and a lesson to the rest of Europe has already threatened us since the invasion of Stockholm more operations has asked European countries to withdraw their armies from the land of Afghanistan and stop its war against Islam and Muslims, and we repeat our warning again to the countries of Europe and tell them carried out the demands of the mujahideen, what you see is only the beginning and the next more.

The reasons for the targeting of Norway there are many of the most important of their participation in the occupation of Afghanistan and the abuse of our Prophet Muhammad (peace be upon him).

Praise God that enabled slaves to the combined .. and pray to God to save our brothers and our fighters everywhere.
Glory and praise God I bear witness that no god but You Astgrk and I repent to you.

Update: A Norwegian news site says that there are more dead in the youth camp, but authorities are worried about entering to recover the bodies, because of possible explosive devices.  Also, the shooter reportedly enticed his victims to “come over here” by posing as a helpful policeman amid the chaos, then “usually just executed them.”