Connect with us
Meanwhile, the Senate's bipartisan "Gang of Six" proposes a modest debt-reduction plan and the Tea Party Nation issues a stern warning to the GOP. 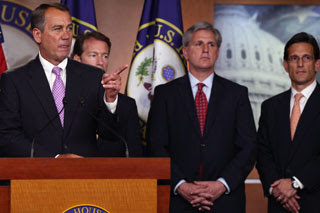 The House on Tuesday passed a Republican-backed measure that requires Congress to pass a Balanced Budget Amendment before raising the debt above the $14.3 trillion ceiling.

The “Cut, Cap and Balance Act” allows the debt limit to increase by another $2.4 trillion matched by equal spending cuts.  It passed mostly along party lines 234 to 190.

“We are spending too much money, I think everyone understands that,” said Jason Chaffetz (R.-Utah), the bill’s sponsor.  “But the question is, are we going to actually do something about it?”

“The future of our nation depends on it.  There is all kind of rhetoric that it will cut Medicare, but that is not true.  It just says we will put ourselves on a glide path to set some fiscal sanity before us,” Chaffetz said.

Debate on the House floor got heated at times over the differences between how Democrats and Republicans want to solve the debt-ceiling issue.

“What we are fighting for are more taxpayers, not more taxes,” added Chaffetz (R. –Utah).  Democrats called the plan “arbitrary,” “radical” and “foolish gimmicks,” making fun of its title and renaming it the “Duck, Dodge and Dismantle” law.

“This is cut, cap and get rid of Medicare,” said Rep. John Larson (D.-Conn.).  “It’s the theater of the absurd.  It seems like a lite beer commercial with endless quibbling on either side.”

Insisting that the legislation was a back-door attempt to cut entitlement programs, Rep. John Lewis (D.-Ga.) called it “a deliberate, systematic attempt to destroy Medicare.”

“It would put our economy back into a deeper recession.  It would mean children going hungry.  We as Americans are better than this.  We are more compassionate than this,” Lewis said.

Republicans countered that the Democrat’s arguments were “out of touch with reality.”

“Only in this room is it a disaster to balance the budget,” said James Lankford (R.-Okla.).  “I don’t think Americans understand how out of touch we have become.”

“I’ll tell you what is absurd, saying they have a plan, when they have no plan at all.  That’s the theater of the absurd,” said Rep. Tom Price (R.-Ga.).  “The only thing Cut, Cap and Balance is bad for is members of Congress” who must cut spending.

Rep. Ron Paul (R.-Tex.) said both parties are to blame for the massive deficit.

“The reason we don’t cut spending, is one side loves entitlements, and the other side loves war,” Paul said.

The House action came as the a bipartisan group of senators known as the “Gang of Six” released a new plan that would cut $3.7 trillion from the budget over 10 years, but would also add $1.2 trillion in new revenues.

The agreement was brokered between Democratic Senators Kent Conrad of North Dakota, Mark Warner of Virginia and Richard Durbin of Illinois, and Republican Senators Mike Crapo of Idaho, Saxby Chambliss of Georgia and Tom Coburn of Oklahoma.

The Senate plan says the debt must be “stabilized” by 2014 and “impose unprecedented budget enforcement.”

President Barack Obama has threatened to veto the House plan but called the latest Senate proposal a “very significant step.  Obama also maintains that a separate proposal put forth by Senate Minority Leader Mitch McConnell (R.-Ky.) is also a “fail-safe” plan of action to settle the debt limit before the Aug. 2 deadline and the first family leaves for its summer vacation in Martha’s Vineyard.

McConnell also supports the Cut, Cap and Balance Act, and said during a Senate floor speech Monday that a government borrowing 42 cents for every dollar it spends “needs to sober up.”

“Two years of reckless spending and debt have brought us to the point of crisis.  And this week, Americans will see how their elected representatives decide to resolve it,” McConnell said.

Judson Phillips, founder of the Tea Party Nation, warned that his followers will retaliate against Republicans who give Obama the authority to borrow more money without budget cuts, specifically targeting Obama’s health care plan and Planned Parenthood.

“Voting for the Cut, Cap and Balance plan won’t save you from the Tea Party’s wrath if you ultimately vote for a cheap giveaway of more debt to Obama, as McConnell and Boehner are planning,” Phillips said.

Kids and Firearms: A Few Thoughts

Can Michele Bachmann Withstand the Attacks?