Connect with us
The Senate minority leader drops the ball in his feeble attempt at punting the budget deal to Obama by assuring the administration it will score a debt-ceiling hike. 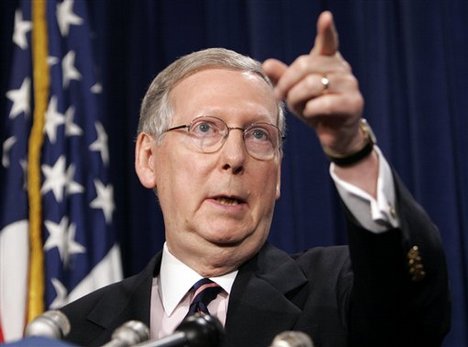 Give Senate Minority Leader Mitch McConnell credit for trying to break the impasse over a debt deal. But don’t give him anything more than that. The plan, which enables President Obama to raise the debt ceiling without Republican support, is too cute by half. The objective is to shift the debt onus onto the president: As he submits requests for expanded borrowing, he must also include spending plans, which Congress can support or oppose in symbolic referendums. While McConnell insists the deal is voided should Obama demand tax hikes, the strategy still suffers three major flaws.

First, McConnell is punting congressional Republicans’ constitutional budget responsibilities in hopes of scoring political points against the White House.  Like football, points in politics are most effectively scored on offense.  Republicans seem to think if they can just avoid being blamed for higher taxes, all else is kosher and they’ll survive 2012.  This is an unusually defensive posture following historic electoral victories in 2010 and today’s unprecedented sense of national urgency for wholesale reductions in the size of government.

With opposition to raising the debt ceiling running 2 to 1 (per Gallup and CBS), coupled with growing revulsion at America’s atrophying government, Republicans started this debate with excellent field position.  Yet for reasons known to no one I know, Republican leaders assured from the get-go that despite whatever bluster may follow, ultimately they’ll embrace their inner coward and cave, permitting the national debt to inflate further.

When Fox News’ Bret Baier pressed McConnell on what might happen if Republicans’ opposition to tax hikes sparked a stalemate with Democrats, the Senate minority leader—nurturing his noxious Nervous Nellie nature—shook like a leaf until any pretense of principle quickly fell away:

MCCONNELL:  “Well, we’re going to go forward, and I’ll have more to say about that later in the week.”

BAIER:  “Is there a contingency plan?”

MCCONNELL:  “There is always a contingency plan.”

BAIER:  “I mean for people out there, do you believe the economy is in serious jeopardy if the debt ceiling isn’t raised?”

MCCONNELL:  “Nobody is talking about not raising the debt ceiling.  I haven’t heard that discussed by anybody.”

MCCONNELL:  “Not in Congress.  Yeah, nobody’s talking about not doing that.”

Which is a shame.

Second, by talking tough on tax hikes but wilting whenever spending limits near, Republicans forgo whatever leverage they hope to extract by posing as principled defenders of rational budgeting.  Fighting over the debt ceiling began in earnest once the government nearly shut down in early April.  Since then, administration officials effectively admitted to running history’s biggest Ponzi scheme.  The U.S. government currently borrows in excess of $1.3 trillion every year simply to cover its operational costs.

Rating agencies don’t seem to have noticed, but administration officials are insisting that in the event Washington’s well of borrowed money runs dry, legally entitled creditors will be the last ones in line to receive checks.  Unlike servicing interest, the government bears no legal obligation to continue its other planned spending—like, say, “nonessential” employees, or California’s $42 billion slow-rolling train-to-poverty, or counterproductive agencies such as the Departments of Agriculture, Energy, Education, and pretty much all of the others.  Instead, the Obama administration makes it plain that such spending is inviolable, but that it’s perfectly happy to default on its interest payments.  If any standard-issue Wall Street brokerage firm were to inform its investors that they would only be paid what they’re duly entitled to if it’s able to attract more “investors,” Bernie Madoff would not long suffer the pangs of solitude.

The facts are clear:  America’s morbidly obese government accumulates debt at a clip that could soon collapse the country.  The window for mounting a rescue operation shuts slightly every day.  Which is why McConnell, in forfeiting his debt-ceiling leverage merely to win a short-term fight over taxes, misses the forest for some polls.

Third, the senator’s proposed debt deal’s gravest flaw is its implicit acceptance that the cap on borrowing will inevitably be lifted.  If Republicans care about America’s fiscal mismanagement, the debt ceiling is actually the perfect tool for restoring order.  In 2011, debt servicing is expected to run approximately $300 billion.  Assuming the Treasury has paid a little more than half of that by August, Congress is left to locate $150 billion from its existing resources—a mere 5% of a $3.5 trillion budget.  Consider the situation from a real-life perspective:  If an average person of average intelligence is spending 5% of his or her total household budget on a mortgage and realizes the money’s running out, that person—endowed with the invaluable gift of common sense—would cut back on other expenses to ensure his or her home isn’t foreclosed upon.  Faced with similar circumstances, Treasury Secretary Timothy Geithner—whom the Lord chose not to bless with such common sense—would instead tell his mortgage provider that he’s good for the money.  He’s just waiting on MasterCard to issue him his 79th credit card.

Trimming $150 billion from a $3.5 trillion budget (comprised of 65% fat, give or take half a percentage point) is hardly the steepest challenge in America’s short history.  Yet it’s a struggle Republicans can hardly bear to even think of undertaking.

America’s debt crisis has never mattered to President Obama.  In the vainglorious tradition of his former chief of staff, Rahm Emanuel, Obama seeks to exploit the emergency to jack up taxes and redistribute income.  If he sincerely believed the apocalyptic warnings that his hired team of economic all-stars issues each day, he’d have already begun acting.  Every day he could be doing something.  Selling federal land, freezing wages, halting proposed programs not yet initiated, maybe even laying someone off—anything to push this supposed day of biblical calamity further into the future.  Instead he’s intentionally brought things to the brink, looking to apply pressure on Republicans (whom he no doubt views the way Vladimir Putin does Obama—as weak and pointless) for higher taxes.  Anything, really, to advance his obsession with amassing power via more taxpayers’ cash.

Yet even as Republicans remain stalwart on tax rates, surrendering on the debt ceiling will only undermine their victory.  By clearing the way for more borrowing, spending, and higher guaranteed interest payments, the GOP only ensures future tax-rate fights.  McConnell started his day declaring no deal would be possible so long as Obama is President.  He ought to have quit while he was ahead.

Recipe of the Day: Linguini McConnell Over Weaksauce

Tom Elliott is the executive producer of The Peter Schiff Show. He formerly produced Laura Ingraham???s radio show and wrote editorials for The New York Post and New York Sun. Follow him on Twitter @tomselliott.