Connect with us
The long-term consequences of Obama's inept and conciliatory policy toward the Persian rogue state could turn the Arab Spring into a worldwide winter of disaster. 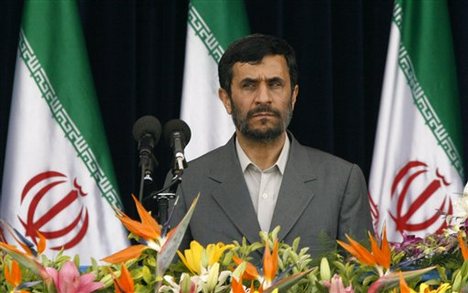 President Barack Obama’s wrongheaded Iran strategy virtually guarantees long-term damaging economic, geopolitical and security consequences for America, the Middle East and the world.  He needs to wake up to the fact Iran is at war with America and we are losing—badly.

Consider four areas where Iran is winning and why Obama’s misguided strategy—sanctions, talk, and “hope” for a revolution inside Iran—is losing the war, the likely consequences, and what we ought to do.

First, Iran is rapidly expanding its influence across the Middle East by force, intimidation and persuasion.  Former Secretary of Defense Robert Gates told Bloomberg.com that Iran “didn’t create the Arab Spring [the populist revolts against authoritarian rule sweeping the region] or start it, but they are clearly trying to exploit it wherever they can,” even in Iraq and Afghanistan.

This spring, Tehran increased its deadly aid to our enemies in both Iraq and Afghanistan to hurry our anticipated withdrawal.  “Iran is very directly supporting extremist Shiite groups, which are killing our troops,” said Adm. Mike Mullen, chairman of the Joint Chiefs of Staff.  “There is no question they are shipping high-tech weapons in there,” the chairman said, “and the forensics proves that.”

Last week The Wall Street Journal reported that Iran’s Islamic Revolutionary Guard Corps (IRGC) ships arms to our enemy in Afghanistan too.  For example, in February, the British forces in Afghanistan intercepted a shipment of sophisticated rockets near the Iranian border.  The Iranian-made rockets have an estimated range of about 13 miles, double the capability of most others in the Taliban’s arsenal.

The Arab Spring is better known for uprisings in countries such as Bahrain.  Iran sent its terrorist proxy Hezbollah to help Bahraini Shia organize an uprising to topple that Sunni-dominated government.  But Saudi Arabia intervened with 1,000 troops to help quell the unrest.  Last week, Iran’s foreign ministry spokesman Ramin Mehmanparsat demanded Saudi Arabia withdraw its forces from Bahrain and “prepare the ground for regional cooperation.”  Surprisingly the Saudis withdrew some troops, likely because they know we are leaving the region and they must work with the hegemonic Persians.

Iranian officials are also “attempting to influence the political process in Egypt through efforts to connect with the Muslim Brotherhood,” testified Israel’s military intelligence chief, Maj. Gen. Aviv Kochavi, before a Knesset committee, according to the Jerusalem Post.  Kochavi said the Brotherhood, a radical Islamic group, is pressing for elections to take place as soon as possible, because it is “the only group that’s ready for elections.”

A victory for the Muslim Brotherhood would be a blow to Israel (likely the peace treaty with Egypt would be abandoned), and the U.S. and Arab nations such as Saudi Arabia and Jordan fear Egypt will emerge as a radical Islamist state like Iran.

Second, Iran is expanding its violence to our doorstep—Latin America.  Last week, hearings in both the U.S. Senate and House of Representatives sounded alarms that Tehran is making significant inroads throughout Latin America .

Air Force Gen. Douglas Fraser, head of the U.S. Southern Command, told a Senate committee that Iran has aggressively expanded its network of embassies in the region and built numerous cultural centers and mosques in more than 15 countries.

Fraser testified that the Iranian-built mosques and cultural centers are teaching a radical brand of Islam and serve as recruiting centers for “extremist organizations” such as Hezbollah.

Iranian terrorist networks such as Hezbollah are growing at an alarming rate in Latin America, testified Ambassador Roger Noriega before the House Committee on Homeland Security.  “These networks cooperate to carry out fund-raising, money-laundering schemes, narcotics smuggling, proselytization, recruitment and training,” said Noriega, a fellow with the Washington, D.C.-based American Enterprise Institute.

Tehran’s Latin American activities also include basing ballistic missiles.  The German magazine Die Welt reported earlier this year that Tehran plans to base long-range Shahab-3 missiles in Venezuela that are capable of reaching the United States.  The basing agreement gives Venezuelan President Hugo Chavez permission to use the missiles in case of an “emergency” for “national needs.”

Last week, Israel’s Gen. Kochavi told his government that Iran will be able to produce a nuclear explosive within two years.  Israeli and American intelligence communities have guessed wrong before about Iran’s bomb-making time line, but this time there is more credible evidence.

A second report dated May 24 from the United Nations’ International Atomic Energy Agency (IAEA) states that its own inquiries show “the possible existence in Iran of past or current undisclosed nuclear-related activities,” such as “producing uranium metal … into components relevant to a nuclear device” and “missile reentry vehicle redesign activities for a new payload assessed as being nuclear in nature.”

Iran is evidently making good progress with its missile program as well.  At the end of June, British Foreign Minister William Hague told the House of Commons in London that Iran tested “missiles capable of delivering a nuclear payload.”  British intelligence indicated Tehran has tested the missile three times since October, according to the Jerusalem Post.

Finally, Iran continues evading international sanctions to support its expanding missile and nuclear weapons programs, but it also proliferates those technologies and conventional weapons to many undesirables.

Iran provides sophisticated weapons to Shiite militia in Iraq, the Taliban in Afghanistan, long-range rockets to its proxy Hezbollah in Lebanon, and boatloads of arms to the terror group Hamas in the Gaza Strip.

Tehran also collaborates with North Korea on both missile and nuclear technologies, according to the IAEA’s report.  Iranians visit North Korea, and according to a May 16 report by the Japanese newspaper Mainichi Shimbun, 200 North Koreans were sent to Iran to transfer military technology for developing Iran’s nuclear and missile programs.

The Arab Spring appears to have created another proliferation opportunity.  Last week, Saeed Jalili, the secretary general of Iran’s Supreme National Security Council, told Al-Ahram, an Egyptian newspaper, that his country is fully prepared to engage in “scientific and technical cooperation” with Egypt in the production of nuclear energy.  Iran previously “cooperated” with Syria to build a secret reactor, which was destroyed by Israeli jet fighters in September 2007.

The consequences of Obama’s inept Iran policy are becoming fearfully evident.  Middle East countries see America withdrawing, so they kowtow to Tehran’s demands, and countries in Latin America are aligning with the Persian rogue against the U.S.  Tehran’s atomic weapon-seeking activities have already earned Saudi Arabia’s promise to join the nuclear arms race if Iran doesn’t soon change course, which is unlikely.  And Iran is making the world a more dangerous place through its nonstop arms sales.

Obama needs a strategy with teeth, such as promising to keep a credible combat force in the Persian Gulf after our Iraq withdrawal to counter Iran and accelerate security cooperation to help troubled Arab Spring partners.  The U.S. must promise to destroy any Iranian missiles bound for Venezuela and pursue Iran’s terror proxies throughout Latin America.  We must destroy Tehran’s atomic weapons program now and crush every Iranian proliferation action.

We are losing the war with Iran because President Obama’s strategy is toothless and the long-term economic, geopolitical and security consequences are unacceptable.  Only a hard-hitting, robust policy of aggressive containment and military action can work.

Robert Maginnis is a retired Army lieutenant colonel, and a national security and foreign affairs analyst for radio and television.