Hollywood and Slime: Sleaze Sells, and How!

“Does Tabloid Culture Go Too Far?” asks a headline on CNN.  Probably, but here’s the deal:  Tabloid “journalism” wouldn’t exist if a lot of people weren’t reading these publications.  The demand for celebrity news and gossip is significant and growing, bleeding as the cult of personality into mainstream news outlets that must report this “news” to compete.  Gossip, mind you, sells—not only in Britain but at home here in the U.S., where the reporting tactics are not that different.  If you don’t like this sad fact, you have the power to make it go away.  Turn off the Casey Anthony trial, walk away from the stories on Mel Gibson’s baby mama.  If a good old “I Married a Bigfoot” headline bugs you, buy some gum at the checkout line, not a rag.  If you can’t ignore it, shut up with the sanctimony.  The truth is, people LOVE this coverage, done well, or not.  The sad part:  Most people can’t tell the difference. Voyeur Nation—that’s us. Own your crap, America.

Speaking of Casey Anthony, now that victim crusader Nancy Grace likely is institutionalized or heavily medicated after that whammy verdict, what kind of security detail do you suppose “tot mom” will have when she’s freed from the pokey next week?  A big one, brokered by her attorneys, who want her protected so she—and they—can make a buttload of money in book, film and TV appearance deals.  Jose Baez, like him or not, is a newly minted legal star.  Watch for him on cable networks soon.  Or as a high-profile celeb defense counsel.  He’ll probably open a Los Angeles office soon.  Interesting that Casey went from school marm during the trial and verdict day to big-haired vixen for her sentencing.  We are not surprised.  It’s a great coif for a strip club.

We saw Mitt Romney up close and personal a few weeks back, and the first thing we noticed:  At 64, he is whip thin and looks GREAT.  Movie star sleek.  What’s the Mittens workout?  We’d love to know how he manages to keep it fit, especially as he campaigns.  Road life—ask a touring musician about this—can be tough on the bod.  He must be disciplined at exercise and eating.  Or have a dynamite trainer and personal chef. 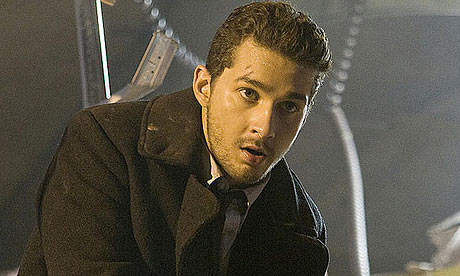 Shia LaBeouf:  Didn’t your momma or someone at Hollywood charm school tell you that kissin’ and tellin’ is still wrong?  Keep that “I hooked up with my co-star” crap to yourself, dude.  It doesn’t make you a swordsman, it makes you a creep.  Also:  Don’t bite the hand that feeds.  You’re too young and not successful enough to be talkin’ that kind of smack against your films—snoozers or not.

You could say a lot of crap about those Kardashians—and we will—but one thing we love is that they have a fierce family.  We wouldn’t want to tangle with Mama Bear Kris.  She’s a VIKING!

Best Celeb Tweeter:  Hugh Hefner.  He fielded a lot of civilian questions about his runaway bride with aplomb.  His new girl, she ain’t ugly.  Ah, heartbreak in the grotto.  We love it that he enjoys playing board games and cards.  So cute.

Prince William and new bride Kate are the best ambassadors for the wilting royals.  They seem smart and modern and decent as they grab attention on their North America tour.  Their engagement in the world is pitch perfect.  (Much like Kate’s travel wardrobe—not that any of us are monitoring it.)