Connect with us
MSNBC's plunge to the far left goes unreported by a media too busy punching Fox News. 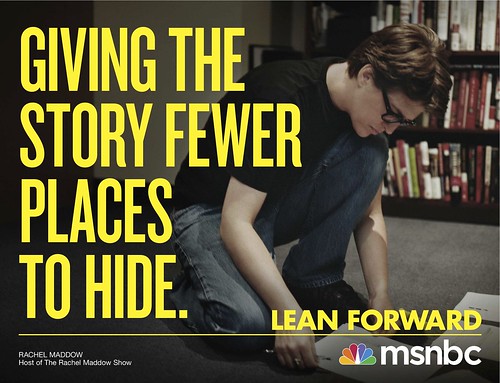 MSNBC began simply as a bland, Internet-gimmicky version of NBC News on cable TV, but in the last decade it has shuffled more and more to the radical left. As it picked up a stable filled with ultraliberal talk-radio hosts, and even hired substitute anchors from the far-left Nation magazine, the network now boldly associates itself with leftists and President Obama with a new, revolutionary slogan: “Lean Forward.”

The “Lean Forward” ads now all over TV were directed by black leftist Spike Lee—the one who created a strange HBO conspiracy documentary to explore how George W. Bush allegedly dynamited the levees to flood New Orleans after Hurricane Katrina. The Nation ads are everywhere, not only in heavy rotation on MSNBC, but popping up on liberal sites from NPR to The Atlantic to The Huffington Post. This summer, they’re is taking the ads to upscale movie houses.

The first explanation of this “branding” campaign tried to be less ideological: “To lean forward is to think bigger, listen closer, fight smarter and act faster. To celebrate the best ideas, no matter where they come from.” Chief marketing officer Sharon Otterman explained, “It stands for progress and advancing the issues our viewers are interested in.”

But anyone who has seen the ads knows they are audacious expositions of liberal beliefs and bugaboos. MSNBC’s viewers are the people who think Barack Obama is an over-compromising centrist, so “advancing their issues” closely matches the agenda of those guest hosts from the Nation magazine.

Even comedians have mocked the campaign. Seth Meyers of NBC’s “Saturday Night Live” came to the White House Correspondents Dinner and joked, “‘Lean Forward’—as if the problem has been that we couldn’t hear them. Have you seen ‘Hardball’? Chris Matthews yells like an auctioneer in a wind tunnel.”

Matthews is the dean of MSNBC pundits, even if his ratings run behind those of the network’s prime-time shows, and his promo takes the thrill up his leg he gets from Obama talking about America and denounces all Republicans. From the roof of the Hay-Adams Hotel overlooking the White House, Matthews demands his opponents say, “I disagree with Obama on taxes, on the size of government and some foreign policy issues, but he’s as much an American as I am. And you know what the problem of this 2012 election is? They won’t say that.

Is that a DNC ad or an MSNBC ad? Who can tell? The ad’s still running – even though Jon Huntsman refuted it (or replied to it) in his announcement speech when he said, “I respect the President of the United States.” “He and I have a difference of opinion on how to help a country we both love. But the question each of us wants the voters to answer is who will be the better President, not who’s the better American.”

On his show, Matthews gushed that Huntsman’s line made a “tear come to my eye.” He then bragged, “Maybe I’m the great communicator at least once a week in my life.”

The campaign also includes print ads, like one with Matthews that ran in Newsweek, that liberals always “advance liberties” and defeat conservatives: “Over time, people who advance liberties tend to win the argument, whether it’s for women, African-Americans, immigrants or the gay community. In the end, America takes the side of the people looking for rights…Eventually we live up to our ideals.”

Rachel Maddow’s ads have her standing in front of the Hoover Dam (in one of them in a hard hat), arguing that infrastructure equals American greatness. “You can’t be the guy who built this, you can’t be the town who built this, you can’t even be the state who built this. You have to be the country that built something like this…We have to figure out if we are still a country who can think this big.” (There’s no disclaimer that the bill to build the dam was sponsored by two Republicans, and is named after a third. )

Ed Schultz was filmed sitting in a diner in Norfolk, proclaiming over a cup of coffee the need to protect people over profits. “This country was built on opportunity and equality for all. That’s how we got great.” He has so much to say, he claimed, “I need two shows.”

Schultz hasn’t felt like he’s treated equally in the MSNBC cast. The New York Post reported last summer that Schultz had a meltdown in the network’s “30 Rock” newsroom over being left out of 2010 election promos, shouting at staff, “I’m going to torch this [bleep]ing place.” Spike Lee could have filmed that, just like the end of his movie Do the Right Thing.

Joe Scarborough is the real stepchild in this TV family. He, along with “Morning Joe” co-host Mika Brzezinski, has an ad, too, but not one filmed by Spike Lee and not one you’re going to see in movie houses or on liberal websites. There’s no political substance in it but vague chatter about “even when the camera is off, America is always on.”

This ad campaign is especially audacious since the left in general have issued the talking point that the Fox News Channel is not a news outlet, but simply a conservative propaganda outfit. “Daily Show” fake-news anchor Jon Stewart made a hostile appearance on “Fox News Sunday” and after being presented with his repeated statements to this effect, he replied, “Who are the most consistently misinformed media viewers? The most consistently misinformed? Fox, Fox viewers, consistently, every poll.”

Stewart felt the need to apologize after the liberal-media site PolitiFact said he was wrong. A 2008 Pew survey found Sean Hannity watchers were better informed than…Jon Stewart watchers. But he refused to admit that liberal outfits like MSNBC had a bias. They only had a bias toward laziness and sensationalism—a claim that’s also rebutted all day during MSNBC “news” shows, but in their own commercials.

MSNBC president Phil Griffin told the Associated Press that his network should be one-stop “news” shopping for liberals. “MSNBC has established a sensibility, a position, a platform,” he said. “MSNBC stands for something and MSNBC is really the place to go for progressives and people who are looking for smart, thoughtful analysis.” “Smart” and “thoughtful” are not good descriptions of what’s coming through in its incessant, audacious commercials.

Federalist No. 80 “The Powers of the Judiciary”

Mr. Graham is director of media analysis for the Media Research Center in Alexandria, Va., and has testified before Congress about oversight of the public broadcasting system. He is the author of Pattern of Deception: The Media's Role in the Clinton Presidency.