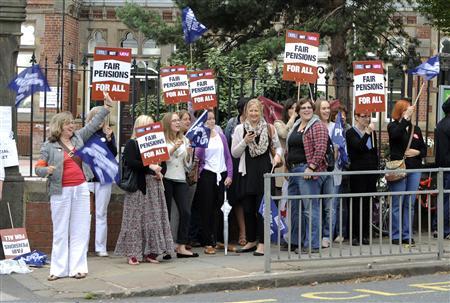 England is dealing with a massive public union strike today, “the first in what unions say will be a wave of action against steps by the British government that will cut the value of public sector pensions,” according to a Reuters report.  Thousands of strikers have clogged busy intersections, while 85 percent of British schools will be fully or partially shut down.

Striking primary school teacher Martin Pitcher grants us a look into the mind of the angry public union worker: “This country is being led by people who are privileged, people who earn too much money… The gap between rich and poor is getting bigger. We don’t think it should be us who are made to suffer for it.”

Another striker added, “We are here to protect our own pensions. We are also fighting for pensions and against overall government cuts generally.”

The same thing is happening in Greece, but with more exciting riots.  The Greek parliament sought to battle the absolute and total financial meltdown of their government with crucial austerity measures yesterday.  The UK Daily Mail tells us the result was bloody street battles between police and “demonstrators who were armed with petrol bombs, bricks, and sticks.”  A member of Parliament who had promised to vote against the austerity package, but changed his mind and voted for it, was pelted with stones.

What you see happening in England and Greece today is the inevitable future of Obama-style economics.  There is no escape from this destiny.  It’s only a matter of time.

Government is force.  It has only the money it takes by force.  It enforces its will through the threat of punishment.  Every government, from the smallest libertarian ideal to the bloated monstrosities dying in the streets of London and Athens, is nothing but an accumulation of compulsive force.

That sounds sinister, but it doesn’t have to be.  There are righteous uses of force.  If someone was trying to murder you, you would be very grateful if the police appeared and used an intense burst of force to protect your legal right to remain alive.  In a just and orderly society, the government has a monopoly on the use of compulsion, and deploys a minimal amount of it against the population.

What happens when a large number of people depend upon the government for their livelihood, through public employment and welfare?

The government must naturally grow larger to provide for these people.  It must seize more funding from the private sector, to pay the salaries and benefits of public employees, and finance welfare for the dependency class.  It must hire more people to administer these vast new funds… and their salaries must be paid.  As the State grows, it begins to crowd out the private sector, taking over functions that were once performed by free citizens, and it assumes control of goods that were once sold in the free market.  Crony capitalism, unfunded mandates, micro-managing regulations, and outright nationalization lurk upon the expanding borders of the State.

Because government is force, there comes a point where it can only be influenced through force.  As you can see in England and Greece, orderly democracy can only get public dependents so far.  The beneficiaries of government force stand ready to compel the payment of further benefits, when democratic resistance from the diminished private sector grows too strong, and public money simply runs out.

Public employees and angry dependents of the government are all protesting against the same employer and benefactor.  This results in solidarity, because the compulsive force they deploy through general strikes and riots is all directed at the same target.  They believe this target cannot “go out of business,” an apprehension that sometimes restrains the worst excesses of private-sector unions.  There is no point in making collective demands which destroy a private-sector employer, leaving the union with nothing.  But where is the limit on demands made of public treasuries that can never be “empty?”

Remember what that British teacher said: “We are here to protect our own pensions. We are also fighting for pensions and against overall government cuts generally.”  It doesn’t matter that the government has run out of money, or that the promises it made to buy votes in happier times were unsustainable.  These people are not really declaring war on their government – they’re declaring war on the private sector.  They want greater compulsive force deployed against those who have not yet been absorbed by the government, to seize more funding for their benefits.  They know they will not face any organized mobs of angry taxpayers who deny them. 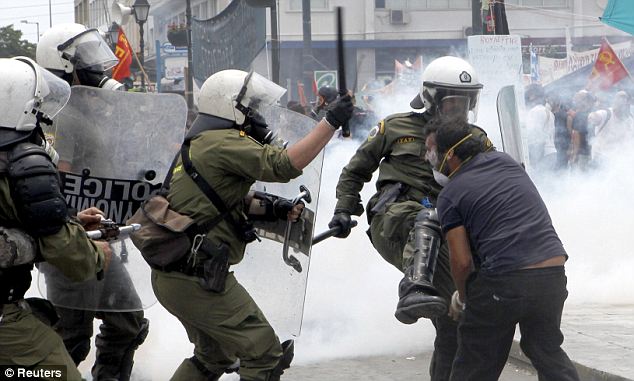 If such a mob of taxpayers appeared on the streets of Athens, they would be showered with stones and fire bombs.

Every government is either the ally, or the enemy, of law-abiding private citizens.  The sole factor controlling that relationship is the size of the State.  A large government will always become the enemy of its people, because those who depend on the government will eventually, and inevitably, insist upon it.

The path Barack Obama has set for America always ends with angry public employees and welfare dependents “fighting for pensions, and against overall government cuts generally.”  The only detail left to be sorted out is their choice of weapons.

MSNBC Is Not Dicking Around

We Need Growth, Not Higher Taxes