Will Palin Step Into the Ring With Obama? 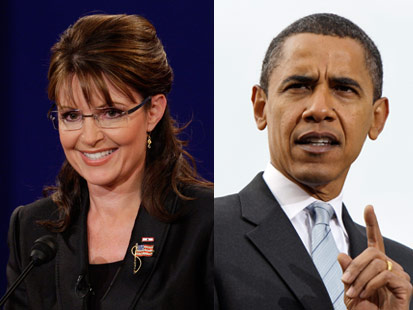 It is a title fight many want to see in 2012.  It would be the city-dwelling intellectual against an exurban, reform-minded populist from the frontier.  It would be bold liberalism squaring off against bold conservatism.  It would be the political equivalent of Manny Pacquiao vs. Floyd Mayweather.

Palin has been a thorn in the side of the Obama administration.  She has attacked him and proposed substantive policy proposals that would be better solutions than Obama’s in nearly every arena.

She has presciently predicted the problems with quantitative easing—inflation and rising food and commodity prices—that lower the standard of living of Americans.

For one day, at least, this captivating general election matchup was teased, when Obama and Palin were both in Iowa yesterday.  Neither mentioned the other or took on the other in any way.  But both had to know of each other’s presence in a swing state that propelled Obama to the nomination in 2008, and if she decides to enter, could have a similar role in legitimizing and kicking off Palin’s march to the nomination.

At Alcoa Davenport Works Factory in Bettendorf, Iowa, Obama discussed manufacturing’s role in an economy he is steering toward bankruptcy and insolvency.

The buzz, though, was a little to the west in Pella, where Palin attended the premiere of The Undefeated, a documentary directed and produced, independently of Palin, by Stephen K. Bannon, who said he made the film because he saw it as an opportunity to turn a profit, as a capitalist venture.

According to numerous reports, members of Organize4Palin, a grassroots group of Palin supporters unaffiliated with the Palin campaign, were out in full force.

The screening of the movie was sold out, as was the barbecue held after the screening, where, according to various estimates, more than a thousand people showed up.

Of course, the big question that hovered around Palin was whether she would run.

The day offered some clues.

Earlier, her daughter Bristol told Fox News that Palin had decided whether she was going to run for President.

When reporters asked her about Bristol’s comments, Palin told Fox News that she had not heard Bristol’s remarks but texted her and asked, “What did you say this morning, honey?”

Palin said that a lot goes into a decision that is “life-changing” and “relatively earth-shattering.”

Perhaps Palin and her family made a decision once and for all on a fishing boat.

If so, it would be a rich resonance of when Palin was introduced to the world in Dayton, Ohio, in 2008 as John McCain’s vice presidential choice.  Palin said “a ship in harbor is safe, but that’s not why the ship is built.”

Perhaps Palin has decided that she’s ready to set sail on a potential journey to the White House.

If Palin runs for President this time around, whether she wins or loses, she will have done it her way.