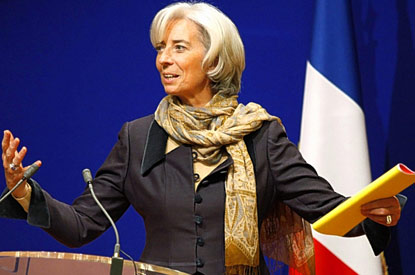 Once the news came out Tuesday morning that the U.S. would support Christine LaGarde, the race for managing director of the International Monetary Fund (IMF) became an anticlimax.  With Russia, China, Europe and the U.S.—the IMF’s largest shareholder with 16.8% of  its shares— in her camp, French Finance Minister LaGarde easily secured the IMF helm over Mexican Central Bank President Agustin Carstens.

So the financial titan’s 65-year tradition of answering to a Western European as its managing director remains unbroken.  Carstens and former IMF top economist Stanley Fischer of Israel (who, at 67, was disqualified from running for being over the maximum age permitted for a candidate) had both criticized this tradition, and declared it was time to give the developing nations a chance to run the IMF.

Most European journalists who cover the IMF had long assured HUMAN EVENTS that, as resonant as the message of Carstens and Fischer was, there was no way that the directors of the fund were going to make such a dramatic break with tradition at such a critical time.  Along with the spectacular arrest of former IMF head Dominique Strauss-Kahn, aka “DSK,” last month and his resulting resignation, the fund is the center of  worldwide controversy over the bailouts it crafted for three European countries headed toward bankruptcy: $157 billion for Greece, $122 billion for Ireland and, most recently, $116 billion for Portugal.

As nervousness mounts over Greece and the other bailout beneficiaries defaulting on their loans, so does U.S. worry over the $108 billion President Obama requested and Congress approved for the IMF in 2009.  Last week, Rep. Cathy McMorris Rodgers (R.-Wash.) spelled out to HUMAN EVENTS the details of her legislation to rescind IMF authority to spend the $108 billion and to secure the return of any unused tax dollars from that package and apply it to the deficit.  So far, McMorris Rodgers’ bill has 15 co-sponsors in the House, and Sen. Jim DeMint (R.-S.C.) has introduced a similar package in the Senate.

So how will the IMF’s first woman managing director deal with this gathering storm?

McMorris Rodgers and other congressional critics of the IMF have long complained that there is an utter lack of transparency in both the organization and its supporter in the Obama administration.  As she told us, “The IMF has not been forthcoming in what it has done with our $108 billion.  At this point, neither the IMF nor [Secretary of the Treasury Tim] Geithner has let us know how much of it there is left for us to recover.  We just can’t go on this way.”

More than a few IMF watchers believe LaGarde is likelier than her predecessors to promote an “open-door” policy with the U.S.—if for no other reason than she has the closest ties to the U.S. of perhaps anyone who has held the job.  Educated at the Holton-Arms school in Maryland, perfectly fluent in English, she worked on Capitol Hill for former Sen. (later Defense Secretary) William Cohen (R-Maine) and later served six years as chairman of the Baker & McKenzie law firm in Chicago.

It is unclear whether she will radically change or even halt any of the eurozone bailouts.  LaGarde has a record of supporting the bailouts crafted by Strauss-Kahn.  Her point of view, former IMF chief economist Simon Johnson told Business Week, was “ ’Let’s do a full bailout.’ ”  Business Week also pointed out that in running for the top job at the IMF, LaGarde has said that Greek debt restructuring is “off the table.”

Two things seem certain about the 54-year-old LaGarde: that she assumes the top job at a more critical and uncertain time than any of her predecessors, and that what she does will be more closely watched than any actions of the others.