Yes, Debbie, You Own This Economy 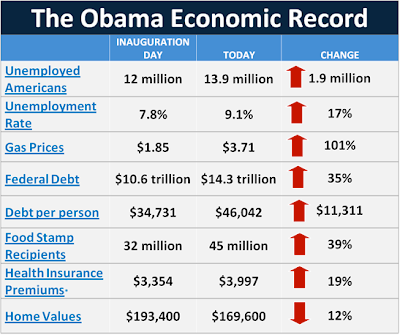 We have a very simple request for Debbie Wasserman Schultz: Just keep talking.

“We own the economy. We own the beginning of the turnaround and we want to make sure that we continue that pace of recovery, not go back to the policies of the past under the Bush administration that put us in the ditch in the first place,” Wasserman Schultz told Mike Allen at POLITICO’s ‘Playbook Breakfast.’

Courtesy of the Washington Examiner, you can see the “pace of recovery” DWS speaks of. An impressive record, isn’t it? Yes, Debbie, you own it, Obama owns it, the Senate Democrats own it, the Congressional Democrats own it, and your media cheerleaders own it. You have to defend it. It’s not Bush’s record. It’s Obama’s record.
Good luck defending it.
Share
Next
ARCHIVE

Without Government-Shrink, Sen. Ron Johnson's Voting No on Debt-Limit Hike