CNN: The Most Busted Name in News

CNN apparently has been trying to lure back viewers since they’ve fallen way behind Fox News in recent years but managed to embarrass themselves on a grand scale Monday night with their  absurd debate format, which included idiotic “this or that” questions from moderator John King. It’s safe to say GOP voters likely won’t be rushing back after witnessing that debacle.

Now this morning the “Most Trusted Name in News” brings us this story from CNN Money, with a headline using the pejorative “wingnut” over a photo of New Gingrich, Sarah Palin and Marco Rubio: 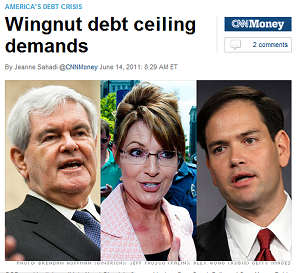 Anyone who’s been even a casual reader of leftwing blogs over the years knows “wingnut” if the favored insult toward conservatives, as defined here, so it’s not as if the author, already known to be biased, is unfamiliar with the term. Whether she wrote the headline herself is unknown, but either way, something like this should never appear on a news story.

This article was posted at CNN at 8:29 ET this morning and still stands as over three hours later. We can’t wait to see what excuse they use for posting the offending headline.

No doubt the non-biased observers at Media Matters are feverishly working on an article denouncing this revolting bias shown by CNN.

Update: CNN updated the story after nearly six hours after a wave of scorn from blogs and then a mention from Rush Limbaugh. They simply have a new time stamp, no mention that it’s updated, sent Wingnut down the memory hole, and replaced it with the much more respectful term Goofy.

The Perkins Bankruptcy: Your Obamanomics Success of the Day