"The Undefeated:" Documentary Seeks to Reset Conventional Wisdom on Palin 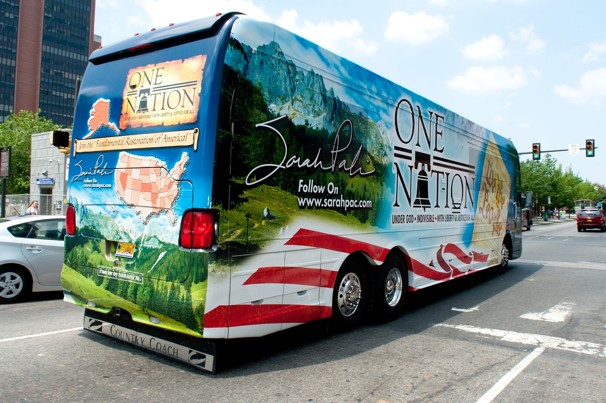 Conventional wisdom says that former Alaska Gov. Sarah Palin will not run for President. It also assumes that because Palin is widely known, so too is her record, past accomplishments, and life story.

A documentary titled “The Undefeated” will serve as the great reset button, resetting the conventional wisdom about Palin, her record, and the assumptions that have been made about her regariding her 2012 intentions.

The movie will debut next month in Iowa, New Hampshire, South Carolina, and Nevada, coincidentally the states that hold the first four 2012 GOP nominating contests.

The film’s director, Stephen K. Bannon, made the film independently of the Palin’s, and told HUMAN EVENTS that he took on the project and financed the film himself because he saw it as a “good commercial venture.”

During the better part of the year that Bannon spent putting the film together, he managed to make the project leak-proof by working on weekends and holidays and asking for and obtaining copious amounts of information on the film’s topics. Nobody was able to even infer that a project about the Palin’s was in the works.

While making the film, Bannon said that what he found most surprising about Palin was how she never really publicly spoke of her record of reform in Alaska.

“I think that’s because her parents raised her to not brag about her accomplishments,” Bannon said.

I was one of the first people Bannon screened the film, and my impression after watching the film was that Bannon was acting as her de facto speechwriter.

To me, “The Undefeated” is a conventionally unconventional stump speech, and an opening act of what may be a presidential campaign.

The first part of the film is mostly biographical, and focuses on Palin’s humble roots. It also details how Alaska has commercially grown, and the impression I took away was that Alaska is really a big exurb.

The film then chronicles how Palin took on the Alaska “good old boy” establishment and won in the political and policy arenas.

“The Undefeated” laboriously details how Palin grasped issues involving energy, particularly regarding the oil and gas pipeline, in Alaska. There are parts of the film that are so wonky and policy heavy that it leaves the viewer to think of how Palin could be a dummy and still master these complex subjects.

The film then highlights Palin’s fantastic 2008 convention speech and the way the liberal establishment tried to take her down after that night.

After the 2008 election, Palin had to swat one frivolous lawsuit after another away, and Bannon portrays a figure who was looking bankruptcy in the eyes due to the enormous legal feels that were being imposed on her while being hamstrung from doing her job of effectively governing Alaska. Bannon portrays Palin as someone who resigned so that Alaska would not take a step back.

The last part of the movie deals with how Palin became the face of the Tea Party movement in the lead up to the historic 2010 midterm elections.

The movie’s last act is titled “From here, I can see November.”

I took away five distinct points from the movie.

First, this movie will reaffirm what Palin supporters like about her while presenting a solid case to those who may be on the fence about Palin that she cannot only be a strong executive but that she can and has had a history of winning over independents in the political and policy fronts.

Second, should Palin enter the presidential contest, her path to the nomination may eerily resemble her path to Alaska’s governorship. In Alaska, Palin resigned from the Oil and Gas commission, defeated an incumbent establishment governor of her party for the nomination, and then went on to win the general election. Should she enter the 2012 contest it would be after she resigned from Alaska’s governorship, and she would have to defeat the GOP establishment — hellbent on throwing tacks and obstacles in her path at all costs —  to get the nomination.

Third, Palin’s anti-establishment nature resembles Reagan. Two of the most powerful moments of the film come when conservative Andrew Breitbart basically implies that the Washington GOP establishment machine is full of soulless cookie cutter types. Even more powerful is when influential conservative author and talk radio host Mark Levin compared Palin to Reagan, and how the same types of people who dismissed and hated Reagan are the ones that are cutting Palin down right now.

Fourth, should Palin run, the movie offers a blueprint of what her opening argument will most likely be to voters. She will highlight her biography.

“She represents some of incredible humble origins who has not been connected to the establishment through wealth, husband, social, or academic ties,” Bannon said.

She will highlight her record of bipartisan, results-oriented reform in Alaska, wherein she accomplished more in half a term as governor than most governors accomplish in two terms.

She will hang a proverbial lantern on her problem (being derided as a “quitter” or a “half-term governor”) by saying she had to resign to move Alaska forward.

She will then imply that even though she did not have a formal title, she was able to affect change as a private citizen in the lead up to the 2010 midterm elections and how she is best positioned both stylistically and substantively to be the GOP’s nominee to fight President Obama and his liberal agenda in 2012.

And as was evident during her week-long bus trip, Palin’s retail skills are phenomenal, and the movie hammers this point home.

Fifth, the movie is heavy on themes of American exceptionalism. The implication is that Palin and Obama see two different versions of America, and Palin’s view of America, culturally and policy-wise, is the one that is worth restoring, reviving, and renewing to get America back on sound economic footing while also not losing sight of the enduring and exceptional characteristics that have and will make America, as Lincoln said, man’s last, best hope.

Bannon says he is looking for the perfect venue that fits with the anti-establishment theme of the movie where he can debut his film to a mass and commercial audience in Iowa next month.

Bannon is not sure if Palin is going to run for President, saying that decision rests with her and her family.

“If she decides to run, everything about her campaign will be unconventional, she’ll keep her opponents off guard,” Bannon said. “She has the retail skills of a Bill Clinton, and she’ll make up rules as she goes along.”

Bannon said he titled the film “The Undefeated” in part because Palin fights for  “the values that she stands for and represents — the American spirit that is found on the frontier — and those values cannot be defeated.”

The film ends with clips of Palin at what may go down as iconic rally in Madison, Wisconsin, in which Palin urged Republicans to “fight like a girl.” The last scene in the movie shows Palin looking into the camera at that rally and saying, “Mr. President, game on!”

The movie’s ending, like the movie itself, seems more like the end of the beginning of something greater that’s coming on the horizon.