Palin To Go On Bus Tour, May Add Fuel To Fire In Her Belly 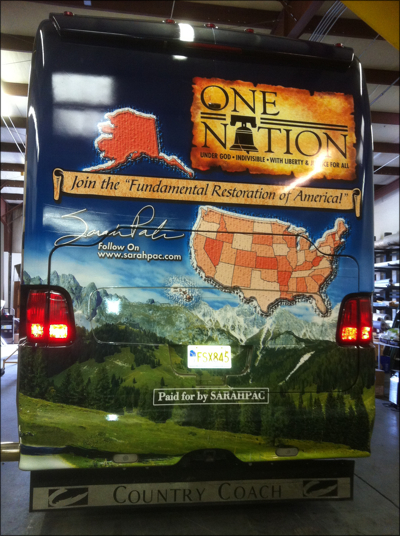 And just like that, former Alaska Governor Sarah Palin proved yesterday how she can dominate a media cycle, as she again stoked speculation about whether she will run for president.

Yesterday, Palin announced she would embark on a bus tour that would begin Memorial Day weekend in Washington, D.C., as she joins the Rolling Thunder bikers. The tour will take her along the east coast and will take Palin to historical sites in the New England area and areas near New Hampshire, site of the nation’s first primary. She will visit other sites like Gettysburg and the Liberty Bell in Philadelphia.

“I’ve said many times that America doesn’t need a ‘fundamental transformation,’ instead we need a restoration of all that is good and strong and free in America!” Palin said in a statement on her political action committee site.

“As we look to the future, we are propelled by America’s past,” Palin said, in reference to the historical sites she will visit on her “One Nation” bus tour. “It’s imperative that we connect with our founders, our patriots, our challenges and victories to clearly see our way forward.”

The bus tour is likely to show Palin in the element in which she feels most comfortable — retail politics. It will also again display how Palin can dominate a media cycle and is most likely to remind the media and other potential GOP candidates of the huge crowds that Palin can command and draw.

The bus tour announcement comes in the wake of a report by Scott Conroy of RealClearPolitics that a documentary showcasing Palin’s record of pragmatic and conservative reforms while she was Alaska’s governor would debut in Iowa next month followed by showings in Nevada, South Carolina, and New Hampshire.

According to RealClearPolitics, “the film will also appeal to staunch Palin supporters who have long celebrated her biting rhetoric and conservative populism yet know little about her record in Alaska and have perhaps written her off as presidential material.”

The film’s director and producer, Steve Bannon, told RealClearPolitics that, “this film is a call to action for a campaign like 1976: Reagan vs. the establishment … Let’s have a good old-fashioned brouhaha.”

According to RealClearPolitics, in the film influential conservative talk show host and scholar Mark Levin compares Palin to Reagan, who was also an insurgent distrusted by the GOP establishment . The film, according to RealClearPolitics, has a caption that reads “From here, I can see November” and ends with the iconic scene from a Tea Party rally in Madison, Wisconsin in April in which Palin urged the GOP establishment to try to “fight like a girl” and said to President Obama, “Mr. President, game on!”

Further, last week on “On The Record” on Fox News Channel, Palin told Greta Van Sustern that she had the “fire in the belly” to run for president. She also then told Judge Pirro of Fox News that her goal was to make Obama a one term President. And numerous outlets confirmed that the Palins had bought a home in Scottsdale, Arizona, where a potential presidential campaign would be headquartered. Arizona would represent the exurban frontier ethos that Palin personifies.

Palin has also reiterated the insinuation that the last hurdle between her and a run for the presidency was how the process would impact her family.

But could her family have already decided in the affirmative regarding a presidential run?

When Palin stepped down as Alaska’s governor, Palin said she decided to resign after polling her children. Palin said she asked them if they wanted her “to make a positive difference and fight for ALL our children’s future from OUTSIDE the Governor’s office?”

Palin said the response was “four ‘yes’s’ and one ‘hell yeah!’”

“The ‘hell yeah’” sealed it, Palin then said.

Palin also said “someday I’ll talk about the details” of the vote; this week’s announcements indicate Palin may soon reveal that the “hell yeah” was in reference to a run for the presidency.

With the historically themed bus tour it may not be too crazy to wonder if Palin will explain that her family said “hell yeah” and gave her the green light to run for the presidency in an announcement on the fourth of July.