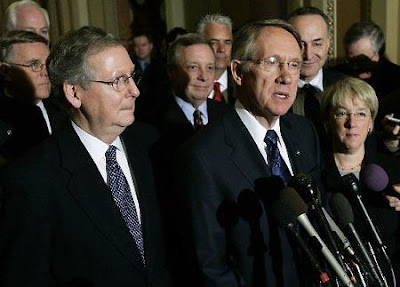 The Senate on Monday gave the green light to renew several provisions of the Patriot Act, but the measure is expected to face some opposition when it reaches the House later this week.

“It’s not a perfect law, but it plays an important role in keeping our country safe,” said Senate Majority Leader Harry Reid (D.-Nev.).

The bill extends the use of certain law enforcement tools to catch terrorists and was first enacted after the Sept. 11, 2001, attacks on New York and Washington.

It allows for the search of certain business records, roving wiretaps, and surveillance on “lone wolf” actors planning attacks on the U.S.

The cloture vote passed 74 to 8 and clears the way for final passage in both chambers later this week.

“Given the indefinite threat we face from acts of terrorism, my views are we should permanently reauthorize the three expiring provisions,” said Sen. Chuck Grassley (R.-Iowa).

“They don’t like us.  They want to kill us, and we’ve got to prevent that,” Grassley said.

“Now is not the time to place new restrictions and high evidentiary standards on critical national security tools,” Grassley added.  “If it ain’t broke, don’t fix it.”

The Patriot Act is backed by Democrat and Republican leaders in the House and Senate, who reached an agreement last week to pass the reauthorization before it expires on Friday.

The legislation hit a hurdle in the House earlier this year when 27 Republicans broke ranks and sided with liberal Democrats to oppose the reauthorization.

Sen. Rand Paul (R.-Ky.) opposed the provisions and said that Americans were so frightened after Sept. 11, they allowed lawmakers to take away many of their freedoms.

“Some say that if you have nothing to hide, why do you care?” Paul said.  “It will not always be angels in charge of the government.  We want rules in case someone takes over the government intent on using these tools to pry into our … political affiliation or religious beliefs.”

To protect the U.S. against terrorist attacks, Sen. Dianne Feinstein said, “we as a nation rely on certain secret sources and methods.”

In light of the recent capture and killing of Osama bin Laden, the Patriot Act will be instrumental in following up on a treasure trove of intelligence collected from his hideout, she said.

“This is a time when our vigilance must be heightened as well,” Feinstein said.

“This provision may well prove critical to thwart new plots and find new terrorists,” Feinstein said.  “They must be renewed.”