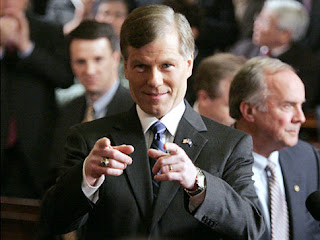 Barack Obama needs the “guts” to take on entitlements.

That’s Virginia Gov. Bob McDonnell making it explicitly clear that the President has failed to offer any kind of leadership when it comes to the biggest financial crisis facing our country: debt and deficits.

“There’s no way for America to get out of $14 trillion of debt if we don’t take on entitlement spending,” McDonnell told HUMAN EVENTS.  “We’re at about 72% of GDP [gross domestic product] right now that’s tied up in debt, at $14 trillion, and we’re growing.  This whole battle is coming up in a few weeks over the expansion of the debt limit because we can’t pay our bills unless we borrow more money.”

The governor is exactly right.  Not only has Barack Obama exploded our government spending during his time in office, his solution to tackle our limping economy and massive red ink is to … tax the rich!  Yeah, like we haven’t heard that one already.

McDonnell also praised Paul Ryan’s budget as “thoughtful” and “innovative.”  He particularly likes Ryan’s idea of block-granting money to the states for Medicaid, noting that governors “can run it in a way that is less expensive for the federal government and with more creativity and more flexibility than the way Congress is doing it.”

“His ideas on Medicare are good as well,” McDonnell added.