'We Can Grow Our Way Out of Hard Days' 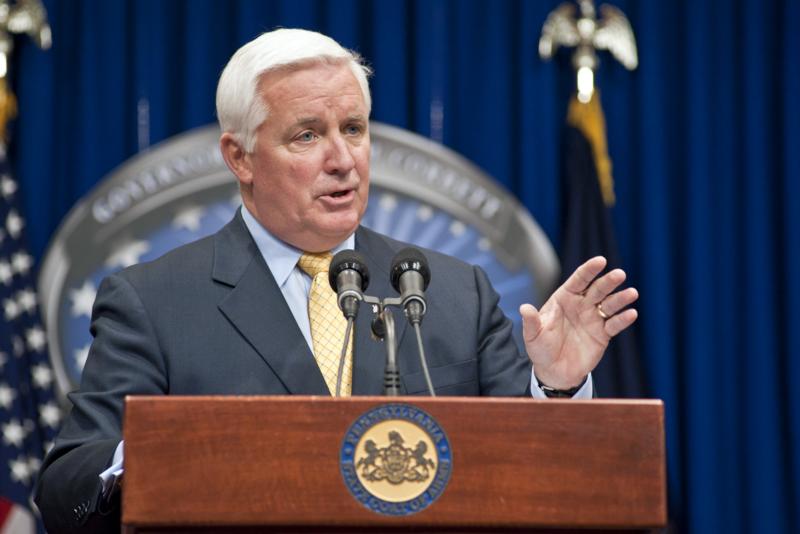 Pennsylvania Gov. Tom Corbett’s predecessor, Democrat Ed Rendell, was nicknamed “Spendell” for his reckless handling of the Keystone State’s coffers.  According to the Commonwealth Foundation, a nonprofit public policy research institute based in Harrisburg, during his eight years as governor, Rendell increased the state operating budget by $21 billion, roughly 45%.  The state’s out-of-control borrowing tripled budgeted interest payments, while increasing debt held by state agencies by 93%.  Even more shocking is that every Pennsylvania taxpayer owes almost $10,000 in state and local government debt.

And you thought our federal government had a spending problem?

That is why in November 2010, the citizens of Pennsylvania brought real change to Harrisburg in the form of former no-nonsense state Attorney General Tom Corbett.  And Gov. Corbett hit the ground running, trying to clean up the $4.2 billion budget deficit left by his predecessor.

“I actually sat down with the budget people.  I went through the budget line by line, item by item,” Corbett remarked.  “I haven’t used the printing machine that Washington uses for money.  It’s not here in this building, and we have to have a balanced budget.”  Corbett’s ambitious $27.3 billion budget proposal has drawn ire from many people in Pennsylvania, especially because of the cuts to education, including higher education.

In his budget address, the governor called for the school districts to enact a voluntary freeze on personnel, including administrators, teachers and support staff.  “If they [school districts] gave us a one-year freeze, that would have amounted to about $400 million across the State of Pennsylvania for the school districts to save to get through a very, very tough year.”  Many teachers unions expressed their displeasure at the outset of the budget announcement and have held rallies in Harrisburg, protesting the governor’s proposed cuts.  Corbett realizes their frustration, but notes that the public-sector unions, including the teacher unions, “are the only ones to continue to receive increases in salary.”  That’s why he has called for a freeze.  Corbett believes everyone should be forced to tighten his belt.

Building Around the Child, Not the Other Way Around

In a speech before the American Federation for Children on May 9, 2011, in Washington, D.C., Corbett outlined his hopes for comprehensive school-choice legislation in Harrisburg.  “Two things are abundantly clear:  No spoon is going to fall upwards unless we amend the law of gravity.  And no school is going to change unless we change the culture in which it exists,” Corbett told the education group.  The Pennsylvania legislature has something already in the works.  Senate Bill 1, as it’s called in Harrisburg, allows low-income children trapped in the persistently lowest-achieving schools to attend the school of their choosing in the first year of implementation.  By the third year, all low-income students, regardless of school, will be afforded such an opportunity.  Poor students will be granted financial assistance that is equal to 100% of the state’s annual per-pupil funding.

It’s not just the states that are feeling the groundswell of protest against failing public schools.  Even the behemoth federal government is starting to realize the efficacy of school choice as a means of turning things around.  As HUMAN EVENTS has reported, Speaker of the House John Boehner (R.-Ohio) passed his only legislation for the year (HR 471) with bipartisan support.  It continues funding the D.C. Opportunity Scholarship Program (OSP), which provides scholarships of up to $7,500 for low-income children living in the nation’s capital to attend a school of their choice.

“We have been doing the same things for decades, and scores aren’t getting that much better.  I think we need to try something new,” Corbett said.  “The proposed Senate Bill 1 is a good attempt to do that.”

Parts of Pennsylvania sit atop the Marcellus Shale rock formation that contains about 50 trillion cubic feet of natural gas—enough to supply the entire United States for two years.  It has a wellhead value of $1 trillion.  Not only is this a prime example of domestic energy alternatives to oil, the countless number of jobs and economic incentives to Pennsylvania are invaluable.  “We need to be developing what we have.  We need to be making markets for natural gas beyond just heating your home or powering your business and using it for electricity,” Corbett said when asked about the future of energy independence not only in Pennsylvania, but also nationally.  In the midst of President Obama’s unwieldy plan, which focuses on solar and wind energy, Pennsylvania could play an instrumental role in powering the future of America with its natural gas reserves.

As an example, Corbett believes that the state department of environmental protection’s fleet of vehicles should switch to natural gas power.  “That will, for one, clean up the air from everything that I’ve been hearing, but, two, it will be using the fuel that was developed here in creating a market.  So it’s considerably cheaper in that respect.”  This suggestion, like other natural gas/Marcellus Shale plans proposed by the state, has, of course, also come under fire from critics, but Corbett has a simple response to them:

The positive impact of drilling in the Marcellus Shale is unquestioned.  In a 2010 study conducted at Penn State University, it was surmised that in 2009, natural gas companies spent $4.5 billion to develop Marcellus Shale gas resources, which generated $3.9 billion in economic impact, $389 million in state and local taxes, and more than 44,000 jobs.  Now that’s a stimulus package.

When Corbett was working under the Rendell administration, he was one of the first attorneys general to sign on to the federal lawsuit against President Obama’s health care plan.  He also signed on when he became governor.  “I joined the Florida lawsuit, frankly, because I don’t believe that the federal government can tell people what they have to buy,” Corbett said.

Along the same lines, but particularly on Medicaid, Corbett is asking the federal government for flexibility, i.e., block-granting funds to the state, so that Harrisburg can decide how to use the money.  As Corbett said, “The states are not all the same, and you can’t make this a cookie-cutter type of legislation.”

A Return to Business Glory Days

Aside from cutting a bloated state budget, reforming the education system and ensuring energy independence, Tom Corbett has pledged to fight tort reform, privatize the state liquor stores and ensure the fiscal the future of Pennsylvania’s children.  Corbett is determined to return Pennsylvania to economic greatness, hearkening back to the days when cities such as Pittsburgh, Erie, Johnstown, Scranton, Philadelphia and Bethlehem were home to the titans of industry.

What Is the Minimum Wage?