Connect with us
The Buckeye State's crusading vanquisher of regulations that emasculated companies has a lot to be proud of lately. 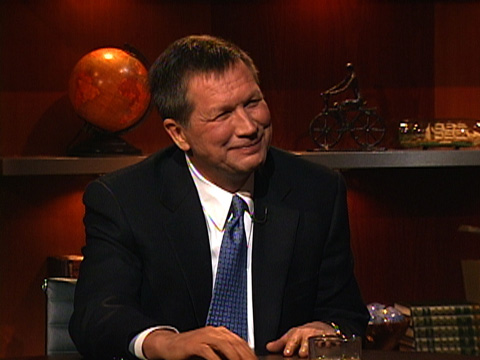 Anyone who interviewed John Kasich during his days in the U.S. House (1982-2000), and especially as House Budget Committee chairman (1994-2000), will recall that asking the Ohioan about budgets or spending brought forth a very lengthy answer.  Along with explaining the numbers and spelling out their long-term impact, Rep. Kasich would spice his talk with references to his passion for the music of the Grateful Dead and his love of basketball and tennis.

Now two weeks away from his 59th birthday, the father of two girls and governor of Ohio since January, Kasich has changed only slightly.  These days, he speaks less about music and sports and almost exclusively about his administration’s grappling with the deficit and the maw of regulations businesses in the Buckeye State have to face.

“We’re in this situation now because under the previous administration, mismanagement and mangled politics were the order of the day,” Kasich told HUMAN EVENTS last week, referring to the regime of the liberal Democrat he overthrew last fall, Ted Strickland and the Democrats who were formerly in control of both houses of the state legislature.

When he spoke to us from his office in Columbus, Kasich had a lot to feel triumphant about.  He had recently secured passage by the House(now in Republican hands) of a budget that, in his words, “pays off our state’s $8 billion deficit in one year and does so without raising a single tax.  And we’re also going to get to keep a cut in taxes that the legislature passed years ago.”

Kasich quickly warmed to his subject.  The governor and his team, he recalled, “started off with protecting the powerless of society.  There were no cuts in child care or programs for the developmentally disabled or for the mentally ill.”

But, he quickly added, “We made cuts in just about every other program.  Some as much as 15%.”  To Kasich, balancing a budget “is not so much shutting down a particular program but reforming the program to make it more cost-efficient and more efficiently run.  We did that in many programs, including those dealing with corrections, Medicaid, K–12 and higher education.”

“If state government will just stop doing little things that get in the way of business,” Kasich insisted, “more businesses will stay here and more will come here, and you’ll see the economic revitalization of Ohio.”

In pursuit of this vision, the governor created a commission of experts (“people who can think outside the box”) to identify regulations that are stumbling blocks to job creation, and his administration will seek to get rid of them.  Moreover, working with state Director of Economic Development (and former HUMAN EVENTS intern) Nate Green, Kasich seeks to privatize the department of economic development.

“There will still be an entity within state government and someone like Nate overseeing things,” he explained, “but the functions of attracting new business to come to the state will be performed by a private entity.  It will be less costly this way, and will get more results.”

As a sign that the business community understands that the climate in Ohio is changing, Kasich pointed out that “four different companies changed their minds about leaving the state.  Now, our state dug itself in a deep hole [under former Gov. Strickland’s administration], and you can’t reverse bad behavior overnight.  But the business community here knows things are beginning to change and that the Kasich administration gets it.  We’re open for business now.”

In a separate interview, Green explained, “[T]he companies the governor saved from leaving Ohio are Bob Evans, Diebold and American Greetings.  The other company is Ruralogic, and we have helped them in-source IT work that was going to India and Africa but is now providing IT jobs in rural areas of Ohio.  They have two current operations and are looking to start a third.  They are going to create approximately 200 jobs in Ohio over the next three years.”

‘Profit Not a Dirty Word in Ohio ’

In so many ways, Kasich’s passionate promotion of his state as a site of jobs and opportunity is reminiscent of that of another Republican:  Ohio’s longest-serving governor (1962-’70, 1974-’82), James A. Rhodes.

Soon after Rhodes unseated Democratic Gov. Michael V. DiSalle to win his first term in 1962, wrote David Broder and Stephen Hess in The Republican Establishment, “Ohio began buying big ads in the Wall Street Journal and other business organs, showing Rhodes’ eminently common-sense face and the slogan ‘Profit is Not a Dirty Word in Ohio.’  Any businessman likely to locate a plant in Ohio can count on a call from the governor pledging his personal assistance in settling the deal to the company’s satisfaction.  Nor does Rhodes sit by and wait.  He led trade missions to Europe and Asia, opening state-financed offices in Brussels and Tokyo to promote markets for Ohio products.”

As Rhodes sought reelection in 1966, the number of native industries expanding in Ohio and the number of new companies moving in were both more than five times higher than in 1962.

“Yeah, I’m where Gov. Rhodes was coming from,” said Kasich, who served as a state senator during Rhodes’ final term as governor from 1978 to 1982.  “But remember—he didn’t have either a corporate or a personal income tax, and he didn’t have collective bargaining to deal with.”

Kasich’s mention of collective bargaining brought up the focus in the national press on the Ohio governor’s clash with public employee unions over his plan to have those on the public payroll pay a greater share of their health insurance.  With demonstrators crowding outside the state capitol with placards denouncing “Ka-SICK!,” the Republican-controlled legislature enacted landmark legislation requiring state employees to pay for 15% of their health packages.

Although Kasich signed the measure into law, the voters will have the last word on it in a statewide initiative this November.  The American Federation of State, County and Municipal Employees—with more than 350,000 members throughout Ohio —has made defeat of the change in health care payments its top priority.  Kasich simply says:  “We’ll win this.”

Working closely with two other conservative stalwarts who are the Republican leaders of the state legislature, House Speaker Bill Batchelder and Senate President Tom Niehaus, Kasich is laying out a long-term conservative agenda for his state.  Not yet formalized but still very much on their plate is a plan voiced during the 2010 campaign that would eventually repeal the state income tax.

At one point in our interview, I talked to Kasich about his briefly seeking the Republican presidential nomination in 2000 before leaving the House for a decade to work in investment banking and as a Fox TV host.  Would he consider another run for President in 2016, I asked, or at least becoming his party’s vice presidential nominee in 2012?

“No way,” he shot back.  “I’m not running for anything.  This is where the action is.  You’ll be hearing of and reporting about a lot of things that are happening in the states, especially Ohio.  Get used to it.”

Victims at the Sofitel