Immigration and Healthcare Will Shape Election 2012

With the country in debt and its economy in shambles, President Obama and Democrats decided to pass health care reform legislation known as ObamaCare, which would enable the federal government to force people to buy insurance, which essentially greases the slippery slope to a further encroachment of liberties.

And in an area where the federal government has a duty to act — namely enforcing immigration laws that are on the books — the Obama Administration has looked the other way on issues concerning border security particularly along the Southern border. This prompted Arizona to pass S.B. 1070 to essentially try to enforce the immigration laws that the federal government would not.

These two issues energized conservatives and Republicans during the 2010 election cycle and helped Republicans win a record number of seats in Congress in addition to many key governorships.

In the 2012 elections, health care and immigration will again be a prominent part of the backdrop, and the events of the last two days have proven it. 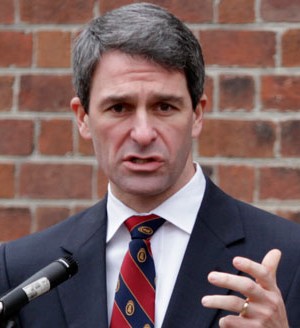 First, oral arguments were held in the 4th Circuit Court of Appeals yesterday. Virginia’s Attorney General Ken Cuccinelli and the United States Justice Department were arguing an appeal of the landmark decision by District Court Judge Henry Hudson that ruled the individual mandate of ObamaCare unconstitutional. Before ObamaCare was signed into law, Virginia had passed a Healthcare Freedom Act, which forbid the federal government from forcing Virginians to buy health insurance.

While Virginia won the first round, legal watchers noted that they probably won’t win this round, and the Supreme Court would be the final arbiter after a split decision. This will probably be so because the three-judge panel that was randomly selected by a computer did not favor Cuccinelli and Virginia. While the 4th Circuit has eight judges appointed by Democrats and five judges appointed by Republicans, the three judges randomly selected to hear the appeal were all appointed by Democrats (two of them were appointed by President Obama and the other by former President Clinton).

After the oral arguments, Cuccinelli told reporters that he felt the odds were good that the Supreme Court would ultimately render a final verdict on the matter in the fall of 2012, right in the heat of the election.

“Today we took Step Two in a three-step process… the legal questions raised today are questions that will be answered in another court in another time,” Cuccinelli said. “Virginia has argued that the mandate that every person must buy government-approved health insurance violates the Constitution.  Using the Constitution’s Commerce Clause to force people to buy a product goes beyond Congress’s power.  This is why I have said all along that this is about liberty, not health care.”

Cuccinelli said that “Virginia has a law – passed on a strong bipartisan basis – to protect Virginians from an individual insurance mandate.  We are in the Fourth Circuit today because the U.S. Supreme Court has said that every state may defend its code of laws.  In addition to protecting the U.S. Constitution, today we are also fighting to protect Virginia’s Health Care Freedom Act.”

According to Cuccinelli, “the federal government argued in court today that it should have unlimited authority in your lives, including the authority to regulate – i.e. dictate – your decisions, not merely your actions.  The questions from the panel today indicated the judges struggled with this unprecedented exercise of authority.”

Cuccinelli then smartly linked the government’s intrusion in health care with its lack of concern regarding immigration: “The federal government thinks it can tell the states to disregard their own laws – like it is doing with Arizona, but then also says the states do not have the same right to challenge federal laws in court.  That is not how our system of government is set up.  The founders set it up so the states were a check on potentially overreaching federal authority.”

A day earlier, on Monday, Arizona’s Gov. Jan Brewer announced, after the liberal Ninth Circuit Court of Appeals, based in San Francisco, ruled against Arizona’s appeal of an injunction against S.B. 1070 that is temporarily preventing Arizona from enforcing this law, that she would petition the U.S. Supreme Court to lift the injunction.

“For decades, the federal government has neglected its constitutional duty to secure the border. It is because of that negligence that Arizona was forced to take action to protect its citizens via SB 1070,” Brewer said. “Our issue is bigger than simply border security. It’s about the principle that a state must be able to protect the safety and welfare of its citizens, especially in the absence of sufficient federal assistance. I’m confident that Arizona will emerge victorious from this legal fight.”

By appealing this case straight to the U.S. Supreme Court, Brewer’s office said that “there is greater likelihood that legal questions surrounding SB 1070 will be resolved
quickly so that the law can begin to do its job.” Perhaps this is why President Obama traveled to El Paso, Texas, which stands on the frontlines of the brutal violence that has plagued towns near border to lobby for the DREAM Act, which Michelle Malkin and other conservatives have referred to as a nightmare.

In El Paso, Obama said “there are an estimated 11 million undocumented immigrants here in the United States.  Some crossed the border illegally.  Others avoid immigration laws by overstaying their visas.  Regardless of how they came, the overwhelming majority of these folks are just trying to earn a living and provide for their families.”

Obama then conceded that “we have to acknowledge they’ve broken the rules.  They’ve cut in front of the line.  And what is also true is that the presence of so many illegal immigrants makes a mockery of all those who are trying to immigrate legally.”

And then mocked Republicans by asking if Republicans wanted a moat on the Southern border with alligators in it notwithstanding the fact that Democrats could have passed the DREAM Act while they controlled both houses of Congress, and they failed to do so.

He then told the audience,  “and that’s where you come in.  I’m going to do my part to lead a constructive and civil debate on these issues.  And we’ve already had a series of meetings about this at the White House in recent weeks.  We’ve got leaders here and around the country helping to move the debate forward.”

Obama then urged the audience to sign up on a white house website to lobby for the DREAM Act.

Obama’s campaign strategy for 2012 seems transparent. He will try to convince minorities that Republicans are racist in order to galvanize blacks to the polls in record numbers. The same fear tactic will galvanize some Hispanics, and Obama is betting other Hispanics will be scared to the polls as Obama demagogues the immigration issue and demonizes Republicans.

After Obama’s immigration event, Brewer said that “after two years of waiting, I am glad the White House has chosen to focus on immigration. But I
remain skeptical. It would be a shame if this effort is more about locking down votes in 2012 than securing our nation’s border today.

Said Brewer: “They know that any talk of a path to citizenship is simply amnesty by another name. And they’re smart enough to recognize a political ploy when they see it…I’m afraid today’s announcement is simply more of the ‘promise something, do nothing, blame someone’ political spin we’ve become accustomed to hearing from Washington.”

With immigration and health care as a 2012 backdrop, Republicans will prevail if they maintain the wind that was at their backs in 2010 with an electorate that was appalled at the federal overreach in the health care arena and the complete lack of concern on the immigration front.

If Obama scares enough minorities, particularly in key Southwestern and mountain west swing states such as New Mexico, Nevada, and Colorado, Republicans will be in trouble.

But health care and immigration are two issues from 2010 that will not go away in 2012. In fact, both issues may intensify as the election gets near.

The Phoenix Rising for Phoebe Prince