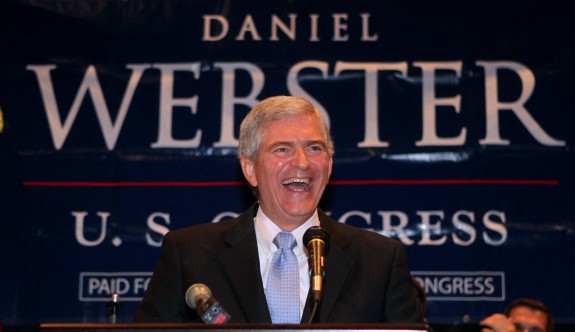 Conservatives in Florida and nationwide joked that by simply being elected to the U.S. House of Representatives last November, Republican Dan Webster had accomplished all he needed to merit a lifetime achievement award as a right-of-center hero.

After all, State Sen. Webster had won his Florida’s 8th District (Orlando) by unseating freshman Democratic Rep. Alan Grayson, one of the most obnoxious (and to many, personally offensive) liberal Democrats ever to serve in Congress.

In one term, Grayson had likened former Vice President Dick Cheney to a vampire and called Federal Reserve Board Chairman Ben Bernanke’s adviser Linda Robertson a “K Street whore.”  Most notoriously, Grayson, with an amazing lifetime American Conservative Union rating of 0%, had taken to the House floor to denounce the Republican alternative plan for health care as one that told Americans:  “Don’t get sick, and if you do get sick, die quickly.”

For Republicans of all stripes, that was too much.  In 2009, Rep. Joe Wilson (R.-S.C.) shouted, “You lie!” while President Obama was delivering the State of the Union Address.  He apologized for his outburst, but was nonetheless reprimanded by the Democrat-controlled House.  For his salvo, however, Grayson was never reprimanded by his colleagues.  To demands from the GOP that he at least apologize, the Floridian said he was apologizing “to the dead and their families that we haven’t voted sooner to end this holocaust in America .”

Simply put, Alan Grayson was an unbelievable boor.  In House-speak, “The gentleman from Florida” was no gentleman.

To Daniel Webster, who had spent much of his adult life as a legislator, Grayson crossed the line.  As a member of the minority in the Florida House of Representatives (and, after 1994, as its first GOP speaker since Reconstruction), Webster had been in the forefront of the push for just about every important conservative measure.  The same was true when he went to the state senate and became majority leader.

“But I never made a personal attack on anyone or engaged in any kind of inflammatory rhetoric,” Webster recalled.  After years of turning down suggestions that he run for the U.S. Senate or some other office, the veteran lawmaker declared for Congress.  No sooner had he handily won a crowded GOP primary than money from throughout the Sunshine State and the nation poured into Webster’s coffers.

“I have to say that we raised an adequate amount of money, and my opponent’s tactics contributed to that in a big way,” the conservative stalwart observed dryly.

The best sign of the progress his campaign was making was that Webster himself was soon an object of Grayson’s invective.  In a TV spot by the Democrat, Webster was shown saying, “Wives, submit yourself to your own husband.”  The ad went on to liken Webster’s votes in the state legislature on women’s issues to the Taliban in Afghanistan, and concluded with the narrator’s calling him “Taliban Dan Webster.”

“The clip was taken from a conference [of a nonprofit Christian group], and I was quoting the admonition from the Bible about husbands and their wives,” recalled the Republican.  “What I said was, don’t use the fact that Scripture says, ‘Wives, submit to your own husband’ but instead focus on what it goes on to say, ‘Husbands, love your wives.’  That’s quite the opposite of the meaning my opponent was alleging my remarks conveyed.  And when Rachel Maddow [of MSNBC] and Anderson Cooper [of CNN] agreed that his interpretation was ‘not confined to the truth,’ I knew I was going to win.”

A lot of voters in the 8th District apparently felt the same way as Maddow and Cooper.  Webster unseated Grayson by a convincing 56% to 38%.

One question from many political observers remained:  Was Florida’s Webster related to the legendary senator and presidential candidate from New Hampshire?

“I had an aunt who told me I was, but I never investigated it,” he said, “and I don’t possess the first Webster’s oratorical skills.”

To Raise or Not to Raise the Debt Ceiling

Like just about every Republican member of the House these days, Webster has been asked whether he will vote to lift the debt ceiling when he has to make that decision sometime in the next few months.

Like most of his colleagues, the Floridian believes it would be “great” to raise the debt ceiling in return for having the administration and congressional Democrats agree to a Balanced Budget Amendment and repeal of  “ObamaCare.”

Webster does not believe Armageddon will come if the debt ceiling is not raised immediately, because, “Look, the administration is already starting to take steps to deal with situations if Congress refuses to raise the ceiling.  As I see it, we will operate on a cash basis for a while, the government won’t be able to borrow, and the revenue that comes in will go immediately to pay for critical necessities: national defense and Social Security for starters.  I don’t buy ‘the sky is falling’ argument.”

“In all likelihood, he told me, “There will be strings attached, and we could raise it enough to finish by September what is spelled out in the budget measure we passed, but there will be limits on borrowing.  And perhaps we could tie lifting the debt ceiling to the enactment of the Ryan [House Republican] budget.”

“But the President will not get a clean debt ceiling vote,” Webster insisted.

Ever the legislator, Webster serves on the House Rules Committee, “where we are always working to open up the process and guarantee transparency.”  His goals in Congress are to make sure “we spend less, reduce the regulatory burden, and make sure we don’t penalize the job creators who will drive our economic recovery.  That means not raising taxes on any American wage-earners and lowering taxes if we can.”

At 61 (and a father of six and grandfather of seven), Webster says he’s “probably too old to serve a very long time.  But coming here when I did, with the experience and convictions I have, I hope I can at least turn the rudder of our ship of state a degree or two from where it is now.  I’m sure going to try.”

“Barack Obama Showed as Much Courage as Our Navy SEALs”