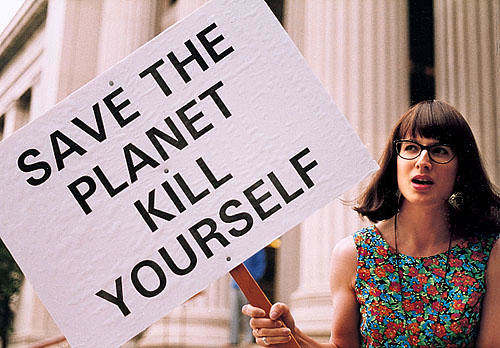 On this date in 1970, a trio of radical dreamers established Earth Day, an annual event designed to assault capitalism, free markets, and mankind.

The initial concept was conceived by then-Sen. Gaylord Nelson (D.-Wis.).  Nelson was Congress’ leading environmentalist, a sort of pre-incarnate Sen. Barbara Boxer in drag.  He was also the mastermind behind those ridiculous teach-ins that were vogue in the ’60s and early ’70s.  During the teach-ins, mutinous school instructors would scrap the day’s assigned curriculum, pressure their students to sit cross-legged on the floor, and “rap” about how America was an imperialist nation, and converse about why communism really wasn’t such a bad form of government—it just needed to be implemented properly.

Rounding out the troika was Prof. Paul Ehrlich of Stanford.  In 1968, Ehrlich authored the Malthusian missive, The Population Bomb, in which he infamously spouted wild allegations that included equating the Earth’s supposed surplus of people with a cancer that needs to be eradicated:  “A cancer is an uncontrolled multiplication of cells; the population explosion is an uncontrolled multiplication of people.  … We must shift our efforts from treatment of the symptoms to the cutting out of the cancer.  The operation will demand many apparently brutal and heartless decisions,” he wrote.

In 1969, following a much-hyped oil spill off the Santa Barbara coast, an overblown patch of fire on Cleveland’s Cuyahoga River, and the drug-induced vibes cast across the nation via the Woodstock Music and Art Fair, Nelson met with Ehrlich and reportedly said, “My God—why not a national teach-in on the environment?”  Hayes was brought into play a pivotal role with organization and implementation.  After careful consideration, a name and date for the event were chosen: the inaugural Earth Day would be celebrated April 22, 1970—Russian dictator Vladimir Lenin’s centennial.

Environmentalists have always admired Lenin.  He was the first disciple of Karl Marx to capture control of a country, and the opening act of his seven-year reign commenced with the abolition of all private property—a Marxist priority.  Despite overseeing a bloody civil war, a devastated economy, and a citizenry without hope, Lenin made it a priority to implement his signature decree, “On Land.”  In it he declared that all forests, waters, and minerals to be the exclusive property of the state, and he demanded these resources be protected from use by the public and private enterprise.  Selling timber or firewood, mining minerals, or diverting water for farming was strictly prohibited.

While Nelson and Ehrlich were already known as nontraditional crackpots, Hayes was that and more.  In a New York Times article published the morning after the first Earth Day headlined, “Angry Coordinator of Earth Day,” young Hayes bragged that five years earlier he had fled overseas because “I had to get away from America.”  Hayes was so committed to his anti-capitalist cause that he made sure his organization did not even produce Earth Day bumper stickers.  “You want to know why?” he explained to the Times, because “they go on automobiles.”

Earth Day has never been a celebration of the beauty and bounty of this awesome terrestrial ball.  Instead, it’s always been an assault on man.  During the first decade of Earth Day observances, people were proclaimed the polluter.  By the ’80s, the event’s organizers cast mankind as the tree killer, and, with the ’90s, humans evolved into the animal species annihilator.  The global warming scare never really became popular until the late ’90s, and when it did, it provided compatriots at the Earth Day headquarters with the ultimate hook on which to hang their red berets: humans, particularly Americans, were now screwing up the entire planet’s climate.

Today, rather than join in the Marxist folderol designed to hammer the American way, let’s give thanks for our nation’s abundant resources and dedicate ourselves to electing leaders who will reclaim our natural capital from the stranglehold of regulations, policies, and laws that are more in keeping with the tyranny of Marx than the liberty of Madison.