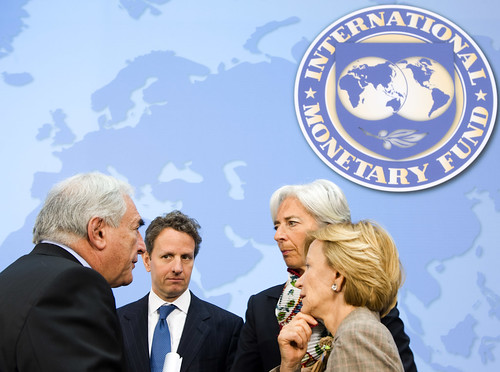 With the U.S. government barely avoiding a shutdown during recent budget negotiations and Congress soon to face a vote on whether to raise the debt ceiling, leaders of the international financial community are beginning to grow nervous over the impact overseas of an interruption in American government operations.

This nervousness about the ongoing budget process in the U.S. was apparent at the International Monetary Fund (IMF)/World Bank meeting in Washington on April 14 to 18.

Officially, no one was discussing the internal budget maneuverings of the U.S., which is the largest shareholder in the IMF.  French Finance Minister Christine Lagarde insisted to HUMAN EVENTS that there was “no discussion” by the G-20 (19 countries and the European Union) finance ministers as to what would happen if the U.S. debt ceiling were not lifted or a government shutdown occurred in America.

However, others officials from the 187 countries who belong to the IMF and World Bank as well as observers of the four-day economic summit were more than willing to talk about their fear of a possible shutdown in the U.S.

“Of course, we’re nervous about a government shutdown in the U.S!” an official of the Bank of Canada who requested anonymity told HUMAN EVENTS.  “We’re the largest trading partner with the U.S., so it goes without saying we were nervous watching the recent budget negotiations.”

The banker added that the “brinkmanship” in the process that led to the last-minute agreement between President Obama and the Republican-controlled House on April 8 caused particular concern in the Canadian financial community.

Bukhari Bello, director of legal services for the ministry of finance in Nigeria, was blunter:  “You can never shut your government down.  If you ever do that, the U.S. will be thought of as a nation that can’t manage its own fiscal houses and honor its financial commitments—just like Greece, Ireland, and Portugal [all three countries were so wracked with debt that they required bailout packages from the IMF and the European Union].”

Brian Atwood, chairman of the Development and Assistance Committee of the Paris-based international Organisation for Economic Co-operation and Development (OECD), said that the 34 member-nations of the OECD “are worried about it, all right.  In fact, when we thought the shutdown would be a reality [on April 8], that’s all we were talking about in Paris.”

The OECD, a 50-year-old group that helps encourage world trade and economic cooperation, is a descendant of a group that helped administer the Marshall Plan that was responsible for much of the rebuilding of Europe after World War II.  With that history obviously in mind, Atwood noted that “we have a major crisis in the Middle East today, and the U.S. is being counted on for leadership on the humanitarian front.  Look what a message it would be if there was a shutdown—that the U.S. can’t deliver.”