A Non-European Will Likely Be the Next IMF Boss 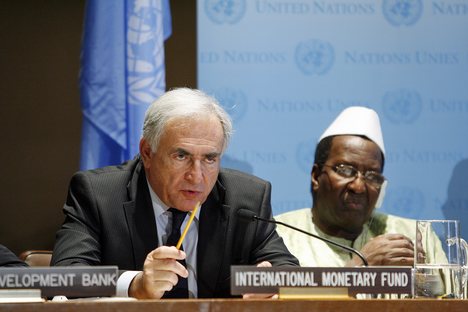 At the last International Monetary Fund (IMF)/World Bank meeting in the fall of 2010, talk was starting about someone from a developing nation becoming managing director of the IMF when and if the present IMF head, France’s Dominique Strauss-Kahn, steps down.  At the most recent conclave of the two financial titans in Washington on April 14 to 18, that talk grew louder, in part because developing countries are becoming more vocal about ending the European dynasty at the IMF helm.

Now there is also a political factor:  The former French finance minister, known as DSK, could well leave his post at the IMF by July to seek the Socialist Party nomination for president of France in 2012.  A just-completed poll among all French voters shows that if Strauss-Kahn were the Socialist nominee next year, he would top the race with 33% of the vote, followed by incumbent President Nicolas Sarkozy and National Front leader Marine Le Pen with 18% each.  (Strauss-Kahn has said he will announce what his plans are on July 13, the last possible date someone can file for the Socialist primary in the fall).

If there is an IMF head from outside Europe, it would be nothing less than historic.  Since the two financial titans were founded at the end of World War II, there has been a “gentleman’s agreement” that Western Europe would select the IMF head and the U.S. would choose the World Bank president.

Last week, participants at the IMF/World Bank conclave spoke increasingly and vigorously about the eventual successor to Strauss-Kahn coming from a developing nation.

“There has to be a new policy for selection of a managing director and [the IMF] could easily find a candidate from outside Europe,” said Delegate Abiodun Alao of Nigeria.  “[A non-European as managing director] would be a major part of reform of the institution.”

Asked where he felt the next IMF chief should come from, Alao replied with a smile: “Nigeria.”

At the last session of the world financial powers in the fall, there was discussion of a managing director from China—clearly a cause for concern among some of the participants.  At last week’s session, the discussion focused more on an Indian as IMF head.  One name that came up was that of Mr. S. Sridhar, chairman and managing director of the Central Bank of India.

The leading member-nations of the IMF have taken steps that portend Strauss-Kahn’s successor coming from outside Europe.  In 2009, an IMF committee headed by South African Finance Minister Trevor Manuel called for “an open, merit-based and transparent process for the selection of IMF management.”  (There has never been a formal vote for an IMF managing director, but rather general discussion and agreement by shareholders).

However, as the Bretton Woods Update (which follows the IMF and World Bank) reported this month, “The Fund has been publicly silent since the 2009 commitment.  In fact, two deputy managing directors have been appointed since then and have cemented some rich countries’ dominance of top positions; the three IMF deputy MDs are now from the U.S., Japan, and the U.K.”

Now the scenario of an opening in one of the world’s most pivotal financial positions appears likely.  Whether there is nothing short of a sea change in who leads the IMF will be a story sure to attract worldwide attention and comment.

DeMint: No More Debt Without A Balanced Budget Amendment